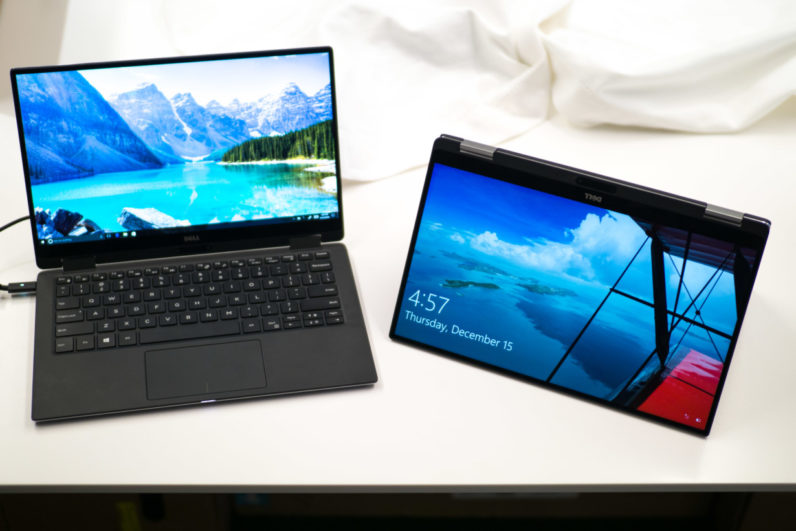 When I reviewed Dell’s XPS 13 last year, I called it a nearly perfect ultraportable – so long as you were looking for a traditional laptop form factor. But with 2-in-1 systems becoming ever more popular, I missed the ability to turn the laptop into a tablet.

Dell’s new XPS 13 2-in-1 has fixed that issue with a rotating hinge. The traditional XPS 13 is sticking around, mind you, but this is the one you’ll probably want.

At first glance, the XPS 13 2-in-1 looks very much like its predecessor, with the standout InfinityEdge display that does away with nearly all bezels except for the bottom one. Its combination of metal and soft-touch carbon fiber materials make for a classy design that’s also relatively easy on the wrists.

Look a bit more closely though, and the differences become more apparent. For one, the laptop is thinner than before, going from 8.7 mm thick at the front to 13.7 mm at the back. Add that Dell was able to remove the fans this time around, it’s an all-around sleeker design.

This is in part to make the laptop easier to use in tablet mode, which works exactly like you’d expect – push the screen around its hinge to use it in a ‘tent’ mode or as a tablet. The tent mode also mitigates the most recurring complaint on recent XPS 13 and 15 models: The webcam is located below the screen, perfect for a clear shot of your snot.

While that’s still the case here, as the bottom of the screen moves to the top when flipped around for tent mode, you can at least have video calls with a normal viewing angle, so long as you don’t need the built-in keyboard.

Another benefit to the tablet mode: Active Pen support. With Microsoft placing a bigger emphasis on pen support than ever, it’s a welcome addition, although it’s an optional purchase.

Also, this time around the laptop will come in an all black metal finish as well, which is perfect for us who prefer the stealth look.

Internally, the laptop is about what you’d expect from a Kaby Lake convertible:

The biggest question mark remains battery life. As always, it varies depending on your configuration. The base model, with 4GB of RAM, a Core i5 processor, FHD display, and a 128 GB SSD can hit 10 hours and 21 minutes, on a Netflix battery rundown, according to Dell’s own testing.

The screen and processor provide the biggest battery impact. The fully spec’d model with the QHD panel and the Core i7 chip is rated at 7 hours and 12 minutes for the same test, which involves streaming Netflix 1080p content using the Native Netflix Windows 10 app. Your mileage will vary, but Dell does sell a battery pack should you need up to 11 hours extra juice.

It’s also worth noting the use of a lower power consumption Y series processor, which enabled the fanless design and thinner form factor. While I had some concerns this would mean decreased performance, Dell says it should actually be a teensy bit faster than its Skylake predecessor. There’s still the risk the laptop could be more prone to throttling under heavy performance loads, however.

These are question marks we’ll have to address once we get our hands on a final review unit. If it all holds up though, Dell may have another winner in store. The XPS 13 2-in-1 will start shipping later this month, starting at $999.

Read next: This company just gave us a masterclass in bad customer service