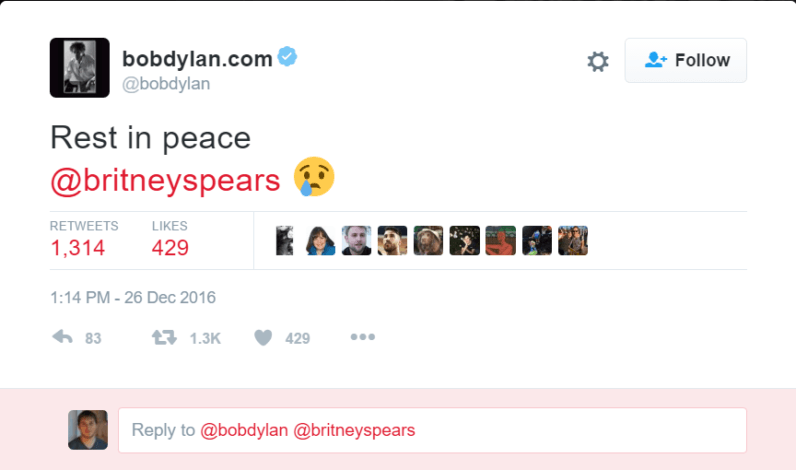 Earlier this morning, the Twitter accounts for Sony Music Global and Bob Dylan announced that troubled pop singer Britney Spears had died. But thankfully, it turns out that she’s still with us, and rather had fallen victim of a cruel hoax.

So, what happened? A few hours ago, the Sony Music Global account tweeted ‘RIP @Britney Spears’ with the #RIPBritney hashtag. This was followed up with another cryptic message that said she is ‘dead by accident [sic]’, and more information would follow soon.

This had many people skeptical, as it didn’t look like it was written by a native English speaker, and multi-billion dollar record companies don’t typically use the crying emoji in death announcements. It’s a bit insensitive.

It also appears that legendary troubadour Bob Dylan’s account was also compromised. Around the same time, he broke from tweeting near-exclusively about his upcoming vinyl releases to post “RIP @Britneyspears” along with, yes, a crying emoji.

I can’t imagine Bob Dylan using any kind of emoji, but I guess the times, they are a-changing.

It’s not immediately obvious who is behind this hoax. A few minutes ago, Dylan’s account posted a (since-deleted) message that declared gray-hat hacking group OurMine ‘checked Britney Spears twitter account if it’s hacked or not and they detected that it’s hacked!’ along with ‘@britneyspears is still alive!!’.

OurMine has been behind a number of high-profile hacks, having previously compromised the Twitter accounts of Jimmy Wales, Jack Dorsey, and Mark Zuckerberg. The group has also hacked the websites of TechCrunch and Buzzfeed. But it can’t be definitively determined whether this stunt was actually the actions of OurMine, or the a rival group pretending to be them.

For those still concerned about the wellbeing of the Toxic singer, don’t be. A representative for Spears has confirmed to CNN that she’s still alive. And I think we can all agree that starting a death hoax, especially immediately after Christmas and in the wake of George Michael’s death, is exceptionally shitty.

Read next: Stop coveting the skills you don’t have