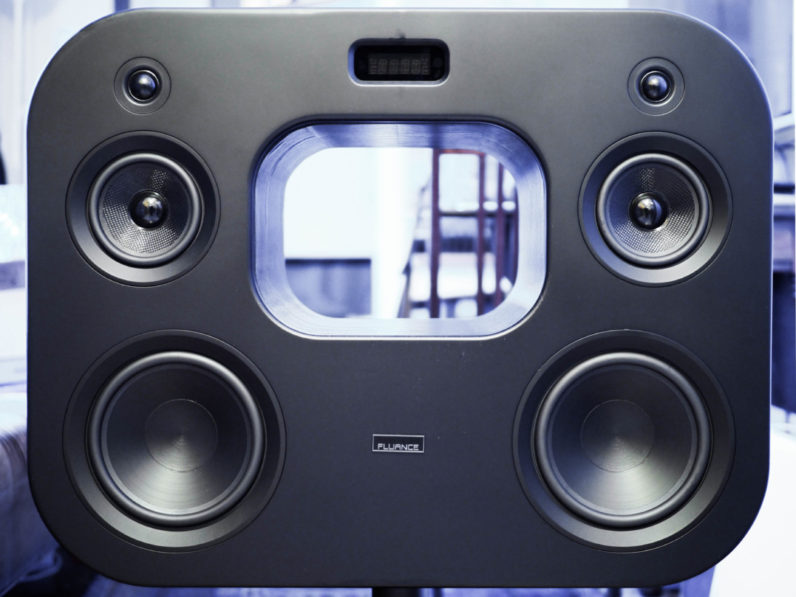 Colloquially speaking, Bluetooth speakers are synonymous with portable speakers. But audio company Fluance doesn’t give a darn about your preconceptions.

Fluance’s Fi70 are pretty much the biggest Bluetooth speakers you can buy. It’s an all-in-one sound system is almost comically huge, but also kind of awesome in its eccentricity.

When I took a glance at the press release and images, I knew the speaker’s were somewhat larger than average, but that did not prepare me for the 100 pound box that I had to carry up my 5 floor walk-up on my own. The UPS guy was basically like “I’m sorry man I can’t do this one.” I don’t blame him. 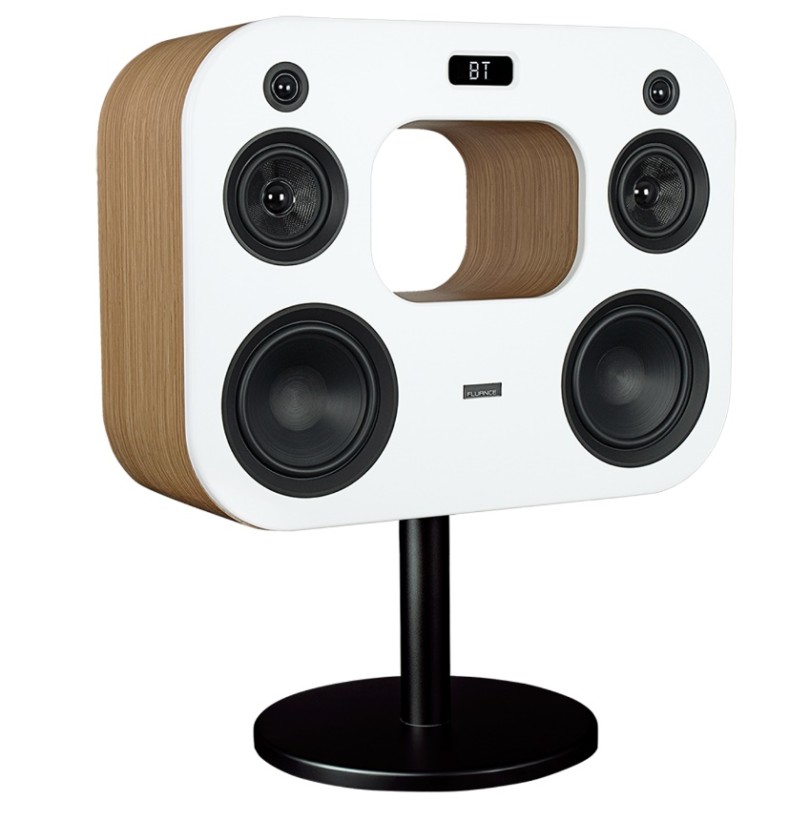 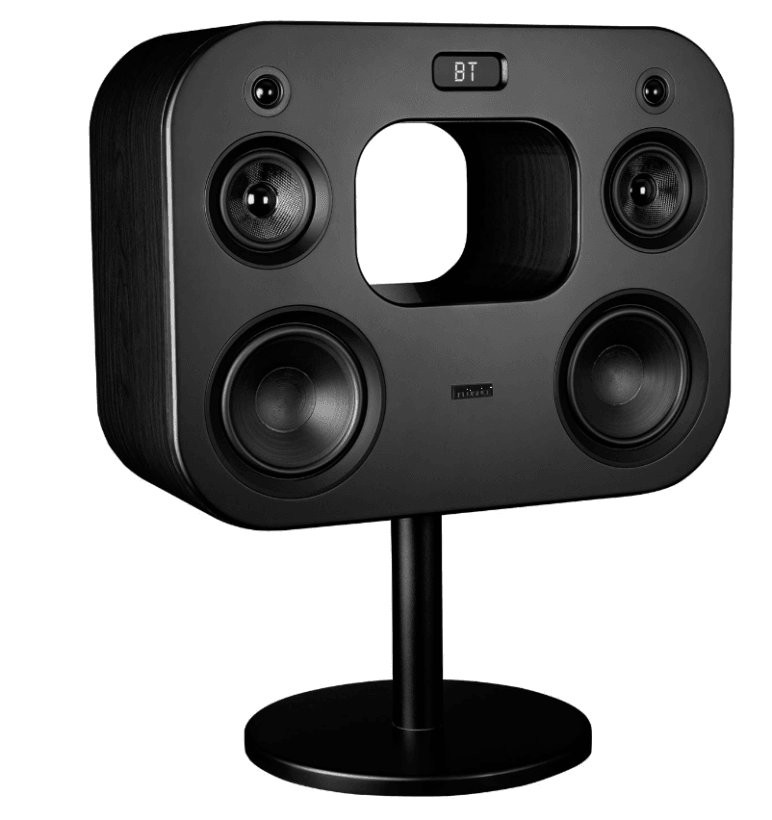 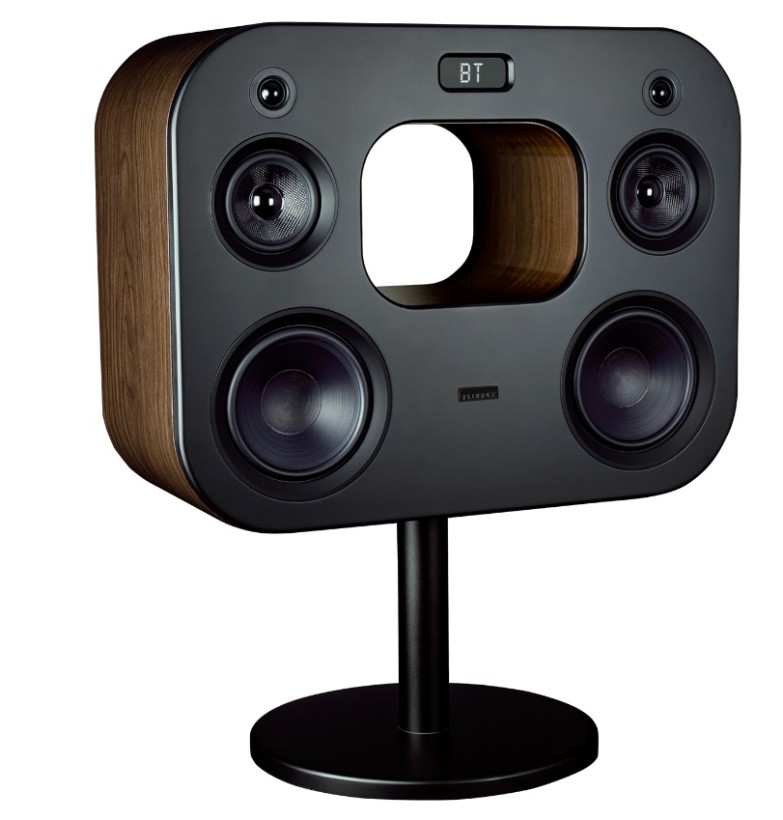 Opening up the package (after like half an hour of catching my breath), I was met with an attractive black speaker, comprised of six drivers in a stereo set up. There’s a big gap in the middle which gives it a bit of character, and serves as a useful storage space for trinkets or decor. The protective filter is magnetically attached – a nice touch – though I prefer the look without it.

Up top you have a few capacitive touch controls, which include basic playback controls, an input selector, and options to enter a settings menu for Bluetooth pairing and tuning sound to your tastes.

With a solid wood cabinet and tasteful design, it’s attractive speaker that could serve as its own statement piece in your house… if you have the space. Unfortunately, I didn’t, so the speaker was largely relegated to a corner of my tiny living room. This isn’t really a speaker for tiny NYC apartments, unless you’re using it as a stand of some sort.

Connectivity wise, the speaker has the aforementioned Bluetooth connectivity, in addition to FM and AUX inputs should you want to connect your phone or other devices. For Bluetooth, it features the AptX codec to make sure your audio is being streamed without being compressed to oblivion

Unfortunately, the lack of a WiFi option means that all your phone’s bleeps and bloops will blast through the speakers. Best to keep your phone on vibrate or silent while connected to these. The other caveat to the Wi-Fi implementation is range. Although decent for Bluetooth – it worked through two walls – it’s not the home-wide range of a Wi-Fi system.

When not interrupted by said bloops and bleeps, they sound wonderful. My main reference nowadays are a stereo pair of Sonos Play:5, each half of which retails for the same $499 price tag (though they can be found for cheaper). The Fluance puts up a good fight.

The speakers get ridiculously loud. I never dared play them at quite their max, but I didn’t hear distortion at any volume. Bass impresses and has little trouble with complex passages, and only starts to roll off at around 35 Hz (it seems to reach a bit deeper if placed on the floor, without the pedestal). Mids were well textured, but slightly recessed. The highs are wonderfully detailed, if a bit soft for my tastes.

Thankfully it’s easy to tune the sound with just a few taps on the remote or top of the unit. I just wish you had more than two control points, as you can only adjust generic ‘bass’ and ‘treble’ settings. The treble adjustment was fine, but I found the bass one to pump up too much of the midbass and not enough of the subbass.

The biggest caveat to their sound is inherent in their design – the soundstage is small. The drivers are simply too close to another for real stereo separation unless you’re sitting dead center and only a few feet away.

Fluance likely figures most people will use these for filling an entire house with sound, in which case stereo wouldn’t matter, but I would’ve even appreciated a little bit of virtualization to widen the sound a bit. Given their size, it’s not hard to imagine someone wanting to use these as their TV speakers via the Aux cable. In fact two of the three reviews on Fluance’s website show that’s exactly how some people are using the Fi70.

Compared to the Sonos, the Fluance is the better sounding speaker dollar for dollar (although audio and price are hardly a linear relationship). The Sonos takes the edge when in a stereo pair – particularly for soundstage and bass extension – but for the price, they should.

Really, the Fi70 shouldn’t be thought of as Bluetooth speakers so much as an all-in-one solution for home audio. Of course, you could just buy yourself some bookshelf speakers, a cheap subwoofer, and a Bluetooth enabled amp setup, but that would involve a myriad of cables and likely more money for this kind of sound quality. And despite the weight, one speaker is still easier to carry and move around within your house than multiple devices all at once.

Bottom line: if you don’t care much about stereo presentation, want an all-in-one sound solution, and are looking for something in the ~$500 price range, the Fi70 are an easy recommendation. Just get someone to help you carry it.

Read next: Creepy uncle Uber is tracking passengers after being dropped off