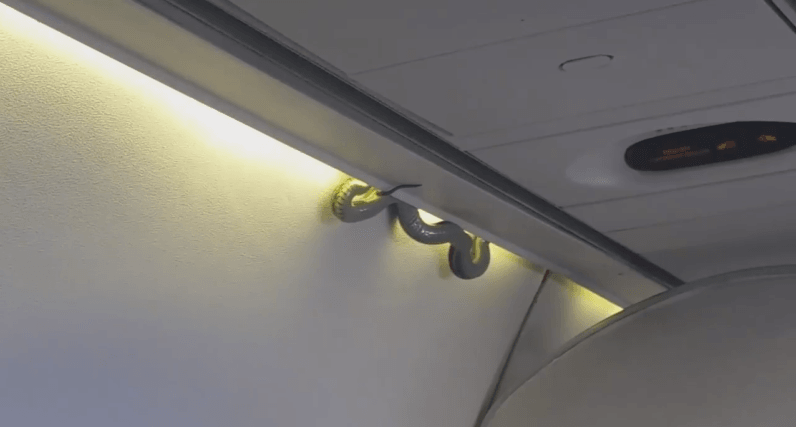 On Saturday, passengers of a commercial flight from Torreon to Mexico City were involved in a real-life action movie when their comfort was suddenly disturbed by an unexpected ‘snake on a plane.’

The story initially picked up momentum when passenger Indalecio Medina shared a video on Twitter showing the serpent as it casually slithered around the luggage cabin.

“I was reading a magazine and the passenger next to me saw it and, ‘Oh my word!'” Medina said. According to his estimates, the snake was over 3 feet (about 1 meter) long.

Passengers were quick to get out of the way of the wriggling animal before it dropped to the floor, where people eventually trapped it with blankets provided by a flight attendant, Medina further remarks.

The incident took place on a flight operated by flag carrier AeroMexico.

Shortly after the green-complexioned reptile was noticed by passengers, the pilots of the plane radioed ahead and were immediately granted permission to conduct a priority landing, ultimately touching down 10 minutes later.

Passengers were swiftly escorted out the plane through the rear exit, giving way to the animal control unit to step in and take the serpent into custody.

AeroMexico consequently issued a statement informing passengers the matter is being investigated, but it remains unclear how the poisonous reptile ended up on board.

In any case, I’m just relieved Samuel L. Jackson wasn’t there to open some windows.

Snake on a plane: Live reptile intrudes on flight in Mexico on AP

Read next: Why are technology adverts so terrible?