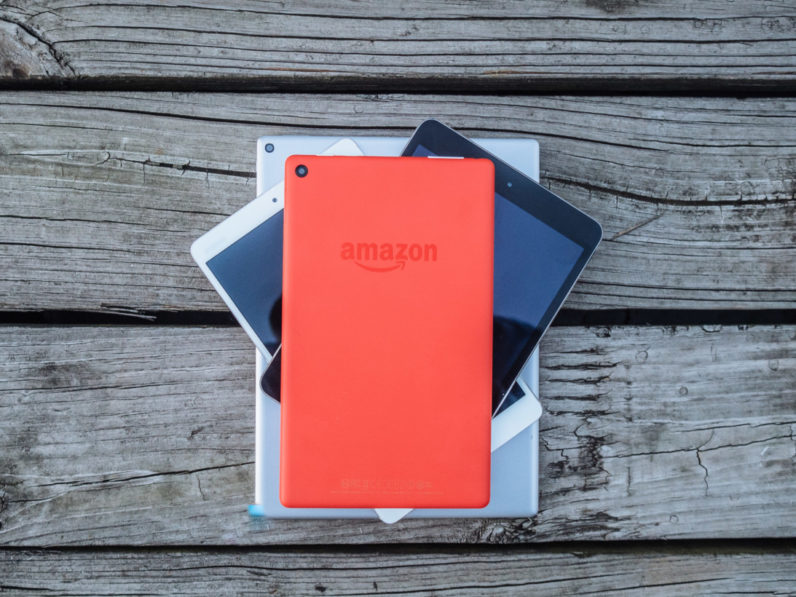 Tablets are the middleman of technology – not as essential as our phones, but not as powerful as our computers. While devices like the Surface Pro and iPad Pro have focused on maximized productivity – and come with price tags to match – chances are most people use their tablets for watching videos and reading books.

Those are precisely the people Amazon is targeting with its new Fire HD 8 tablet at. At $89, it offers a heck of a lot of tablet for a low price.

First off, the specs to keep in mind

Obviously, Amazon isn’t going to win you over with specs. That resolution and ppi might seem super low in our world of Retina displays, but lets remember that the screen is still the same resolution as many people’s television sets at home.

You won’t be confusing eBooks for print, but it’s certainly legible and colors look decent, though the screen is warmer and the colors duller than I like. The HD 8 has good visibility outdoors too, although blacks take on a slightly blueish tinge under bright light. Video is bolstered by a strong set of speakers.

I happened to be testing the HD8 alongside Huawei’s new MediaPad M3, which has one of the best displays and some of the best speakers I’ve heard on a tablet of its size, and it blows the HD 8 out of the water, as your expect given the M3 costs $400.

But when I spent time with HD 8 in isolation, it did make me question how much I really needed a premium tablet. If I hadn’t been coming from high end devices, I’m not sure I would’ve really cared about the slightly fuzzy text and occasional dropped frame.

Moreover, there’s some merit to the lack of premium materials: I don’t feel like I have to baby the plastic HD 8.

Whereas with tablets like the iPad, Pixel C, and Media Pad I always make sure I’m setting the tablets down gingerly so as to not scratch the shiny casing, I didn’t have any such concerns with the HD Amazon says the tablet is 2x more durable than the iPad Mini 4. That’s an extremely vague claim, but yes, it does feel rugged.

Any scratches were hidden by the plastic, and I could just toss it around at home without worrying about whether I’d dent the metal or break the screen. The textured back is nice and grippy too, making the tablet easy to hold in one hand

Of course, you could add a case to the other devices, but that adds to the weight and bulk, somewhat defeating the purpose of a tablet. in the first place.

Battery life was very solid as well. Amazon rates it at 12 hours of battery life, which I found to be true. It could easily last for three days if you’re only using it for short stints at a time, given very low standby drain. I never had to recharge it at the end of the day.

My one true qualm with the HD 8 is Amazon’s continued insistence in limiting its tablets to Amazon’s own app store and content, despite running an Android variant. Google’s Play Store app selection is both much wider and more frequently updated – I couldn’t find many of my favorite apps on Amazon’s marketplace.

I realize Amazon likely subsidizes a portion of the HD 8’s cost by making sure customers sign up for its own platforms, but I can’t help but feel people would buy Amazon tablets in droves if they could reach Google’s full app selection. There are ways to sideload apps and install the Play Store, but it’s a hassle.

Also, both cameras suck. They’re grainy, blurry and the front facing shooter is not nearly wide-angle enough. Just don’t use them unless you absolutely have to.

Those complaints aside, the HD 8 is easy to recommend. The display, speakers, performance, build quality and battery life all hit the ‘good enough’ mark if you don’t need the best specs around (and if you do, you probably wouldn’t be reading this review in the first place).