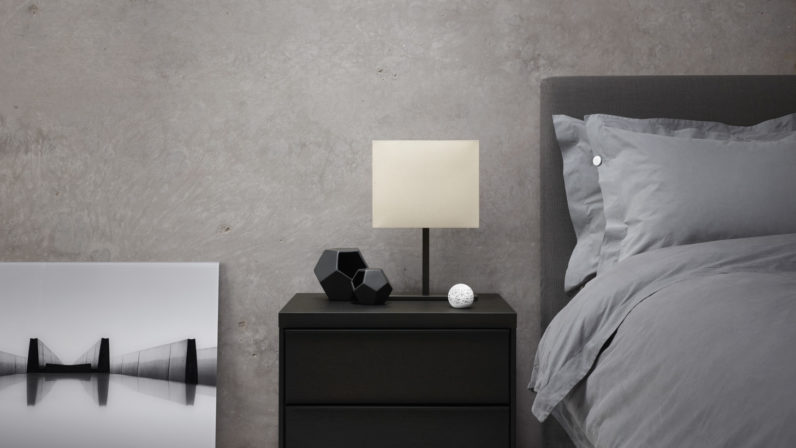 Sense debuted its gorgeous sleep tracker in 2014 with a $2.4 million Kickstarter and a promise: what if you could track your sleep, but not have to wear any annoying devices? It delivered on that, and now it’s back to take it to the next level.

Today, the company is launching Sense with Voice. It looks the same as the previous product, but on the inside of the product it’s changed in almost every way.

Now you’re able to talk to Sense, so you don’t have to interact with it through the app. Instead of tapping around to configure your alarm, you can just say “Okay Sense, set an alarm for 7 am” and it’ll do it.

That’s pretty magical, particularly considering that Amazon’s Echo only hit the market about a year ago, and Google Home is yet to ship. Smart devices you can talk to in the home are in their infancy, but Sense, a 50-person startup has beaten some of the giants to the market.

James Proud, Sense’s CEO and founder, told me that adding this kind of functionality isn’t trivial – you basically need to build the far-field microphone array from scratch, accounting for the shape of your device, then develop all the machine learning and voice recognition to go along with it.

I asked Proud why the company is focusing on voice; who said that it’s “always been on the roadmap” because “there’s actual health utility in getting the phone out of the bedroom.” Even better, Proud said that there are “all these people worrying about how to best create a snooze button, but why can’t you just yell ‘snooze’ and make it happen?”

The appeal of that is obvious, in a world moving to favoring ‘no interface’ on devices, and designing them around making it simpler to use them without pulling out your phone.

I purchased Sense’s first generation product on Kickstarter and it’s a delightful product. The company’s industrial design is lovely, and my favorite thing about it is that it’s a sleep tracker you don’t have to actually do anything with. Why do you have to set your phone to track, or wear a device, when it should be able to just happen?

Sense with Voice also connects up to the home – at launch it can control a Nest thermostat and Philips Hue lights, but other integrations are planned long term. Proud says the company doesn’t want to get into voice assistants, but the integrations are because “everything starts with sleep.”

That said, the integration is a way to make your ‘smart’ home even better. Sense can be configured to help wake you up in the morning with Hue by gently fading in, or with Nest by warming up your room.

The integrations are an interesting addition, for a company that makes a sleep tracker, but according to Proud it’s only natural. “Sleep is the number one thing that’s important – if we care about someone’s day, we have to start with the night.”

He says that if you know when someone’s awake and asleep – properly, rather than just guessing – then you can use that as a signal for the smart home that’s far more powerful than just on/off switches or talking to Siri.

On top of voice, Sense’s updated hardware is packed with new sensors. In the past it could track air quality and light, but now it’s broken those sensors down even further with UV light, carbon dioxide (CO2), volatile organic compounds (VOCs), light temperature, and barometric pressure – all in the pursuit of better educating you about your sleep.

I’m a big fan of the first generation Sense, and have constantly recommended it to friends, so I’ll be upgrading to the new device.

The idea of just being able to speak alarms is lovely, and not having to rely on my phone for that is even better – but my favorite of all is that Sense is one of the few devices in my home that works with little interaction, or me needing to wear something, and that’s refreshing.

Sense with Voice will be available for $149 USD from Hello’s website directly, Amazon.com or at Target and Best Buy.