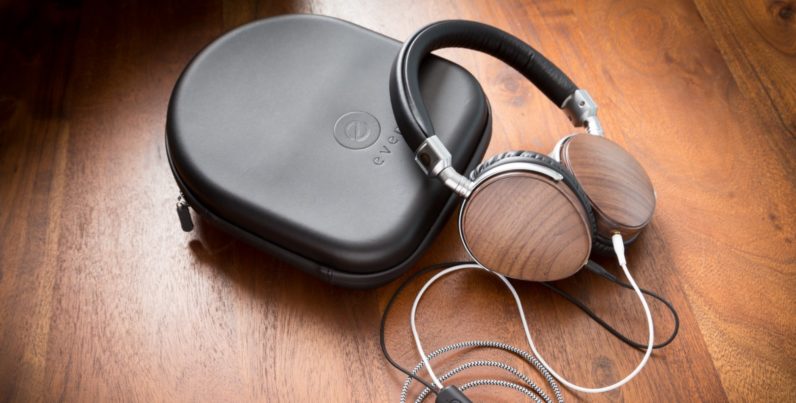 Get ready for the next audio trend: ‘EarPrint’ headphones that essentially work as glasses for your ears.

Even, a newish company that recently made waves with its original set of $99 in-ear monitors, is today introducing its second product, the full-size $179 H1. I’ve had the chance to try them out for a couple of weeks, and the concept behind them is simple, but clever.

Everybody’s ears are different; your own two ears may have slightly different hearing ability. Even tries to sidestep this issue to bring an idealized sound tuned exactly to your ears.

The microphone and control nugget on the removable cables doubles as a digital signal processor of sorts. Double tap on the even logo, and you’ll be greeted by a voice guide telling you how to go through the set up process. It’s similar to those hearing tests you got as a kid at school; you listen to eight for short pieces of music in each ear that gradually increase in volume, and tap the even button when you begin to hear the music. The headphone then judges which frequencies are under or over-represented in your hearing, and adjusts accordingly.

It sounds gimmicky, but works quite well. The setup takes about 2 minutes, and then you can forget about it. In my case, Even gave a boost to the sub-bass region and tiny boost to the treble. That took me a bit aback, because it’s basically exactly how I would have normally EQ’d the headphones myself. It’s also worth noting that I tried the test several times, and except for one outlier where the left ear seemed much louder than the right, the headphones seemed tuned exactly the same way every instance.

It’s is also not the only product to do this – the HTC 10 has a very similar tuning system that works with any of your headphones – but Even handles the changes better than the couple of other products I’ve tried.

Mainly, it isn’t overbearing with its changes. At least in my case, the difference was fairly subtle; it didn’t feel like the headphones were trying to overcompensate for anything.

That’s because the headphones are actually quite good as straight-up headphones, even with the EarPrint mode turned off. Despite their small size – the earcups fit snugly around my fairly small ears – they feature 50mm Byrellium drivers; one of the largest size available for dynamic drivers, and a good 10-20mm larger than the average consumer headphones.

By default, the sound is slightly on the fun side of neutral, with just a slight U-shape (slight bass and treble bumps). There’s a ton of detail, and the soundstage is impressively wide for closed-back headphones – almost as wide as some open back cans. I’ll need more time with them to be sure, but I’d say they’re better than average for headphones in their price range, even without the fancy tuning features.

Comparing the tuned sound back and forth (you can switch between modes with a simple tap of the ‘E’ button), I almost always preferred the EarPrint version, but there were times the regular setting sounded better, mainly because the tuned version seemed to close the soundstage and limit the sense of space very slightly, perhaps because of the additional bass presence.

It was noticeable on some classical music tracks, where some instruments seemed to lose their clarity and separation. But for the most part, it sounded definitely better; listening to Bach’s Toccata and Fugue and getting that extra bit of sub-bass rumble from the church organ is definitely something I appreciate. Of course, your mileage may vary.

The headphones themselves are quite nice too. They are surprisingly lightweight, with a comfortable headband, and stylish-looking wood-and-metal aesthetic.

There are a few issues. First is the presumption that there is an idealized sound; maybe some people likely a huge mid-bass hump and grating treble. Isolation is average to poor for a closed back headphone. But by far my biggest qualm is that the headphones need to be charged to listen to music – I can’t think of any logical reason why Even wouldn’t just let you listen to music after the headphones die without the EarPrint technology, especially as they already sound quite good on their own.

But if you can live with the irony of having to charge wired headphones – and want to realize just how bad your hearing actually is – Even’s headphones are definitely worth a look.

Even H1 on Even

Read next: 4Chan's Operation Hotpockets is trying to get Julian Assange back online