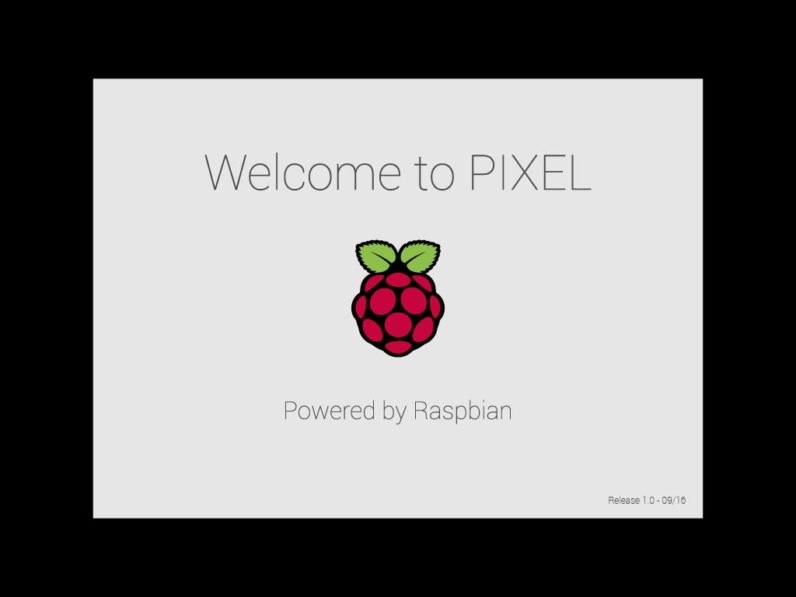 Raspbian is one of the more popular linux distros for the Raspberry Pi. It’s easy to use, and works well on the humble Pi’s austere hardware. But Raspbian’s achilles heel is in the looks department. Put simply, it’s hideous.

Pixel (an acronym for Pi Improved Xwindows Environment, Lightweight) might just change that. This ambitious project from Simon Long aims to re-imagine the Raspbian desktop to make it more visually tolerable and easier to use. So, what’s different?

Perhaps the biggest change is found during boot-up. Pixel removes most (but not all) of the cryptic diagnostic messages, and replaces them with a gorgeous splash screen.

While this sounds like a minor change, I imagine those who are new to the intimidating world of Linux would welcome it.

Raspbian now ships with a choice of sixteen gorgeous background images. Better yet, these are present when you try log in to your system.

It’s also worth mentioning that Pixel radically updates the default icons. The old (and ugly) Raspbian ones been replaced with brand new art.

These were created by Raspberry Pi Foundation designers Sam Alder and Alex Carter. According to Long, these have a design ethos that emphasizes professionalism, yet has a touch of playfulness.

Pixel makes a number of other smaller, yet significant tweaks.

It’s now clearer if your machine is overheating or undervoltage. It now uses the Infinality font package, and Application window frames have a flatter, curved look. It’s now easier to turn off the built-in Bluetooth and Wi-Fi radios simultaneous, making a kind-of “airplane mode”. It’s also easier to leave wireless networks that you have already connected to.

Finally, Pixel bundles new apps including RealVNC, SenseHAT, and packs an initial release of Chromium for Pi. This takes advantage of the Pi’s native hardware acceleration, and has the potential to offer an almost passable browsing experience.

Pixel will ship as the default windowing environment on Raspbian going forward. If you want to upgrade an existing Raspbian install, there’s instructions on the Raspberry Pi website.

Read next: Google's Search app for iOS now has an Incognito mode