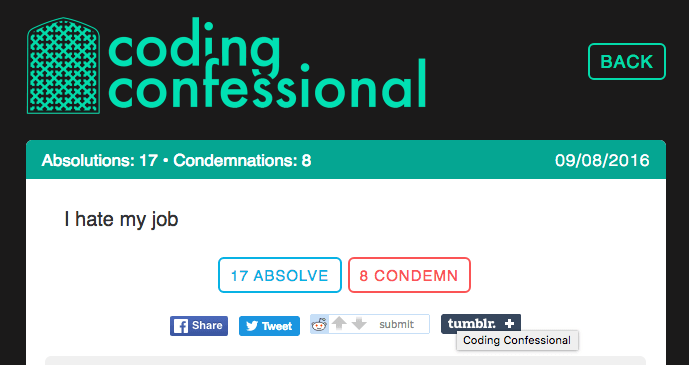 Software development jobs can be awesome. I’ve interned at startups where the environment is relaxed, and I worked on projects that excited me with cutting-edge technologies. Then there are the jobs that are, frankly, soul-suckingly horrible. There’s very seldom any middle ground.

I must confess, I get a perverse sense of pleasure from reading horror stories about the latter. The Daily WTF has pride of place in my RSS reader, and I subscribe to the Programming Horror subreddit. Now, there’s another place for me to get my schadenfreude on: Coding Confessional.

As the name suggests, Coding Confessional is a place where devs can anonymously vent their spleens about their workplaces, their colleagues, and the projects they’re working on.

Some are confessions about improprieties, with one guy saying that he intentionally writes insecure code, so that “if anything bad happens it’s the company that is going to take the fall.”

Other posts bellyache about the ennui of working as a developer. One anonymous poster says that despite still loving programming, he hates working as a programmer, while another merely says “I hate my job.”

Other users on the site can choose to absolve (upvote) the poster, or to condemn (downvote) them. If you have your own confessions to share, you can do so here.