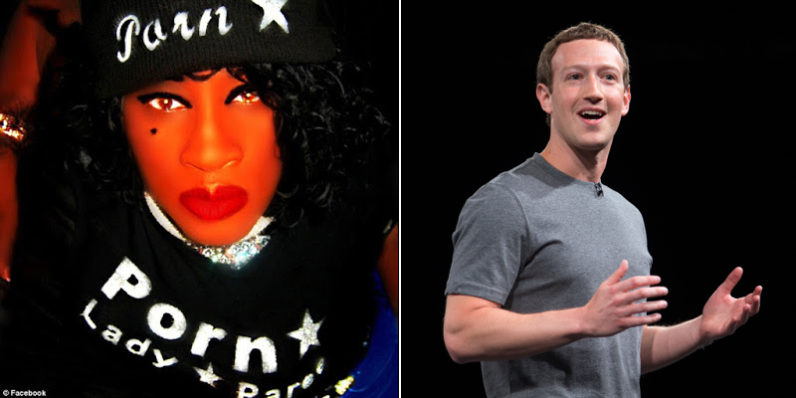 After receiving death threats on the platform and trying fruitlessly to stop the rumor mill, Paree is seeking $1 billion in federal court, accusing the social media site and its CEO of libel and intentional infliction of emotional distress.

Paree has a history of this sort of behavior. In 2009 she sued Leisure Time Entertainment and producer Mark Carriere in Indiana court. The suit alleged the adult entertainment group and producer issued false and defamatory statements claiming she was born with both male and female body parts.

She was awarded $2.5 million in compensatory damages and $50,000 in punitive damages.

In the current lawsuit, Paree claims the defamatory comments being spread on Facebook have led to assault by fans, and that she’s now at risk for violent interactions. At one point, she claims, a fan slashed her with a knife, slicing her face from the temple to chin on the left side while declaring his intent to harm her because she used to be a man.

If true, the situation is indeed unfortunate. It’s not, however, libel or intentional infliction of emotional distress. Facebook is a platform; its users are something else entirely. While reporting this type of behavior often leads to Facebook banning or suspending accounts, it’s unlikely to stop it.

The belief that Zuckerberg or Facebook is to blame for a bunch of idiots on the internet is nothing short of idiotic.

There’s also the issue of $1 billion dollars. The amount itself makes the lawsuit look like a cash grab from an unemployed (former) adult entertainment professional. Paree’s lawyers disagree:

Such intentional, malicious, or grossly negligent publication by defendants has caused her economic and compensatory damages, as well as emotional distress and physical pain so severe that she has had to seek professional assistance to cope with the damages caused by Facebook and Mark Zuckerberg

There’s no doubt that rumors of this nature can limit career prospects, especially for someone in adult entertainment industry. It’s also unfortunate we still have to deal with hate speech and often vicious, misguided, defamatory statements on social media. The truth of the matter is, you can’t stop people from talking and social media is now where they hold their conversations.

It’s akin to blaming the water cooler for things people say around it. We wish Paree the best, but until she can prove that Zuckerberg and Facebook were posting these comments on their own, or willfully ignoring reports of hate speech, this lawsuit seems dead in the water.

We’ve reached out to Paree’s attorney and Facebook. We’ll update if necessary.

Read next: Report: Alphabet is asking Google to scale back its aggressive Fiber rollout