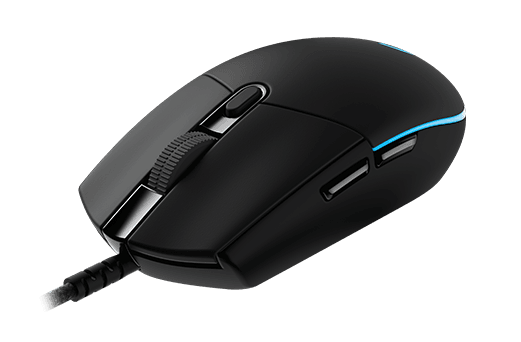 Logitech has a new high-end gaming mouse. While you’d be forgiven for thinking it’s an entry-level device given the company produces eccentric products like the MX Master, a closer look shows it’s pretty much tailor-made for top-tier FPS gamers.

The fittingly named G Pro is all about maximizing performance at its $70 price point. It has Logitech’s very best optical chip, the Pixart PMW 3366, which is almost universally acknowledged as the best gaming sensor there is (aside from maybe the Avago s3989 in Razer’s DeathAdder Chroma).

The mouse is extremely light at 85 grams, which is generally preferable for playing at low sensitivities in games like Counter-Strike: Global Offensive. The usual thinking goes that lower weight makes it easier to stop the mouse on a dime without momentum carrying you past that crucial headshot.

It keeps other features simple with ‘just’ six programmable buttons and RGB lighting, and that’s probably how most serious gamers would prefer it. I’m personally fond of a little more weight, buttons, and an asymmetrical shape for use outside of games, but then, I’m not trying to be a pro.

Now, if you care about these things in the first place, you might be thinking this sounds just like on of Logitech’s other mice, the G303. And you’d be right; the specs are nearly identical. But gamers are a finnicky bunch.

The G303 suffers from varying degrees of sensor rattle, which we’d imagine Logitech fixed here. More importantly, though praised for its performance, the G303’s small angular shape was fairly divisive (read: uncomfortable). If you can’t get along with the ergonomics, all the performance in the world doesn’t matter.

The G Pro instead offers a safer, curvier shape that will likely sit well with more gamers and grip styles, and which is more akin to mice from smaller, gaming oriented brands like Zowie’s FK2, or even Logitech’s old G100, which this takes inspiration from. The scroll wheel looks thicker and grippier too.

Getting it right with the pros is particularly important now that the sensor inside the Logitech’s best mice is being made available to other manufacturers (a variant called the 3360), like in the $50 Nixeus Revel, which I’m currently in the process of reviewing – and which is excellent.

People like using what the pros use, so in the end, it comes back to the name. The G303 is probably Logitech’s most popular mouse among pros, and yet it sits near the very bottom of its current lineup and naming conventions.

By abandoning the number system with the G Pro, Logitech is subtly admitting that its best mice don’t always have to be its most fancy and most expensive – they simply need to get you the most headshots.

You can pre-order the G Pro from Logitech now; it will start shipping later this month.