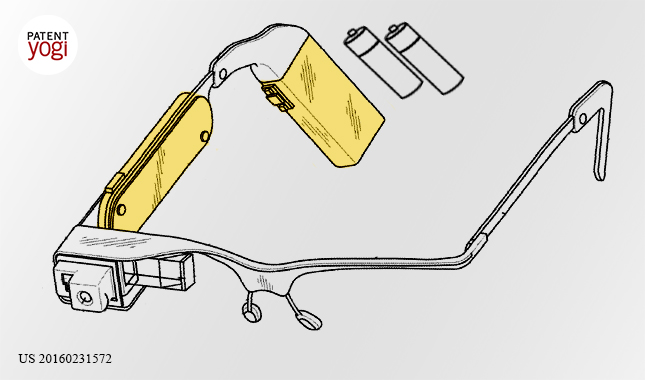 This week, the US patent office issued 6,798 patents. Each patent adds a little something new to the human knowledge base.

As we can’t list all six thousand, the PatentYogi team has selected the five most interesting patents.

Therefore, a smaller engine can be installed to the aircraft itself, which saves fuel, improves efficiency and range, and reduces noise pollution considerably.

The overall design of the device is largely similar to spectacles that people wear to correct vision related problems.

The patent reveals that Google Glass will include a big touchpad on one of the arms of the device. The touchpad is installed on a touchpad housing that contains electronic circuitry and a power source.

Further, the device includes a big earpiece housing positioned behind or over the ear of the user while being worn. Earpiece housing contacts a portion of the user’s head to help secure the position of device.

The two housings (touchpad housing and earpiece housing) include memory, a microprocessor, communications devices, such as cellular, short-range wireless (e.g. Bluetooth), or Wi-Fi circuitry for connection to a remote device.

Further, the earpiece housing includes a battery or multiple batteries of various forms, such as AAA, AA, or 9-volt style batteries. These batteries can be quickly replaced and recharged separately.

However, the battery can also be a rechargeable battery such as a lithium-ion or nickel-cadmium battery.

Therefore, a majority of the weight is carried by the ear of the user, but some weight can still be carried by the nose in order to give the device a secure feel and to keep the bridge anchored on the nose.

Currently, however, the ability of end users, applications, climate researchers, or members of the public to gain meaningful access to climate data analytic services is limited. The current technologies are deficient because there exists no effective means for gaining access to the libraries, utilities, and documentation that include an application programming interface. There is a need to provide easier access to the capabilities of a climate data analytic services application programming interface.

Researchers, news organization and public in general may use this service to research and find solutions to problems like Global Warming.

Google gets inspired by the movie ‘Flubber’

Telepresence systems allow users located remotely to interact with each other – making them feel as if they are present, at the same location as that of the other user.

Current telepresence solutions, such as commercial video teleconferencing systems, provide multiple users with the ability to interface electronically, using both audio and video feeds. However, this typically involves each of the users being present in an established teleconferencing facility at a fixed location.

One solution is use to telepresence robot that may be navigated by a remote user, for example, through corridors, into and out of offices, conference rooms and other work spaces, and the like. Ed Snowden used such a robot to deliver a TED talk in US while in exile in Russia.

However, the size and energy consumption levels of this type of telepresence robot hinder its ability to effectively navigate complicated spaces with limited open floor space for the robot to traverse. Additionally, this type of telepresence robot cannot traverse stairs, and would require on-site human intervention to access a work space on a different floor using an elevator.

The screen orientation is maintained, as the drone flies around. When not in use, the screen can be folded into a position along the base of the drone.

Further, the screen may be replaced with a tablet computer. Alternatively, a smartphone installed on the drone, may project images on the screen.

The patented drone with screen looks similar to “Weebo” from the movie flubber.

Most cameras capture what we can see. But infrared cameras can detect and capture invisible infrared rays that we can experience as heat but can’t see.

Heat is emitted by all objects above absolute zero and the amount of radiation emitted by an object increases with temperature. Thermal imaging allows one to see variations in temperature across a particular object or body. When viewed through a thermal imaging camera, warmer objects are generally distinguishable from cooler backgrounds.

However, LWIR imaging has one big disadvantage – it lacks contrast with respect to background objects and noise. Therefore, images of people tend to look washed out and ghostlike, and it is difficult to obtain information from the images, which would allow reliable and repeatable identification of a person’s characterizing facial or other features.

Now, the US Army has invented and patented LWIR imaging techniques to enhance identifiability of captured objects.

Certain portions of the subject’s face are much easier to recognize in the improved image when compared to the conventional images, i.e., eye-brows, eye-lashes, teeth, wrinkles in the forehead, etc. Finally, the image can be mapped onto the three-dimensional surface representation to provide a better view of the object being captured by camera.

Read next: How IoT companies can beef up their data security