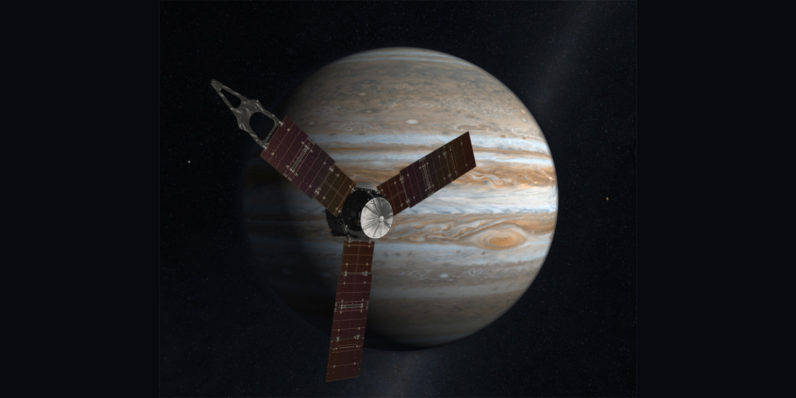 Nearly five years after it was first launched in August 2011, NASA’s Juno spaceship has finally entered Jupiter’s orbit. At 11:53PM ET/8:53PM PT, the space agency received confirmation that the spacecraft had turned on its main engine, which burned for 35 minutes to slow down and allow Juno to be drawn in by Jupiter’s gravitational pull.

Engine burn complete and orbit obtained. I’m ready to unlock all your secrets, #Jupiter. Deal with it.

It’s a monumental achievement for NASA: the feat saw Juno cover 445 million miles in space to get closer to Jupiter than any other spaceship in the history of mankind. It is now in a highly elliptical 53-day orbit around the giant planet.

Jupiter emits massive amounts of radiation and flings debris with great force; Juno will avoid these belts for most of its time in the planet’s orbit. But at the end of the 53-day cycle, it will be within close proximity of the planet’s equator – close enough to study the atmosphere and magnetic field.

At 12:30AM ET, the spaceship is scheduled to re-orient itself toward the sun to recharge its batteries. If the maneuver is successful, it’s in the clear. You can follow along by tuning into the livestream above.

Read next: Every country needs to follow Bulgaria's lead in choosing open source software for governance