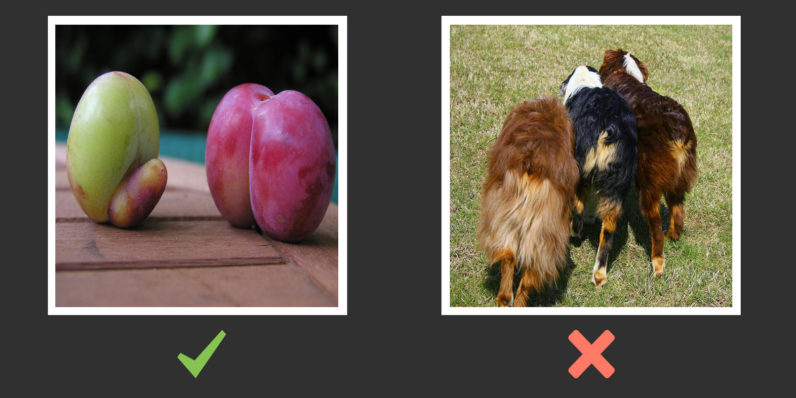 Last week at Twitch, there was a bit of debate after the removal of certain butt emotes. This led to Twitch further clarifying positions on its new standards for emote approval, a process that led to comedic gold as some unlucky schlub had to describe, in detail, what makes one form of a butt (poop, orgasm, etc.) emote okay, but not another.

Butts and “booty” have taken on a silly but friendly cultural meaning outside of being overtly sexual, much like Kreygasm. However, not all butts (or ‘gasm emotes for that matter) are ok. We rejected all butts to reset the baseline and clear up confusion going forward. Here is how we will review butts (you can re-submit a recently rejected emote if it meets these standards):

Yes: Drawn depictions of clothed human butts are generally ok. The same goes for drawn animal butt depictions. “Fruit butts” are ok if the image is obviously a fruit. Here’s a couple of ‘Yes’ samples from our own GeersArt. The words “butt” and “booty” are generally ok in proper context.

No: Nude human butts depictions, anuses (we’re well aware of what a butt is without the anus), or pictures of an actual human or animal butt. This also includes those butt depictions that could be confused with a nude human butt.

So, some butts are okay, some aren’t. I’m glad we worked that out, Twitch.

Now, on to “breasts, genitalia, crotch bulges, bikinis, underwear, and overt sexual innuendo” — all are a firm “no” according to Twitch.

Cute poop emojis are ok thanks to smartphones. The act of defecation however is not. No defecating and no “shit/shit on” or similar references/depictions.

And, it feels weird asking but… orgasms?

Kreygasm is a legendary emote on Twitch. Similar to Homer Simpson salivating over donuts, this “O face” has become the emoticon for those things we desire the most. We accept face/head only ‘gasm depictions, with a preference toward the broadcaster’s own face.

To the Twitch employee responsible for clarifying these points… we’re sorry.

Read next: Report: HTC Nexus specs revealed (most of them, anyway)