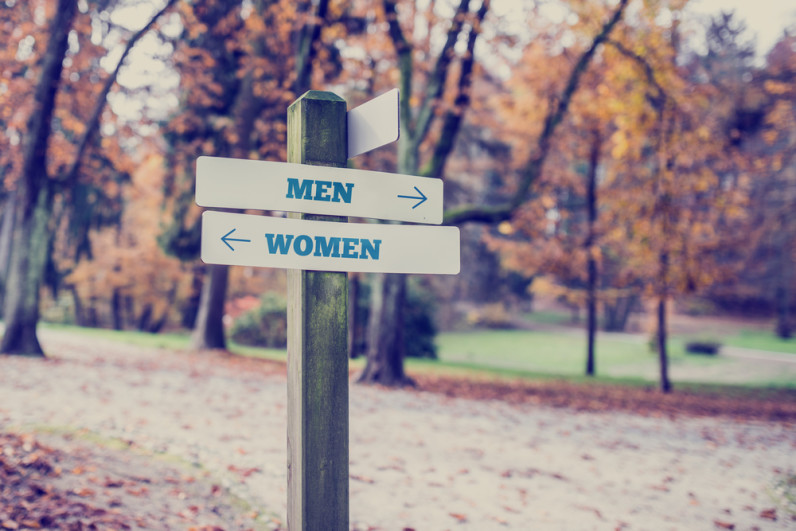 For a long time, almost as long as I’ve been a member of the exclusive “Women in Tech” club, I’ve avoided talking about diversity.

I modeled myself after Marissa Mayer, who when asked what it was like being the only female engineer at Google (back in the day) said,  “I didn’t notice.”

I completely believe this. It’s often very useful not to notice.

For me, I trained myself not to notice being the only woman in the Slack channel because noticing hurt me. It literally made me worse at my job.

There’s a famous study of black and white participants asked to take a test.

Black and white students performed equally well when the test wasn’t framed as measuring intellectual ability. But when black students were aware their intellect was being judged, they did significantly worse — just because they were asked about race.

Stereotype threat, an established psychological phenomenon, caused black students to do worse on the test.

Identifying themselves with a group that has stereotypical, though mistaken, associations of lower intellectual ability primed them subconsciously to adopt that trait.

When people are aware of a negative stereotype about their group, they often worry that they might confirm the stereotype, and this can have the effect of undermining their performance.

This image, from the presentation “Understanding Stereotypes for Cognitive Design,” explains how stereotype threat works:

As a woman developer, this same thing happens to me when I mentally check the female box and then proceed to be “in tech.”

Identifying myself with a group stereotyped to be worse on average at technical tasks primes me to do worse when faced with a technical task. This can quickly lead to imposter syndrome and worse.

The way around this for me was to downplay being a woman, and this meant not talking about diversity.

Why talking about diversity is hard

I feel that diversity is morally the right thing to do. And for those who prefer a profit motive, it also makes business sense.

But talking about diversity is often hard for the “diverse ones.” In this example alone, we’ve seen that it can prime members of underrepresented groups us to identify with harmful stereotypes—and potentially even inadvertently confirm them.

It’s probably also hard for the “non-diverse ones” — I imagine  it could feel threatening to have a “not diverse” mark next to your name. Developers who are white and men are no less valuable because of their race and gender.

Even that last paragraph makes me uncomfortable, with its binary “diverse” and “not-diverse,” as if we’re facing each other down across a battlefield, brandishing pitchforks.

Don’t let’s stop this conversation. It needs to happen, and it probably will, regardless of who likes it.

What if we re-labelled it, and instead talked about belonging? In my mind, that’s the real issue: some folks feel that they don’t belong in tech. I don’t want to “Be Diverse,” I just want to be.

What if we talked about ‘belonging’ instead?

I want to feel I really belong among my developer peers. Equally, I want my peers to feel that they belong, too (whoever they are).

By talking about belonging, maybe we can refocus the conversation away from quotas and [insert noun here]-blindness, and discuss why it is that many groups don’t feel that they can belong in our industry (and perhaps many people don’t feel they can truly be their whole selves) and what we can do to change that and make everyone feel really welcome.

This quote, from Maxine Williams, global director of diversity at Facebook, sums up my feeling of fostering belonging beautifully:

Every Monday, when we get a new class of hires, I say to them, “I don’t want you to come in here and think that you need to use ‘blind’ as a suffix. That you need to describe people as ‘just my colleagues’ or say things like, ‘I don’t see race. I don’t see gender. I’m colorblind. Sexual-orientation blind.’

In doing so, you’re neutralizing a part of a person that is an asset. I want you to see those characteristics and see them as adding value.”

Read next: Facebook's interactive map is the best way to discover live videos streaming in real-time