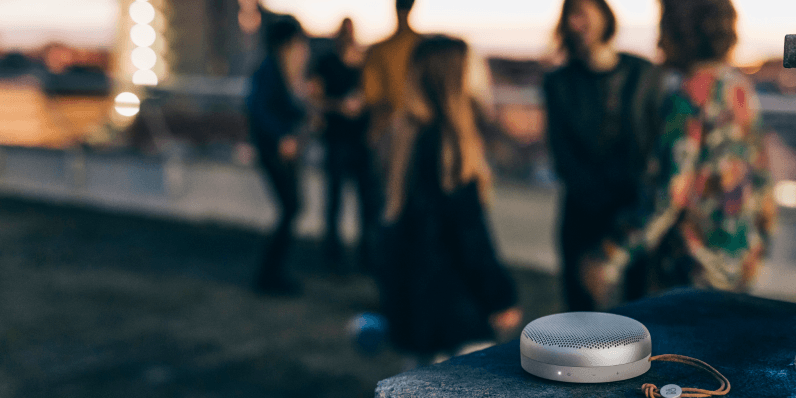 Bang & Olufson is a long-standing audiovisual brand with a reputation for quality – and high price tags. B&O Play is its funkier, cheaper, more accessible brand that draws on that heritage, but puts it within the reach of people who just can’t afford (or justify) spending thousands of pounds on a TV or stereo system.

Today, the company is launching its smallest product to date: the Beoplay A1 Bluetooth portable speaker, which costs $249 (£199 in the UK).

The speaker takes a circular shape and unlike cheaper alternatives, has a reassuring weight when you pick it up. Officially it weighs 600 grams, which just about keeps it within acceptable realms of something you might throw in your bag regularly to take with you on your travels.

That’s exactly the sort of use the BeoPlay A1 has been designed for, although it doesn’t have an official IP rating, so don’t go thinking it’s a full-on rugged Bluetooth speaker, or taking it in the shower.

The unit itself measures up at 133mm x 48mm deep, again, making it easily transportable. There’s also a little strap to hang the speaker somewhere convenient, which I’ve ended up using far more often than I thought I might.

Around the edge of the device, there’ a power button and volume controls, as well as a button for pairing via aptX Bluetooth. The pairing was literally no effort, though there’s no NFC tech here for one-tap pairing. It’s an omission I can certainly live with.

There’s also a line-out, if you want to connect the old-school way, and a USB-C port for charging.

The battery is a 2,200mAh pack with a claimed life of 24 hours. As it’s a small portable speaker that you’re not likely to use for days on end, that sort of battery life is more than enough for me. It takes around two and a half hours to charge from flat to full, and I haven’t had to charge it since I started using it about a week ago.

Obviously, exactly how long it lasts depends on how loud you have it. Crank it up to full and leave it playing and it won’t last as long.

B&O says that the A1 uses a “unique dedicated DSP algorithm with advanced high slope filtering” to create a 360-degree soundscape that eliminates preferential listening positions. It also has a newly-developed aluminium cone mid-woofer and can play back bass ranges as low as 40Hz.

While this is all impressive sounding on paper, it’s even more so in person. The speaker punches well above its size or weight would suggest.

The audio quality tends towards being clear, if a little bass-heavy for some. This will suit a lot of people and mildly annoy a few more. You can tweak that balance through the B&O Play app, but it’s only available on iOS for now. As an Android user, I therefore couldn’t test playing around with the equalizer to change the output.

The app also allows you to control pairing of two of the A1 speakers, to create a highly-portable stereo system or to use each for dedicated playback of each channel. While I only have one unit to test, a brief demo with two confirms that, yes, it’ll probably be loud enough to annoy your neighbours, if that’s your aim.

There’s no option to connect more than two of the speakers together though, so it’s not intended as a challenger to the dedicated multi-room companies, like Sonos.

B&O has also included some patented microphone technology on the base of the unit, with a chamfered edge around the bottom to funnel your voice towards the mic to be heard accurately when using it to answer phone calls.

It is, and it isn’t. It all depends what you’re considering the A1 as.

If you want a couple of them for an ad-hoc multi-room system and you doubt you’ll ever really take them outside with you, then a dedicated multi-room system makes more sense, and ultimately can deliver the same sort of level of audio (or better) for around the same price – something like the Sonos Play 1 feels comparable.

However, where Sonos (and other similar) speakers trip up is that they require constant mains power – that means they’re pretty much useless if you want to take them around with you or even put one in the bathroom.

The A1 is ideal for that latter task – it’s not IP-rated, but the company does say it’s splash and dust-proof to some degree. You’d probably not want to permanently leave it in a steamy room, however.

There’s no way of saying that £199 for a portable speaker is cheap – you can get a whole load of ‘cheap and cheerful’ options for a lot less cash. Those don’t bring the same sort of sense of style and reassuring weight, however.

Nor can they come anywhere close to competing on sound, which is really what the A1’s all about.

If your budget for a portable Bluetooth speaker is around the £200 mark and you want one with incredible battery life and the option of extensibility by adding another into the mix, then the A1 is well worth checking out for yourself.

Beoplay A1 on Beoplay