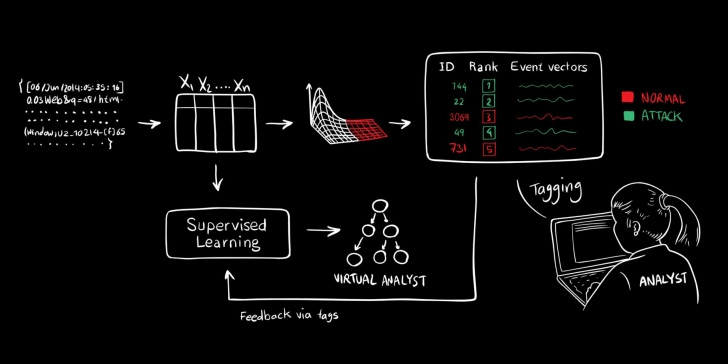 The world has seen numerous major cyber attacks in the past couple of years, with targets ranging from government agencies to health insurers to entertainment companies.

A group of scientists at MIT’s Computer Science and Artificial Intelligence Lab (CSAIL) are working to create a line of defense against these threats to privacy and security. They’ve developed an AI that can detect attacks on networks as they happen, 85 percent of the time.

AI2, short for Artificial Intelligence Squared, looks at data to detect suspicious activity. It does so by clustering the data into meaningful patterns and then presents its findings to human analysts who identify which events are actual attacks. AI2 then takes that feedback on board to inform its next investigation.

The team behind AI2, which is led by CSAIL research scientist Kalyan Veeramachaneni and Ignacio Arnaldo, a chief data scientist at machine learning startup PatternEx, demonstrated that the system is roughly three times better than previous benchmarks and reduces the number of false positives by a factor of 5. And the more data it analyzes, the more accurate it becomes.

In addition, the group says that AI2 can scale to billions of log lines per day to protect large networks.

They presented a paper about the system last week at the IEEE International Conference on Big Data Security in New York City. It’ll be interesting to see how this technology is implemented into large-scale security programs in the near future.

Read next: BlackBerry is okay with helping governments spy on its users - sometimes