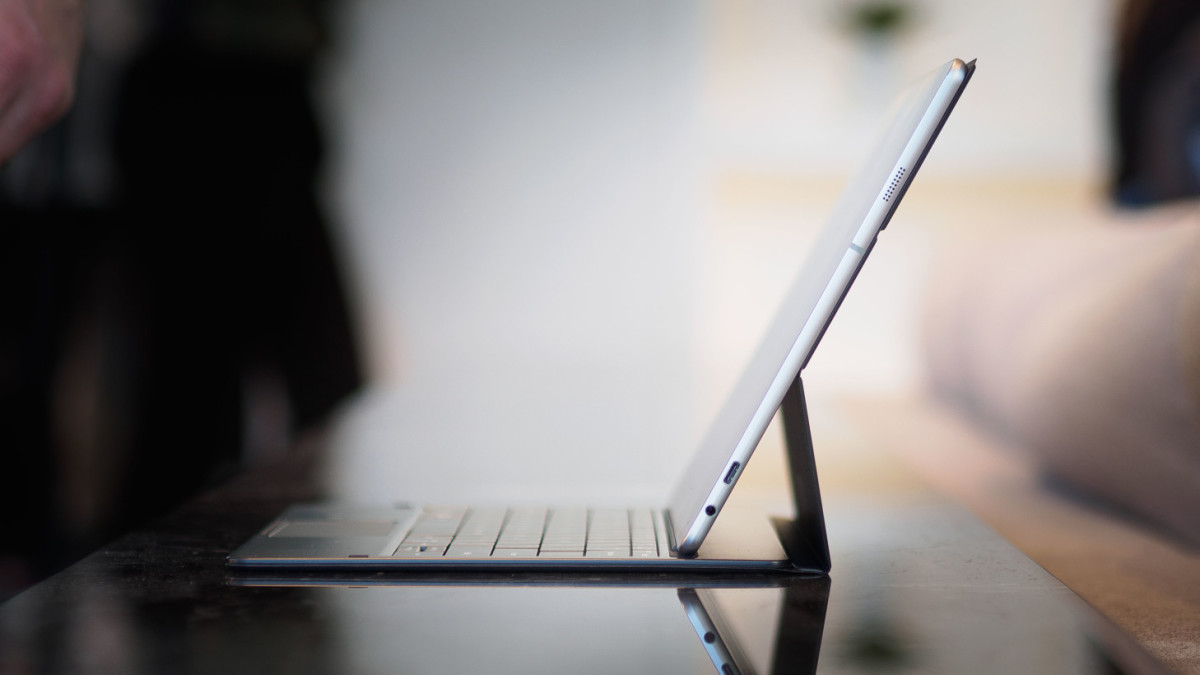 Samsung today revealed a price and date for its Surface and iPad Pro lookalike, the Galaxy TabPro S, in preparation for its release tomorrow. We know the specs, and at $899 – keyboard case included – it seems like a nifty deal. But what about actually using it?

The Galaxy TabPro S is a good looking tablet. It borrows heavily from Samsung’s design philosophy since the Galaxy S6, particularly in its rounded metal frame around the edges, uninterrupted by slots other than the headphone jack and USB-C 3.1 port.

The only design knock is that the back isn’t glass like on Samsung’s phones – which seems a little dangerous at this size anyway – but is instead uses a matte black or white plastic.

The display might be the most eye-catching part of the tablet. The highlight is its Super AMOLED technology, resulting in much better blacks and more saturated colors than what standard LCD panels can muster. While its 2160 x 1440 resolution isn’t terribly high by today’s standards, it’s still sharp enough for everyone but designers and photographers at its size, and just a little under Apple’s ‘Retina’ standard for its 13-inch laptop.

We’re used to OLED displays on smartphones, but the TabPro S is one of very few PCs to include an OLED panel, soit was a little jarring to compare it to the excellent display on the Surface Book. While the colors are more accurate and the resulution sharper on the latter, one can’t help but be enamored by the contrast ratio of AMOLED.

That said, the Pentile subpixel structure means that you can notice some faint coloration green and purple coloration around text and lines if you look really closely. While phones have gotten around this by simply making displays ridiculously sharp, its more noticeable on a display of this size. You really have to look very closely to notice though.

Like the Surface and iPad Pro, the Galaxy Tab uses a keyboard cover for when you need to get down to serious work. Unlike those devices, the keyboard is included, and it comes in a color to match the tablet’s back.

Thankfully, Samsung doesn’t seem to have made any concessions to include the keyboard with the tablet. It has good travel for a keyboard case, at 1.4mm, and the keys are full sized with little wobble. It’s not quite as good as the keyboard on the Surface Pro 4 – I miss backlighting, as well as being able to set it at an angle – but it feels much better than the shallow and bouncy keys on Apple’s iPad Pro cover.

Speaking of improvements over the iPad Pro, the keyboard can prop display up at two angles without any complicated origami. That’s because the keyboard covers both the front and back of the device, and easily snaps into the two positions using magnets. It also means that nearly the entire device is protected from scratches and the elements.

At first glance, the touchpad was responsive as any Windows one I’ve tried – the 2015 MacBook Pro being the golden standard – with no jitteriness that I could find, adequately clicky feedback and a smooth texture. It’s a little smaller than the one’s on a traditional laptop, but that’s understandable given the tablet’s size.

The TabPro S is clearly not meant to be a desktop replacement; you can choose either 128 or 256 GB of storage, but specs are otherwise limited to 4GB of RAM, a 2.2 Ghz Core m3 processor, and Intel HD 515 graphics. The RAM is particularly worrisome, but as was the case with the even lesser spec’d Surface 3, it didn’t feel like a slouch in the time I was able to try it.

Windows 10 felt smooth and animations didn’t drop frames. I was also able to play 4K video without a hitch in Microsoft Edge, though Chrome was a another story (but Chrome struggles with 4K video even on powerful laptops). The speakers were also plenty loud for a tablet; there isn’t much bass, of course, but at least they didn’t sound too tinny.

At ‘Lapability’ is always a bugbear with 2-in-1’s, and the TabPro S faired decently well. While only having two angles is fairly liming, the flat surface of the keyboard case proved atable when used on my lap.

As a tablet, the TabPro S’ is both thinner and lighter than the iPad Pro (albeit the screen is a bit smaller), making it one of the few convertible Windows 2-in-1s that you might actually want to use as a tablet.

That said, it also suffers as a laptop because of it; like the 2015 MacBook, there’s a single USB-C 3.1 port for charging and accessory adapters.  On the plus side, Samsung’s Adaptive Fast Charging means you can go from zero to full in 2.5 hours.

I also got a chance to try out a pre-production stylus with the device for a minute or two. It has two buttons and seemed responsive enough in OneNote, though a bit less accurate than what I’ve come to expect from Microsoft’s recent Surface pens.

There’s a lot to like here. While the specs are nothing out of this world, Samsung presents them with enticing hardware and a competitive price.

At $899, its main competitors come from Microsoft and Apple, and neither of those are necessarily better options at first glance.

The Surface Pro 4 has very similar specs in its $899 configuration: 4GB of RAM, 128 GB storage and a 6th gen Core m3 processor. But that price doesn’t include a keyboard (though it does include a stylus), and the TabProS’ thinness and lightness make it a better tablet. Meanwhile the iPad Pro starts at $799, but costs $949 for 128 GB of storage, and also doesn’t a bring keyboard… not to mention a desktop OS.

Unlike either of those devices the TabPro S has no aspirations to be a powerhouse. There’s only the one processor and RAM combination, and Samsung spent a fair amount of time talking about the TabPro S as a computer for everyday productivity, particularly in education.

Now we’ll just have to see how performance and battery life hold up in the real world; it’ll be put on trial soon, given it goes on sale tomorrow. If Samsung can stick close to its claim of 10.5 hours of battery life, it might just have a winner on its hands.