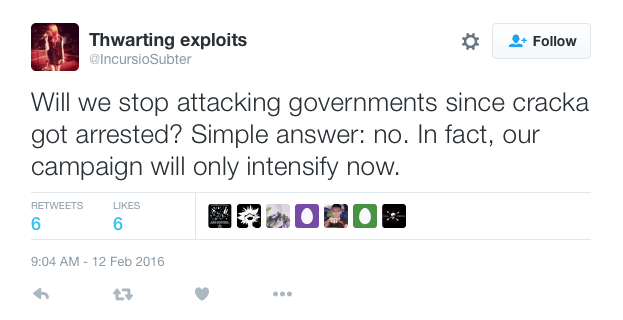 Monday, we reported that a hacker followed through on a promise to release personal information on over 30,000 employees from the Federal Bureau of Investigation (FBI) and Department of Homeland Security (DHS).

The hacker, it turns out, is a 16-year-old boy who is believed to be the notorious ‘Cracka,’ the leader of the hacker group, ‘Crackas With Attitude’ or CWA.

CWA is responsible for numerous cyber attacks on US government officials, such as CIA director John Brennan, US spy chief James Clapper and President Obama’s senior advisor on science and technology, John Holdren.

Many hackers are serving longer prison sentences than murderers and child molesters. Do you not see something wrong with our justice system?

The group also allegedly accessed a series of law enforcement portals and, most recently, perpetrated Sunday’s Department of Justice attack where it accessed sensitive data including the personnel files of FBI and DOJ employees.

Members of CWA are not to pleased with their leaders arrest and promised to intensify their efforts until they’re captured. According to conversations CWA members had with Motherboard’s Lorenzo Franceschi-Bicchierai, they’re expecting these arrests any day now.

Read next: This Nigerian scam is literally out of this world