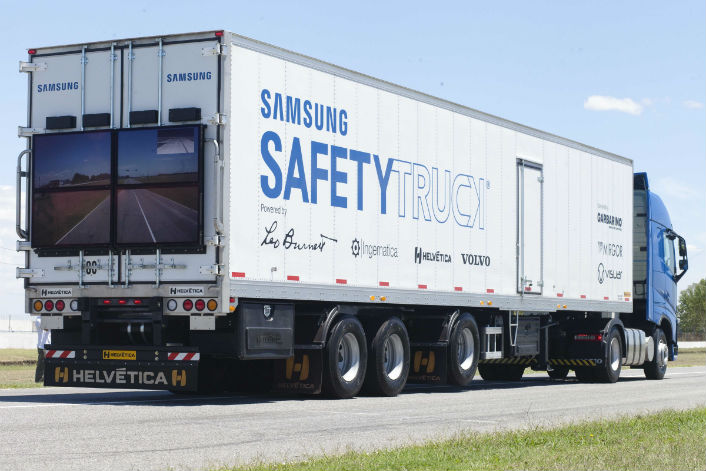 Samsung showed off a concept in 2015 of a truck mounted with screens and cameras so drivers on the road behind are able to see if it’s safe to overtake – but it didn’t say if it would actually build them.

Now it’s getting serious about the initiative, announcing that it built a prototype version in partnership with Helvetica SA and Volvo Trucks Argentina. The Samsung Safety Truck features two front-facing cameras and four high-definition OH46D video screens on the back.

The idea is that the equipment makes it safer for drivers to check if they’re able to overtake large trucks by seeing if there is traffic or bends ahead, rather than just guessing.

Those screens on the back are IP56 certified, the highest certification for both dust and water resistance so drivers can see the road in front regardless of the weather. Amusingly, for anyone looking to geek out on the specs, Samsung gives their full details, including the fact that they only support USB 2.0.

The Samsung Safety Truck will hit Argentinian roads in the coming months and will be tested for over a year to see if it helps prevent accidents. All being well, the company hopes to roll out the idea globally in the next four months.

Read next: RIP Yahoo Games, my favorite online games portal a decade ago