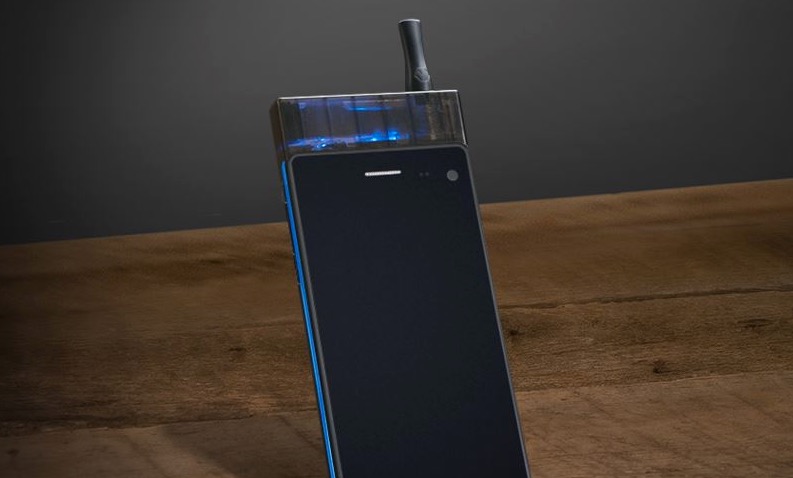 Last year we declared the smartphone war was over, but we’re prepared to eat our digital hats as news of a smartphone that users can smoke has surfaced.

The Jupiter IO 4 is the world’s first 4G enabled e-cigarette phone, a category we had no idea there was so much demand for. For just $499 you can buy a phone running Android KitKat 4.4 (released in October 2013) with a 5.3-inch display that has a removable plastic cover that allows you to attach liquid vaping cartridges that you can then, yep, smoke.

Users then attach a mouthpiece and push a button on the phone’s display to control when the phone vaporizes the liquid inside the cartridge. The phone will then track how much vaping is left, what flavor is currently attached and how many puffs you’ve taken over time via an app. In case, you know, you want to eventually quit vaping and thus ruin the point of this phone.

It also comes with a, “Groundbreaking Lightning Box which contains a phone, a hex wall charger and USB cord.” Upon closer inspection it’s just, er… a box.

The company has yet to declare what the processor speeds and camera capabilities are, but they have stated the phone will have two batteries to cater for the increased strain vaping will put on the longevity of the phone.

“We feel that Jupiter will change the world as we know it. You will soon vape your fluids, medicines, and nutraceuticals through Jupiter,” said the company on its website.

The company had already unveiled its IO 3 version late last year, but the 4 has only gone this week.

Is this going to “change the world as we know it?” Hmmm…. probably not.

➤ A smartphone you can smoke: Is the Jupiter e-cigarette mobile the ultimate gadget for vapers? [The Mirror]

Read next: The White House is now on Snapchat