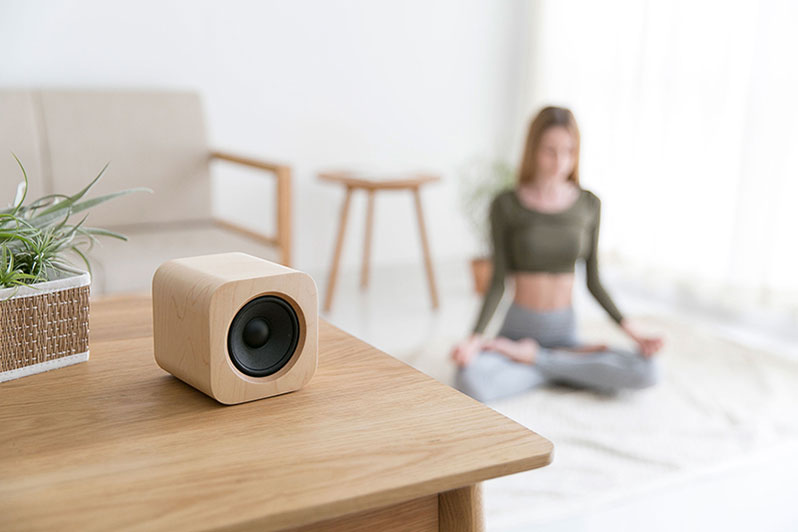 I don’t often agree to test products unless they interest me. The Sugr Cube, piqued my interest immediately.

This Kickstarter-funded product is a Wi-Fi speaker with a real wood enclosure, Spotify Connect built in and a control interface that relies on touch and movement rather than buttons.

It’s the minimal design and control system that inspired my curiosity.

What jumped out at me initially is just how good the speaker looked. It sits in a real wood enclosure with a port hole and a volume knob in the back and not much else. Noticeably absent are the knobs, levers, buttons and embellishments of other speakers in my office.

Instead of knobs or buttons, the Sugr Cube uses movement as a control mechanism. To skip forward, you tilt the speaker to the right. To go back, you tilt to the left. To play, or pause, you simply tap the top of the enclosure. This, is the feature I wanted to try.

I tilted, tapped and repeated until the idiotic grin slowly faded from my face after I realized the novelty was wearing off and I didn’t want to have to touch the speaker all day while listening to Spotify.

Luckily, the Sugr Cube works like any other speaker in the sense that you can control it from your laptop, tablet or smartphone instead of relying on the cool, but ultimately taxing, tilt and tap controls. It also has an app that offers up the same functionality as well as additional options, such as the ability to pair two speakers for stereo sound.

The sound quality was nothing short of amazing.

For a 3.5 inch speaker, the way it filled my house with rich sound was truly something to behold. As a writer living in Mexico, I reside in the land of big speakers. You’ll find them at any holiday gathering, party or random Tuesday get-together in my neighborhood.

It amused me to think that I might be able to show up to one with this little cube instead.

As great as the sound is, and it truly is great, it’s not perfect. For rock and pop, it was more than adequate, but when you ventured into EDM, hip-hop or R&B, in my mind, it fell a bit short. Bass response was there, but it lacked any real presence when mixed with the rather bright highs and the solid-performing mids.

I can best compare it as switching to earbuds after listening to over-the-ear speakers all day.

That said, bass response was on par with that of similarly-priced offerings from Sonos and Bose, so this appears to be less a fault of the speaker, and more of a limitation of its size.

The clarity, however, was outstanding. Even turned up to the point where I normally squirm a bit, the Sugr Cube showed no signs of distortion.

Overall, I found the Sugr Cube to be a beautiful speaker that really packs a lot of performance into a small package. My only disappointment was in the bass response, but, like I said, this seems to be a limitation that plagues all speakers this size.

If you want one for yourself, it’ll set you back $229, and you can purchase one at the Sugr Cube website.

Read next: Twitch ups its DM game with better Whispers