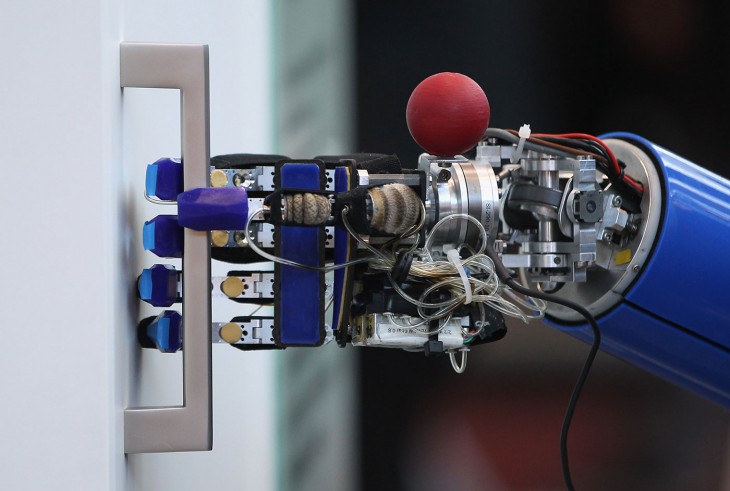 There’s a lot of paranoia that robots could one day be responsible for doing our jobs. I’m not immune to this.

In a new report published Wednesday, Silicon Valley Robotics, a non-profit comprised of several robot companies, came to a general consensus that robots definitely won’t be taking your job, at least, not any time soon.

The report details a more likely occurrence, which will be robots doing repetitive and menial labor and freeing humans up to do managerial or creative tasks that robots are not yet capable of.

According to Steve Cousins, CEO of Savioke, “[Our robot] Relay is not designed to replace people. It’s designed to be a productivity aid for the people who are already there.”

He compares Savioke’s current project, Relay, to a hotel front desk worker: it can’t do all of the manual duties of the job all the time, but it can fill in during short periods while the worker is getting coffee, for example.

Relay is like any other tool right? You don’t need power nailers, for example. You could have workers hammering away all day, and then deal with the repetitive stress injury that comes with that job, like roofers and such. But someone invented power nailers, so people can work faster, they can do more roofs. The idea is not that we’re trying to put roofers out of work. We’re trying to make them more productive and that’s how we think about Relay.

Another example of a robot aiding, but not removing, humans from their jobs is the OSHbot, by Fellow Robots.

According to Marco Mascorro, CEO and co-founder of Fellow Robots:

Today, we have a partnership with Lowe’s to launch OSHbot, which is a customer service robot that helps customers find things in the stores. When the robot is navigating in the store, it knows where all the products are located.

This addresses a need, as the typical Lowe’s employee is certainly there to help customers, but they have other tasks as well, such as: cutting material, loading/unloading shipments, designing kitchens and bathrooms, and checking out customers.

The ability to limit interruptions by humans during these tasks has the potential to save Lowe’s millions each year, all while keeping humans employed.

So fear not, humans, robots aren’t coming for your jobs, at least not yet.