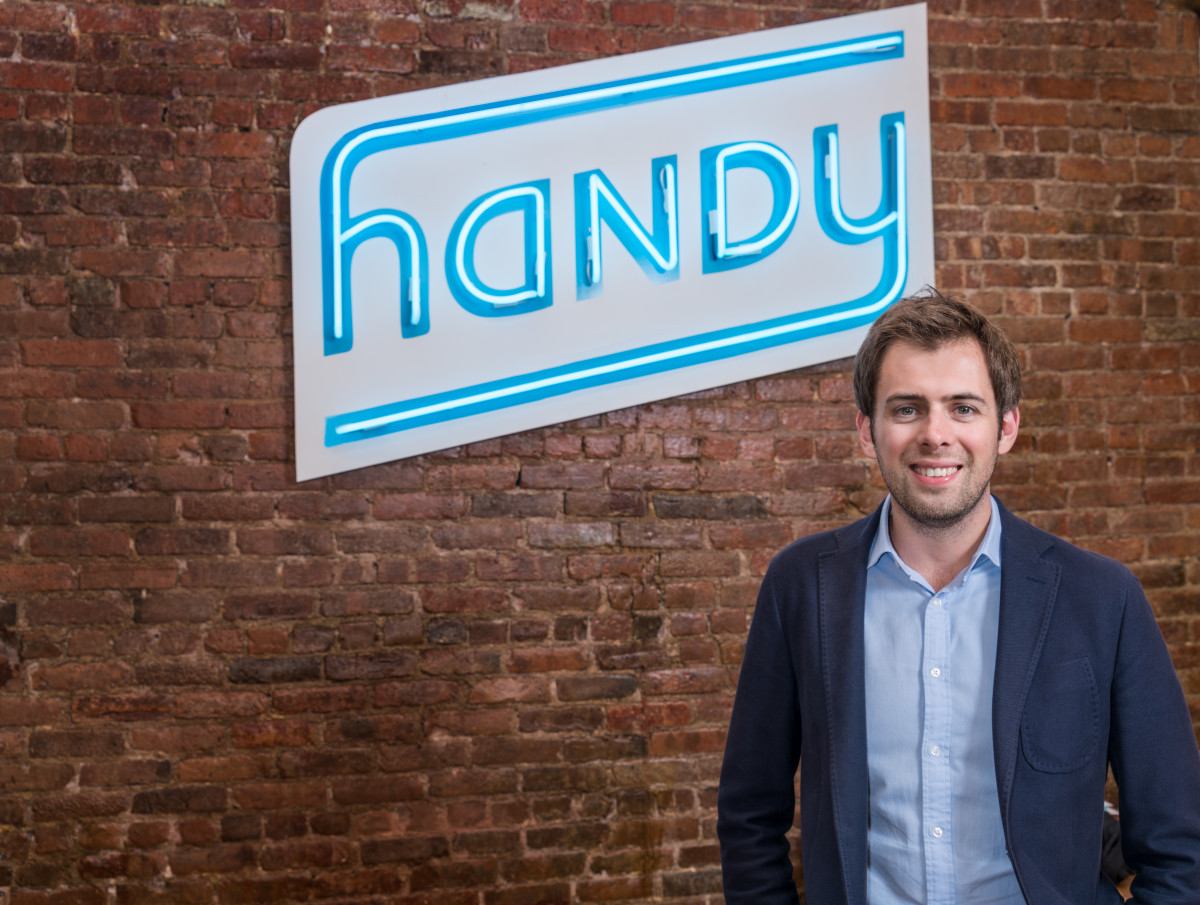 When it comes to on-demand cleaning and handyman services, Handy (previously Handybook) is dominating the space, despite only being three years old. Having announced a round of over $50 million this week and now being worth an estimated $500 million, it’s hard to contemplate what the space would be like without it.

I spoke to Handy’s founder Oisin Hanrahan at the Web Summit today about the company’s growth, future plans and how being based in New York has played a key role in the company’s success.

Being from Ireland, the Web Summit is an excuse for Hanrahan to come home, but it’s also an opportunity to catch up with a previous colleague in Web  Summit founder Paddy Cosgrave. The pair went to college together in Dublin and actually started two organizations before both venturing into their current solo projects.

Before Handy and the Web Summit, they launched MiCandidate – a platform that provided media companies with political content. They also started the Undergratuate Awards – a non-profit organization that has since grown to become the biggest of its kind.

Naturally, I asked if Oisin would be following the Web Summit to its new home in Lisbon and he said: “Of course I will.”

So, going from political content to on-demand cleaning is a big step and I wondered if Oisin had a particualr penchant for cleanliness or if it was the dollar signs that attracted him to start Handy. It was neither.  He explained:

When I was in college, I spent three years working on developing real estate in Hungary. One of the things I found was that it’s quite difficult to get people to do small tasks inside apartments but I didn’t start handy off the back of that alone. When I was done in Hungary, I went to live in London and worked for Excel Ventures. At that time they were investing in the on-demand taxi service Hailo, which was very successful in its space. I thought a lot about how to apply that concept to other areas but then I forgot about it for a while again.

It wasn’t until he moved to Boston to an MBA at Harvard that Handy (then Handybook) came to life. He was living with two friends – one of whom was his co-founder and one of whom was messy. After working on the concept during the summer between first and second year, the pair decided to drop out of college and get stuck into making Handy a real business.

After raising $50,000 in seed and incubator money that summer, the pair decided that Boston wasn’t the place for Handy to grow. Neither had any real reason to be located there so they looked at where would be the optimal location for the company, its customers and stakeholders.

At this point most startups would have headed for Silicon Valley but Handy’s founders opted for New York instead. I spoke to Oisin about why this was the natural fit for them:

We were trying to work out where was the logical place to put this organization and keep its stakeholders in mind. New York was obviously going to be the biggest market in the western world for this type of service. It is the densest market by far, has a vibrant, growing tech scene and could really be a billion dollar business on its own. It’s the perfect place for on-demand services or companies that look like Handy.

Competition in the space

And there are a lot of companies that look like Handy. Speaking about any potential competition, Oisin assured that there is “no other company operating at anywhere near the scale that Handy is operating at in a transactional way. It’s the biggest player by a very large multiple.”

I joked about a recent experience I had where I tweeted Handy’s customer service about a booking and suddenly I was getting bombarded with tweets from other cleaning companies offering me their services. Oisin says competition isn’t something the team at Handy focuses on though. He said:

Rather than focusing on anyone else in the category, we are focused on how we can build on our lead.

Having a lead in a two-sided marketplace is advantageous because ten years ago that type of marketplace wasn’t something the industry really understood. This has given Handy a level of security as its grown. Oisin explained:

Businesses, customers and contractors are on the same page now. It’s very much a density issue and density in any particular city and vertical is important for a company.

Once you hit scale or a moment where you are multiples bigger than anyone else, your unit economics will become materially better because your customer acquisition costs get lower and the business just improves drastically; Retention gets better and all sorts of really positive things happen. Our goal at handy is just to expand on that and continually invest in making that experience better for the customers and the professionals.

Companies like Handy have to maintain a balance between its contractors and customers satisfaction alike. For the professionals using Handy, it’s about having the flexibility to work when they want to earn supplemental cash and for the customers, it’s about having the flexibility of booking a cleaner or handyman on the spot or for a particular day and time and know that the person who’s coming will be reliable.

Oisin told me that when Handy was in its early days, he looked at the process of having someone come to work in your home on a small job for customers and from the perspective of being that cleaner or handyman. He found that it was a “clunky” experience for both:

We all know how difficult it is for the customer going to friends for referrals or browsing the Golden Pages to find someone. Then they worry about whether that person will show up, if the job will be done well and the cost. For the contractors, it’s equally as difficult. They don’t always have the tools to market their services, build a customer-base or who to trust to advertise them. So that’s what Handy is all about really – making the experience better for people on both sides of the table.

With an additional $50 million in its account, Handy is in a “very lucky place” as its founder put it. The focus for the next six months is to continue focusing on its current cities and services and experiment a little with other services.

At the moment, 80 percent of its business comes from cleaner bookings. The other 20 percent is from handyman bookings. The company recently experimented in New York with a different type of service – an option to buy furniture from third party stores like Ikea through Handy and have someone collect it, deliver it and assemble it in your house. Oisin said they won’t stop there though:

We will realize the delivery of every service to every home and it’s just a matter of which services we start to focus on first.

It was obvious during our interview that the team at Handy is something its founder is very proud of. having recently made some big hires like former Amazon executive Jeff Pederson, the former head of engineering from Tumblr and a former head of data science at Birchbox. Oisin says that hiring well is a core focus for the company and they will continue to invest heavily in it over the next six months.

The company has 160 staff at the moment and over 10,000 contractors. Having such a large number of contractors who aren’t officially regarded as employees is something that brought another similar company to its knees and eventually its shuttering. Homejoy was facing four lawsuits from contractors regarding their status with the company when it shut up shop earlier this year.

I asked Oisin about the potential risk of misclassification of contractors but he says Handy has no plans to change its contractors status to employees. Instead, he says they will continue to focus on making the flexibility for its workers as free as possible. Oisin says at the moment 80% of the contractors work less than 20 hours per week, which is why it appeals to busy parents and students alike as a way to make some extra cash.

Homejoy founder Aaron Cheung also faced a backlash recently when it emerged that while he was launching a new service, he reached out to former Homejoy customers citing their data, which had been saved without users’ consent. Oisin confirmed that if you shut your account with Handy, your data will not be saved. If users are worried about that, they can also submit an additional request to have the data removed.

While on-demand cleaning may sound like a niche area to get into right now, consider that in three years’ time, Handy has turned a luxury service into an affordable staple.

Handy’s goal to bring as many services as feasible to the home is ambitious though.It’s an area that people are spending billions of dollars on, so Handy will naturally have competition. Two startups — Thumbtack in the US and Hassle in the UK — are a direct challenge to Handy, and warrant strong consideration from customers.

I have no doubt that Handy will be using its penchant for rapid growth through venture funding to keep its gap in place and maintain its position at the top of its game. It’s just not going to be as easy as it looks.

Read next: How 2 startups got my attention by being smart, direct and personal – but not creepy