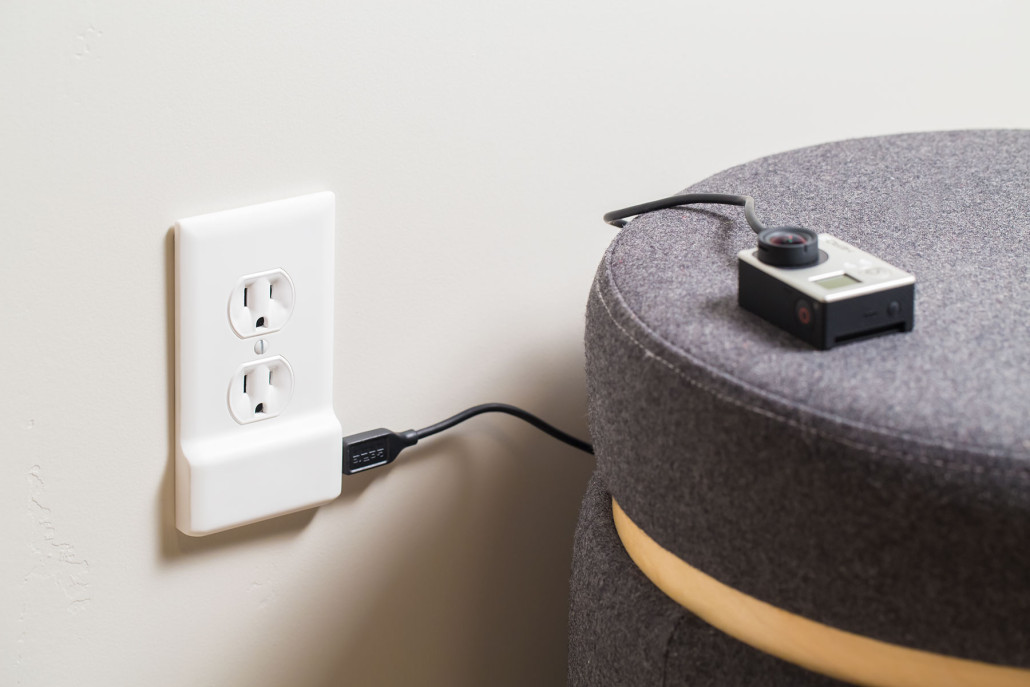 At some point, you’ll need to plug your phone in. Even if you charge wirelessly, that charger plugs into an outlet. SnapPower Charger is hoping you’ll keep the cord, but drop the wall charger.

SnapPower is a replacement for your existing outlet cover, but cleverly (and covertly) snipes power from your home.

With two prongs that pinch onto the screws holding your actual outlets in place, SnapPower routes a bit of juice to a USB outlet that sits just below your main plugs.

It’s still plastic, like your existing outlet cover, but the integrated charger keeps both outlets free. It’s like having a third outlet dedicated to charging your mobile devices.

It also comes in a few different colors and styles, meant to fit any home.

Because it has a running electrical current, you need to cut power to the outlet before installing SnapPower. It’s likely as simple as toggling a breaker, but do make sure you cut the power first. Don’t electrocute yourself.

Once you’ve got the power off, take the existing plate off and slide the SnapPower prongs over the screws holding your outlets in place. There’s a very handy installation guide, and SnapPower can be mounted with the USB port on the top or bottom.

After you’re done installing SnapPower, turn your power back on.

SnapPower is passive, and that’s why it’s good. It won’t jump out at you or make itself known, but it’s there waiting for you when you need to plug a device in.

As far as charging your device, it does so in about the same time your wall charger does. I found it to be right in line as the included Apple charger when powering up an iPhone 6.

Because it’s passive, SnapPower also doesn’t take advantage of things like Qualcomm’s QuickCharge. You won’t get any bells and whistles, but you do get your outlets back.

The ‘charger’ SnapPower houses is probably the same as the one you’re plugging in, though. The input is 120V, while the output is 5V.

It’s $20. That’s a bit steep for an outlet cover, and I can’t say outfitting an entire home would be cost effective for many. SnapPower does have bulk order pricing, if you really wanted to.

That’s not really the goal, though. Considering that we’re creatures of habit who tend to charge devices in one place while at home, SnapPower makes a lot of sense. If you charged in the kitchen, it would be nice to have the outlets open for kitchen gadgets.

The same could be said for the bedroom, or a hallway table. If you’re going to charge there habitually, it may be a good idea to grab a SnapPower.

If you’ve got three devices you use daily — say a tablet, smartphone and smartwatch — SnapPower suddenly becomes quite attractive, especially if you’re one to charge nightly. I’ve been doing just that, and having all my stuff centrally located while charging is a pleasure.

Read next: How to make your team love experimenting