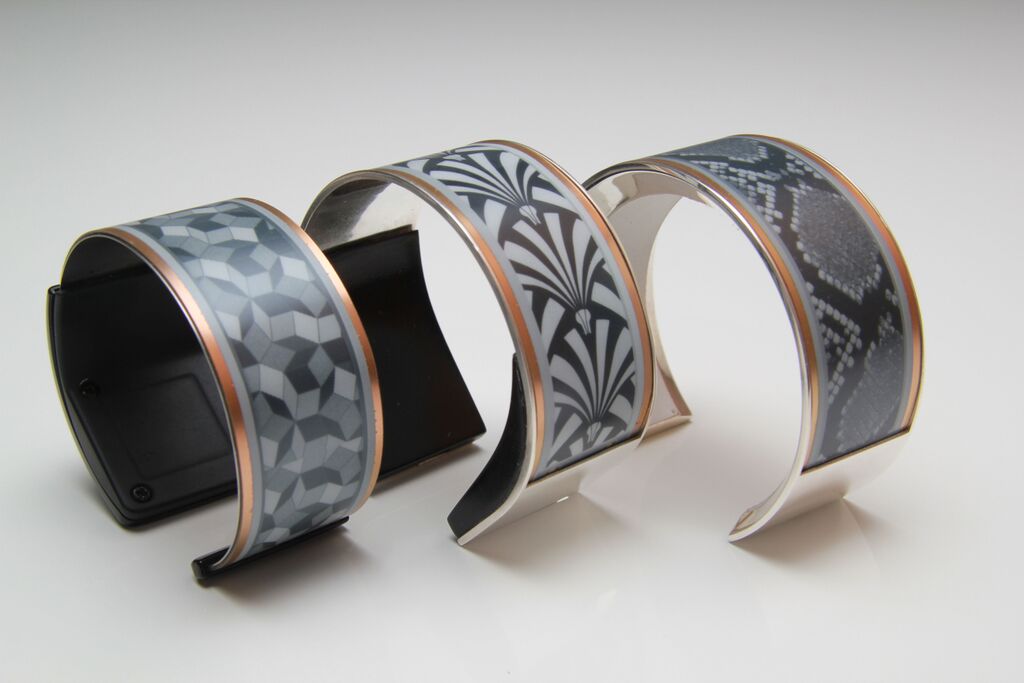 For the most part, the conversation surrounding mainstream, everyday wearables has been limited to a few ideas with the same sort of visual technology that we’re used to seeing elsewhere on our phones or other devices. That is especially true when it comes to viewing bracelets and watches — they can feel a bit unisex, and a bit same-y as time goes on.

I believe that’s what makes the Eyecatcher, a smart bracelet designed by startup Looksee Labs, such an interesting prospect. Instead of relying on LCD displays to power information, the company’s founder Per Ljung, decided to pursue flexible e-ink.

“You have an always-on display, and you should be showing something interesting,” Ljung said. “This is a novel way of being able to do that, instead of having a little square display that’s usually black.”

The product is currently available for pre-order on Kickstarter, with early-bird pricing at $214.

Ljung, a former Motorola and Nokia executive who has been researching and developing wearables since 2011, told me that the Eyecatcher’s display is designed to be low-power, requiring a charge as little as once per year.

But it’s also designed to cater to a female wearable fan, offering two different bangle widths for women in addition to a form factor for men. This, in particular, is interesting, as chasing after a fashionable wearable that doesn’t sacrifice space or mysteriously cost extra money than the standard (re: men’s) option.

Ljung likes to describe the features of the Eyecatcher in two different terms: function and creativity. Originally, the Eyecatcher was designed to provide notifications and updates directly from the smartphone. But as he continued meeting with women, he said he recognized they were interested in being able to know about voicemails, texts and other information, and were taken with the concept of changing the look of the bracelet.

“We realized they were not interested in information. Women wanted pictures, patterns — an emotional connection,” Ljung said. “So we made a jewelry piece and showed it, and women pulled out their credit card to order it.”

It’s the idea of self expression Ljung hopes will resonate with consumers — and on appearance it looks like the kind of wearable you’d get your mom or a loved one. But this is actually a good thing: there’s a mainstream, user-friendly appeal to the bracelet that makes it more of a fashion item than a piece of technology.

The operation of the bracelet can be done from any smartphone or tablet, and users can upload any pattern available onto the wearable as well as photos. The images can also change periodically in a slideshow format.

There is also a way to subscribe to art, which will send graphics to different bracelets via the cloud.

When it comes to the information side of things, there are customizable notification overlays and watch faces to provide users with the information they want to see. These displays update via bluetooth from the phone, and can push when available. The size of the overlays can be adjusted via the app, but they’re static once they’re placed.

But beyond that, the bracelet isn’t really like any other smartwatch or wearable. There aren’t any buttons, no touchscreen interface, and no color. Ljung says the lab is exploring options, but it is tricky to fit those features in a flexible, low-power form factor.

“The downside of using something in color are two-fold — one, it’s not flexible, and two, your battery life would be measured in minutes, not hours,” he said.

It’ll be interesting to see whether the Eyecatcher, which is set to debut in January of next year, becomes the wearable with the low-barrier to entry that mainstream users are looking for.

Read next: A new 'premium certification' will make sure your next HDMI cable can stream in 4K