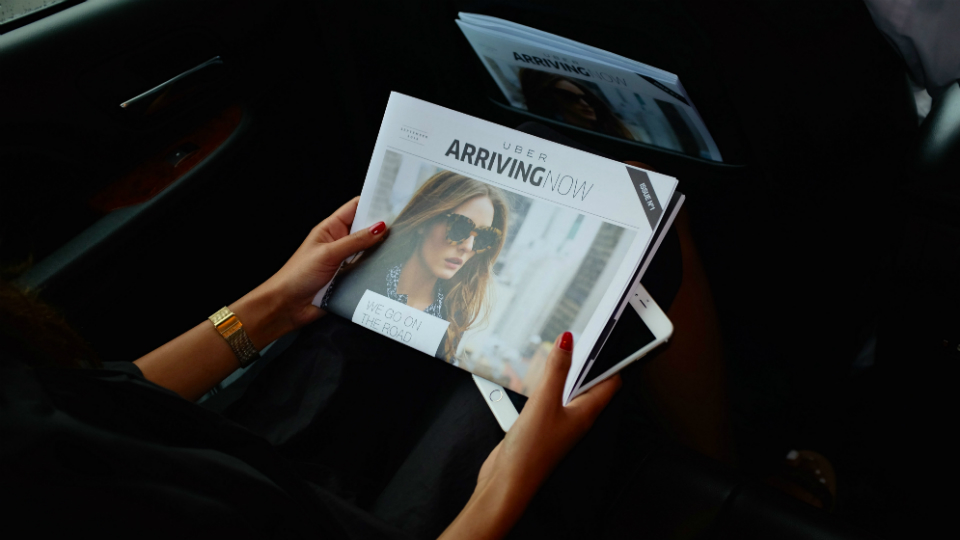 Uber is launching its own magazine in celebration of Fashion Week –  if you ride one of its NYC cabs, anyway.

Called Arriving Now, the publication features “pro tips, hotspots, and exclusive details about upcoming promotions.” It will likely be most useful to people who are only in New York City for Fashion Week and are trying to find new things to do during their stay.

Though most cab rides are likely too short for reading through the entire publication (although its length isn’t specified), Uber says you’re allowed to take them with you. There doesn’t appear to be an online edition, so you’re stuck with what’s in the cab.

It’s basically Uber’s take on in-flight magazines for air travel, though without trying it, it’s hard to say whether it will be able to live up to the majesty of SkyMall.

Uber calls says this is the “first edition” of Arriving Now, but doesn’t specify it will be temporary publication for specific events, if it will be a permanent recurring fixture or if it will come to cabs in other regions besides NYC.

Nonetheless, it’s a new way for brands to cash out on Uber’s clientele, and it’s not hard to see how they could continue tailor advertising to ongoing local events.

While NYC is still more known for its yellow cabs, visitors may be more comfortable using a service that’s also available in their own region, making them a prime target for advertisers. Within NYC proper, people who use Uber frequently instead of the 24-hour public transportation are likely likely be wealthier and more tech-saavy.

If Uber continues to produce these publications, we’d expect to see more in-car magazines for film or food festivals, or major citywide events in other regions such as E3 in California or CES in Nevada.

It’s likely the company will localize the magazines for each region, perhaps under different names.