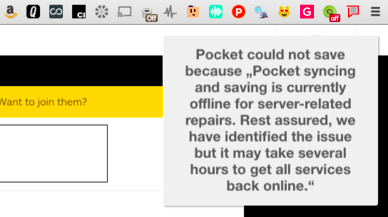 The popular ‘read later’ platform Pocket has been down for 20 hours after what its engineers say was a “syncing error” occurred during an upgrade of the site’s code.

Thanks for your support! It saddens us deeply that Pocket is down. We're sharing information about the outage here: http://t.co/qJKxtOCeb9

The company’s official statement was: “This afternoon, we were deploying new code to the site. During this process a syncing error occurred, which required us to re-run our syncing process from earlier in the day. This took a significantly longer time than we expected.”

If @Pocket is down, how will I add to my growing virtual pile of newspapers in my closet?! pic.twitter.com/y5UQU2uuJe

And despite an update declaring everything was under control and the service would be opening up again four hours ago, a large number of people are still reporting that it’s down.

My favorite "read later" plugin / app @Pocket down for 14h or so now. Hope for their own sake access is restored soon – must be pretty bad…

And they are starting to freak out…

Ugh, @Pocket is down, so now I have to read books on my travels like some sort of pre-internet Philistine. What is this junk?

Pocket being down is ruining my life

The service is still experiencing issues and reports of it being down are still coming in from users. Pocket says it is continuing its work to get all of the features back up.

Trying to work on my boozeletter while @Pocket is down pic.twitter.com/24Ve8fnPbM

A Pocket representative has told TNW: “Pocket is largely back online and users can now save and access their Lists. We’re now working to bring back a few remaining features.”

Read next: Learn to code hardware with the Raspberry Pi Hacker Bundle