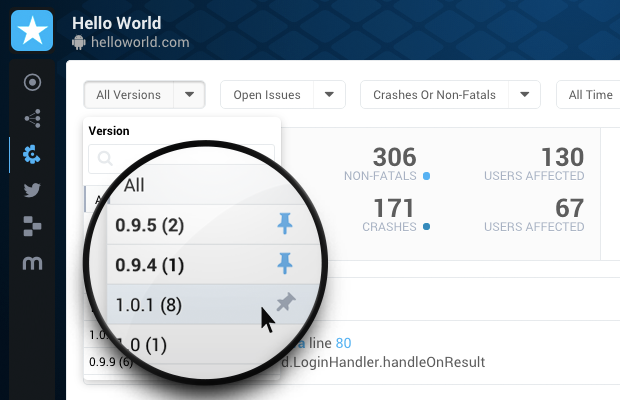 If you’re working on several builds of your app, tracking what’s going wrong — and where — can be tough. Crashlytics now has a new feature called Pinned Builds to make the process easier.

Using Pinned Builds is simple; just put a pin on the build you’re most interested in, and it’ll always populate at the top of your version history on the Crashlytics dashboard.

It’s a great tool for beta testing apps, especially if you’re A/B testing new features or tools. When APIs change, it can be troublesome to get everything in working condition for a public release. With Pinned Builds, you can track what version works best for you and your users and move forward.

Should you have others working on an app with you, Pinned Builds will also surface a the top of their Crashlytics dashboard.

Pinned Builds is currently live, and is the headliner for a Crashlytics update that brings several smaller changes to iOS, Android, Web and Mac.

Read next: The sharing economy: sharing for money