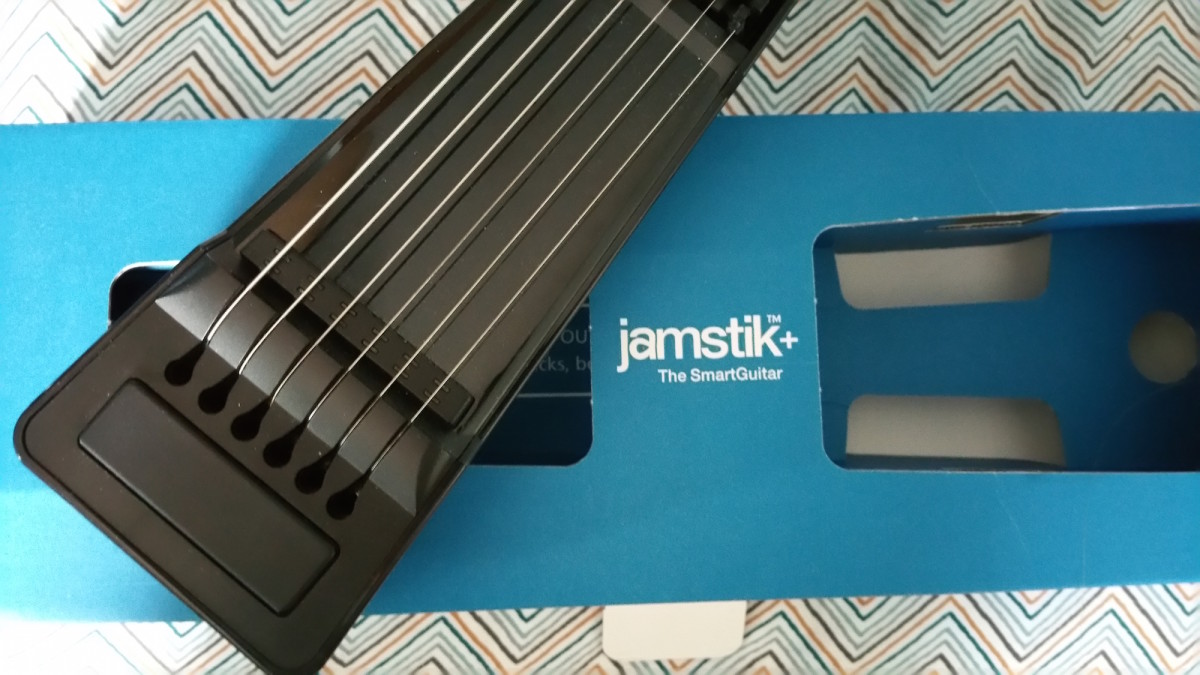 When I was growing up, my mom would put me in a variety of classes: ballet, piano, swimming. After a semester of each course, I would get bored and move on to something new. The varied curiosity was fun at the time, but eventually it led to my lack of skills in any one outlet.

I didn’t realize how learning could be fun until after I left college, mostly because I felt I was finally able to choose the things I wanted to learn, not what’s required in a curriculum. And as of 2015, it’s been all about music.

Enter the Jamstik+, a portable electronic guitar controller that acts as both an instrument and an e-teacher. The second-edition model comes with a companion app that teaches the various finger positions of each chord to help you learn how to play a complete song with a Guitar Hero-esque interface.

I spent a month learning to play with the Jamstik+, and here’s how it went down.

The Jamstik+ has an all-plastic body, with just five frets and six chords. The side of the device contains the power and D-pad buttons which lets you change the tune of the guitar, so you don’t need a capo.

The Jamstik+ itself doesn’t make any noise; you have to use it with a Mac or iOS device and pair via Bluetooth to get the melodies to play. The package also comes with a strap and several picks to help you get started.

Since it charges via USB, the Jamstik+ is a little heavy at nearly two pounds. Most of the weight concentrates on the bottom half, which is where the hardware resides. That said, the device estimates a battery life of about eight hours, which should be useful for those carrying it on the go for quick lessons here and there.

One last thing to note: you can order the Jamstik+ according to your hand dexterity. If you’re a lefty like me, this’ll mean you won’t be able to share the device as easily amongst other musician friends.

There are several apps you can use the Jamstik+ with, such as jamTutor (the teaching app), jamMix (a music creator) and, of course, GarageBand. I mostly used the tutor app to learn various chords and train for quicker finger progression.

The free jamTutor app is essentially Guitar Hero on an app: you can go through each lesson, select a challenge or opt to free play and discover random chords. I sampled the app using an iPhone 6 Plus, which offered plenty of screen real estate to practice.

You can select various instrument outputs via the Jamstik+, which is great for GarageBand music makers. For my lessons, I opted for acoustic guitar as I also owned one for comparison. Jamstik’s output was close enough to the deal, but still had an electronic-y noise to it.

Learning via the app is simple. jamTutor told me which chords to play, and I just kept doing it until I held the strings down correctly and strummed in the correct pace the app suggested.

Compared to my real guitar, the strings felt a bit sharper and hurt my fingertips a little, but that could just be me holding down a bit too hard. Unfortunately, the Jamstik’s construction doesn’t allow you to change the strings’ tautness.

The Jamstik+ registers the chord not by which strings you’re actually holding, but the sensors in the fret board. If you’re learning to pick, the sensors at the end of each string also recognize which is being tugged so the device can play the right sound.

Which brings me to a little issue: Hammering. I’m not a guitar expert, but there are songs I know how to play on the uke that uses a little hammer-ons for some funk, and the Jamstik+ doesn’t seem to register this well due to all the sensors involved. You can also rule out chucking as the plastic underneath often gets in the way of a good palm mute.

Have I learned to play a real song?

After several weeks with the Jamstik+, I definitely feel more confident about how to place my fingers for each chord. However, like all self-teaching efforts, you need a lot of discipline to commit through the lessons. It’s very easy to get frustrated and turn the device off especially when you don’t have a person guiding you through what things are supposed to sound like.

I’ve learned enough chords to play an easy song (say, Outkast’s “Hey Ya”), but I often move back to my actual guitar to play and use the Jamstik+ just as a chord tutor.

While I wouldn’t necessarily recommend the Jamstik+ for seasoned players given its slightly toy-like sound, it is a cute, compact alternative if you’re looking to jam out to simple songs with friends on the road. I also think it’s a great tool for kids to get started with instruments before moving up to the real deal.

Still, at $300, it’s not exactly a cheap toy for a hobby. If you’re looking to cook up some quick tunes on GarageBand or just relearn some chords, the Jamstik+ is the perfect tool for casual playing. However, if you truly want to learn music, invest in a real guitar and lessons – be it via YouTube videos or a human tutor.

The Jamstik+ is available today, and can be purchased in three colors: white, blue and black.

Read next: Your Android lock patterns are too predictable: A study proves it