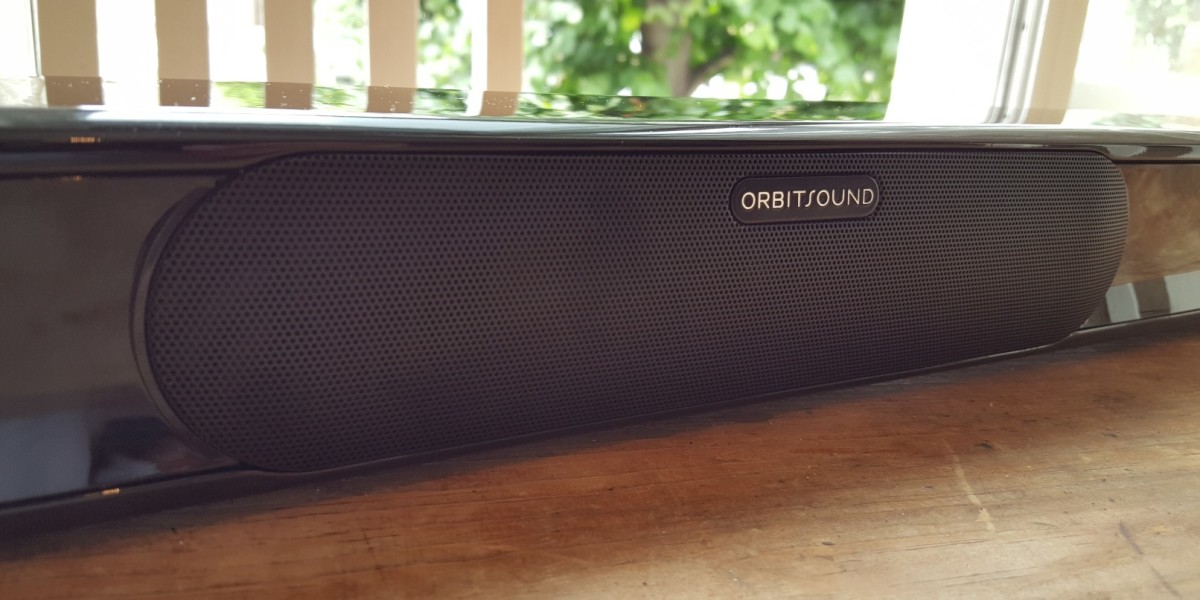 Last year, Orbitsound, a UK-based audio device manufacturer, launched the Spaced360 – a multi-directional Bluetooth speaker that uses the company’s ‘Airsound’ technology to fill an entire room with noise that emanates from just one point.

Now, the company is back with a new TV soundbar – the Orbitsound A70 – that incorporates the same technology, and I’m as skeptical as I was first time around.

In short, it aims to create an engaging and dynamic superior sound by melding digital and analogue audio technology.

What this also means is that the output has been specifically engineered to sound as it does, so there’s no equalizer for you to mess around with either at this stage, though this could potentially happen at some point down the line.

The set-up is comprised of the soundbar (75cm x 7.4cm x 6.5cm), a wireless subwoofer, and yet another remote control to add to your collection. It is a learning remote though, so you can program your regular TV or entertainment system remote to control the A70 too and then hide the original away.

While the A70 has slim and svelte good looks, with rounded corners and glossy piano black finish, it still manages to effortlessly blend into a room in a pretty understated way.

That same glossy finish will also look dusty very quickly if you don’t regularly attend to the build up.

Beneath the exterior and custom grilles, there are five speakers working together to produce the overall 300 watt output. It uses two 2-inch drivers and a high definition tweeter.

The ‘smart’ subwoofer has been designed to be as low-profile as possible (while still delivering the sound quality Orbitsound wanted) and connects to the soundbar via Bluetooth, allowing it to be placed pretty much anywhere you like.

It is still Bluetooth though, so you’ll want it within 30-feet or so for best results.

Setting up the A70 and subwoofer is a doddle, thanks to largely being a ‘wireless’ setup.

It’s not magic though, both the soundbar and sub need their own power sockets, so while they’re ‘wireless’, they’re also not without wires.

Connecting the A70 to a TV can be achieved via the optical port and there’s aptX and lossless Bluetooth support, so you can connect up a laptop, tablet or phone and stream music directly to the soundbar.

If you’re rocking tech that’s so old that it doesn’t have an optical output or Bluetooth as an option, there’s also a 3.5mm jack for plugging in the old-school way.

As it happens, the TV I tested the soundbar with is pretty old – around 10 years – but it still has an optical output. It’s broken though, so I plugged the optical cable directly into a Sky+ HD box.

When I did, I noticed that switching from an SD to an HD channel resulted in a really loud distorted noise. To fix this, I had to switch the Sky box settings to change the output mode to PCM/Stereo instead of Dolby.

For the record, Orbitsound doesn’t advise connecting directly to your Sky (or other TV) box, as it can result in the audio and picture being out of sync. It wasn’t for me, but if it is, you can set up a delay on your box to get it back in time.

The learning remote is one thing you’ll want to set up to work with your existing controller though, most likely. In my case, mapping the volume buttons to a Sky remote meant that my TV and the soundbar were both adjusted with a single press, which is handy. You’ll want your TV nearly silent though, else it’ll sound a bit echoey if used in conjunction with the A70.

On the rear, there are also wall-mounting points, in case you’d rather hang it below your (wall-mounted) TV.

How does it sound

I live on a main road in London. I’ve also been lucky enough to be keeping the windows open during a mostly clement summer (which is never to be taken for granted in the UK).

What this means, however, is that if I want to watch TV in the evening, I need subtitles to be have any chance of keeping up with whatever is happening, or I need to put the TV obnoxiously loud to hear it above the traffic noise.

The Orbitsound A70 does a surprisingly good job of counteracting this though, and not through sheer volume.

The whole point of the ‘Airsound’ technology is that it’s supposed to reduce (or even eliminate) ‘the sweet spot’ for listeners; that place in the room where the balance sounds perfect, but step a foot either way and it doesn’t sound so great.

With strong (non-directional) bass channeled through the sub, that leaves the lows, mids and highs to come through the soundbar.

The result is a crisp, powerful sound that can make the dullest movie more interesting. Falling asleep trying to keep up with a tedious plot? Turn it up loud and crank up the bass, and you’ll jolt yourself awake the next time there’s any sort of on-screen action.

As I live in an apartment, with neighbors above and below, it was easily loud enough for my needs.

It performs pretty admirably when you’re listening to music through it too, via Bluetooth (or otherwise). It’s not going to replace a high-quality dedicated stereo or even a top-of-the-range surround sound system, but then it’s a lot more flexible and a lot less hassle than either of those two options too.

My favorite thing about the A70, however, is them way in which it makes spoken words pop out the speakers. Speech is particularly clear and distinctly separated from the rest of the audio track when watching TV.

It’s pretty telling then, that when I mentioned that the Orbitsound would be returned soon, she immediately seemed disappointed and said she’d miss it. She’s never said that before.

That’s a pretty big achievement for a soundbar, and once again reinforces my belief that the best technology available is the services and devices that work for you.

It’s also nice that you can control the level of treble and bass, too. That allows you to keep watching action movies long into the night without disturbing the neighbors, though you won’t really want to listen to hours of music with the bass set to zero, obviously.

For me, the specific sound quality the A70 delivers is a really desirable outcome. For you, perhaps it’s not one that’s worth the £500 asking price, particularly if you already have a high-end soundbar or audio setup.

In this case, the spoken word output of the A70 was exceptional and tended to mostly come out the center of the speaker set up, meaning it didn’t get lost or muffled with the rest of the output. This meant that we could happily watch TV on lower volumes when we got some downtime together late in the day without it just being frustrating.

It might not sound like a lot, but it’s hard for me to put a price on that. And if I decide to buy one, I won’t need my aging stereo anymore.

Read next: See a Mario level turned into a Metroid homage