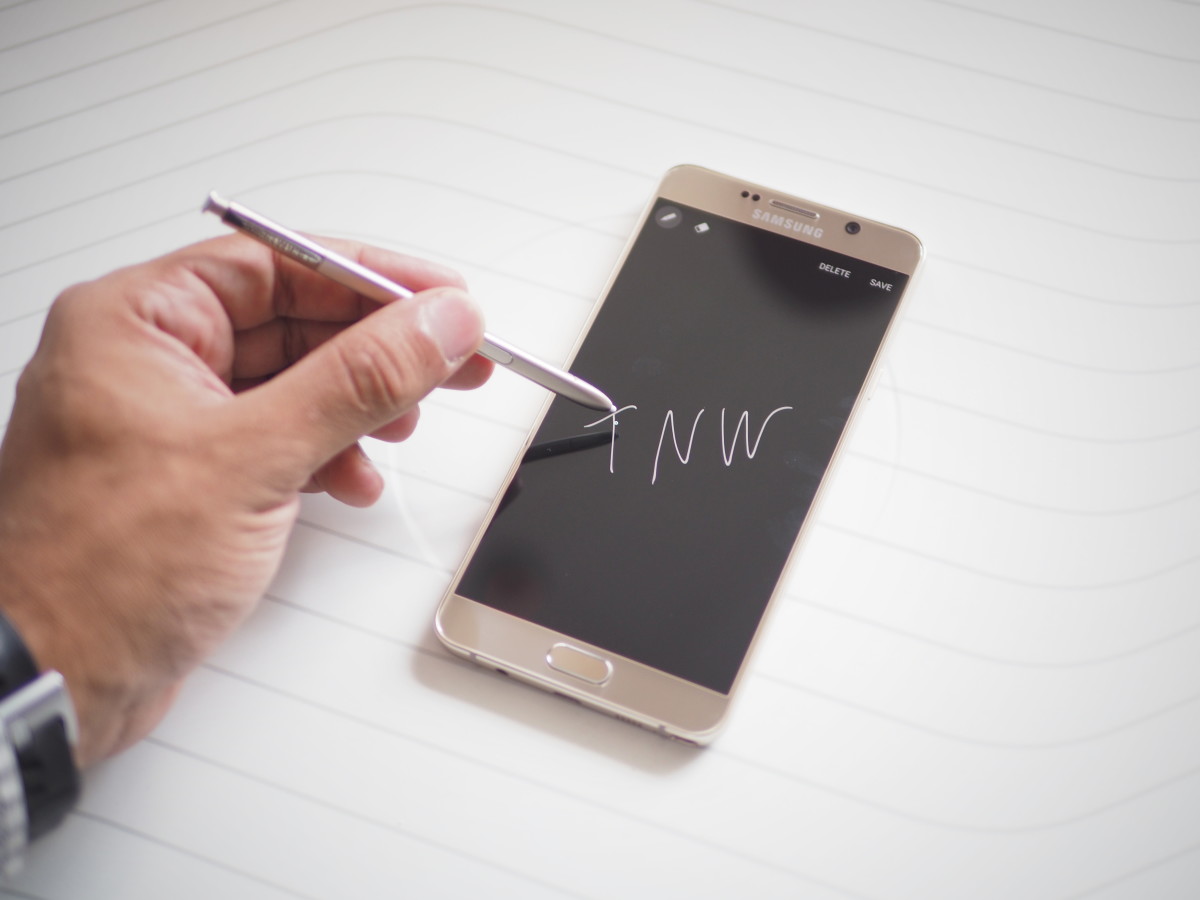 Samsung today unveiled the Galaxy Note 5, the newest version of the device that first popularized the phablet form factor. Borrowing multiple cues and features from the Galaxy S6 and S6 Edge, the Note 5 is the most radical redesign of the series so far. We covered most of the device’s specs and features in our announcement post, but how does it fare in the real world?

If you’ve seen a Galaxy S6 or S6 Edge before, you know most of the design story on the Note 5. Like its smaller siblings, the Note line now features an all metal and glass construction, losing the removable pleather back in favor of a slimmer, shinier build.

That allows it to feel surprisingly compact for a device with a 5.7-inch screen (the same size as on the Note 4).  The top and bottom bezels are kept to a minimum, and the side bezels are virtually non-existent. The glass back slopes inwards, making the device sit more comfortably in my smallish hands than I expected.

Unsurprisingly, it’s bit slippery – I almost dropped it the first time I picked it up. You might want a case, which will basically counteract any thinness advantages. The glass back is also a huge fingerprint magnet.

Nevertheless, it’s a beautiful phone, and has a display to match. The AMOLED display seems slightly more accurate than the panel on the Note 4, comparing them side by side. It’s still a bit oversaturated for my tastes, but Samsung wisely lets you customize the color reproduction in the display settings.

The S-Pen this time around is a little bit longer, with a heftier metal construction. It also now clicks in and out of place instead of just sliding out. You can also click the top like an old school dumb pen, which I found very satisfying, even if it doesn’t actually do anything.

Because there’s no removable back this time around, you lose the replaceable battery and microSD slot. The sleeker design likely necessitated some compromises, but it would’ve been nice to see Samsung keep the expandability on its larger phone line; Motorola’s latest Moto X still has a microSD slot, and the device is approximately the same size.

It’s fast. That’s no surprise given it features the same Exynos processor seen in the S6 devices, but I could not get it to slow down in the time I used it. I switched between apps without lag, browsing the Web was smooth, and the camera app open instantly by double-tapping on the home button.

Time will tell how it behaves once it’s loaded with a bunch of apps, but there’s no reason to expect it to perform worse than the S6.

My favorite new feature is the ability to seamlessly write notes with the S Pen. Once you pull the stylus out of its socket, the phone will let you write using white ‘ink’ on the screen – all without ever having to unlock the device or press a button. It’s almost like using an actual notepad, and since most of the screen isn’t lit up, it should help save some battery too.

The camera is the same module seen in the S6, and in my short time trialing it, it seemed just as good as ever. That is to say fast, with good saturated colors and ample details. Samsung says it’s also improved the stabilization in video mode, but I didn’t have the time to try this out.

I’m a bit torn. On one hand the Note 5’s design is miles ahead of its predecessor aesthetically; it’s beautiful and feels surprisingly great in the hand, despite the slipperiness.

On the other hand, I’m saddened Samsung has dropped any semblance of expandability, more than I was for the S6. The S6 is Samsung’s mainstream device, while the Notes – popular as they may also be – cater to a more niche audience.

It would’ve been nice to see Samsung keep the removable battery and expandable memory on the Note series to cement it as a sort of ‘pro’ line. As it stands, the Note Edge is little more than a larger S6 with a pen.

Not that that’s a bad thing – but it could also be more. Heck, Motorola managed to fit a microSD slot on a device practically the same size.

Still, it doesn’t seem like much of a stretch to say that this will be one of the most powerful and well-designed devices out there when it launches. That’s particularly true given Samsung is wisely getting the leg-up on Apple by launching the devices before Apple’s own event in September.

If the 3,000 mAh battery can keep up with all that power under the hood Samsung may have another winner on its hands.

Pre-orders for the Note 5 are already live; while there isn’t a set MSRP and carrier pricing may vary, AT&T is selling the device for $740 unlocked, so you can expect other carriers to price their devices similarly. The device will arrive in stores on August 21.

Read next: Adventure Time creator is tweeting drawings about VR and you could take part