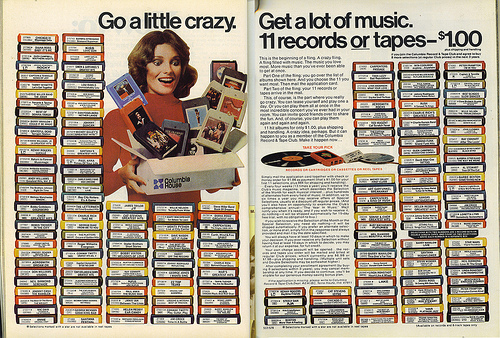 Back when we used to watch TV in real time, we’ve all flipped through channels and landed on one of those informercials with a long scrolling list of songs. They’re usually some sort of greatest hits compilation, an era-specific CD or the next edition of ‘Kidz Bop.’ All this jam for just one low payment!

One such service, Columbia House, used to be one of the top sellers when it came to CD mail orders. Today, its parent company Filmed Entertainment Inc. has filed for bankruptcy after nearly two decades of declining revenue.

Columbia House’s business model was precedent to the likes of today’s streaming services. For one monthly price, you’d get music CDs and tapes curated and sent until you unsubscribed. This model, called negative option billing, was also put under the scrutiny of the FTC, causing a lawsuit in 2009 that caused Columbia and other companies to cease these kinds of services.

This type of service may not have a place in the modern era, but it was a huge success for its time. In 1996, it grossed about $1.4 billion, which admittedly pales in comparison to what modern entertainment companies make. Netflix, for example, grossed $6.11 billion in Q3 of this year, while Columbia House, under its new DVD delivery service, grossed a measly $14 million all year in 2014.