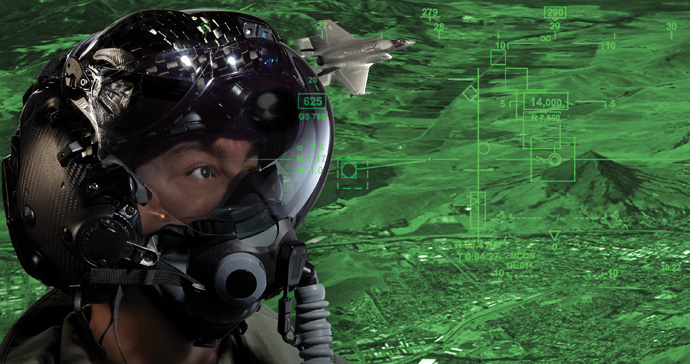 When you spend $400 on a motorcycle helmet, you have certain expectations about quality and safety. But what should you expect when your helmet costs $400,000? Well, if you expected it to be magically able to see through walls, you’d be right. It won’t actually give you Superman’s X-Ray vision, but it’s pretty close.

This “super-helmet” is actually the F-35 Gen III Helmet Mounted Display System (HMDS) and it was created to work in synch with one of the most complex weapons systems ever created: the F-35 Lightning II.

Different versions of the Lockheed Martin-built fighter jet are designed to land on aircraft carriers or even land vertically. When you build the most impressive (and most expensive) fighter jet in history you need an equally advanced helmet for the pilot, and that technology doesn’t come cheap. The cost of each individual helmet is estimated to be more than $400,000.

Rockwell Collins was subcontracted to build the helmet, which in addition to projecting on the visor critical data, such as altitude, airspeed, targeting, heading, and warnings, also allows the pilot to see what lies beyond the exterior shell of the plane. How does it do this?

The helmet projects live video feeds from various cameras mounted around the aircraft via Northrop Grumman’s electro-optical Distributed Aperture System (DAS).  Depending on which direction the pilot turns his or her head, the relevant images are displayed on their helmet visor.

They are literally seeing what is surrounding their aircraft in real time, providing unprecedented situational awareness. If the pilots look down, they see the ground below them. If they look back, they will see the sky behind them.

“When the helmet’s tuned correctly to the pilot’s eyes, you almost step into this other world where all this information comes in,” said Al Norman, an F-35 test pilot for Lockheed Martin. “You can look though the jet’s eyeballs to see the world as the jet sees the world.”

Some of the interesting features of the helmet include:

In the video below, F-35 test pilot Billie Flynn describes the advantages of the F-35′s Helmet Mounted Display.

The impressive DAS technology is proving to have many uses, even beyond combat applications. The Navy’s Silent Watch system uses a similar process to accomplish many tasks, from navigating highly trafficked waterways, to looking out for modern-day pirates, to detecting a man overboard, features that could benefit civilian ships as well.

In fact, tank commanders, too, may soon find themselves outfitted with similar systems for enhanced situational awareness.

Read Next: Rise of the ambulance drones

Read next: How hackathons improve productivity