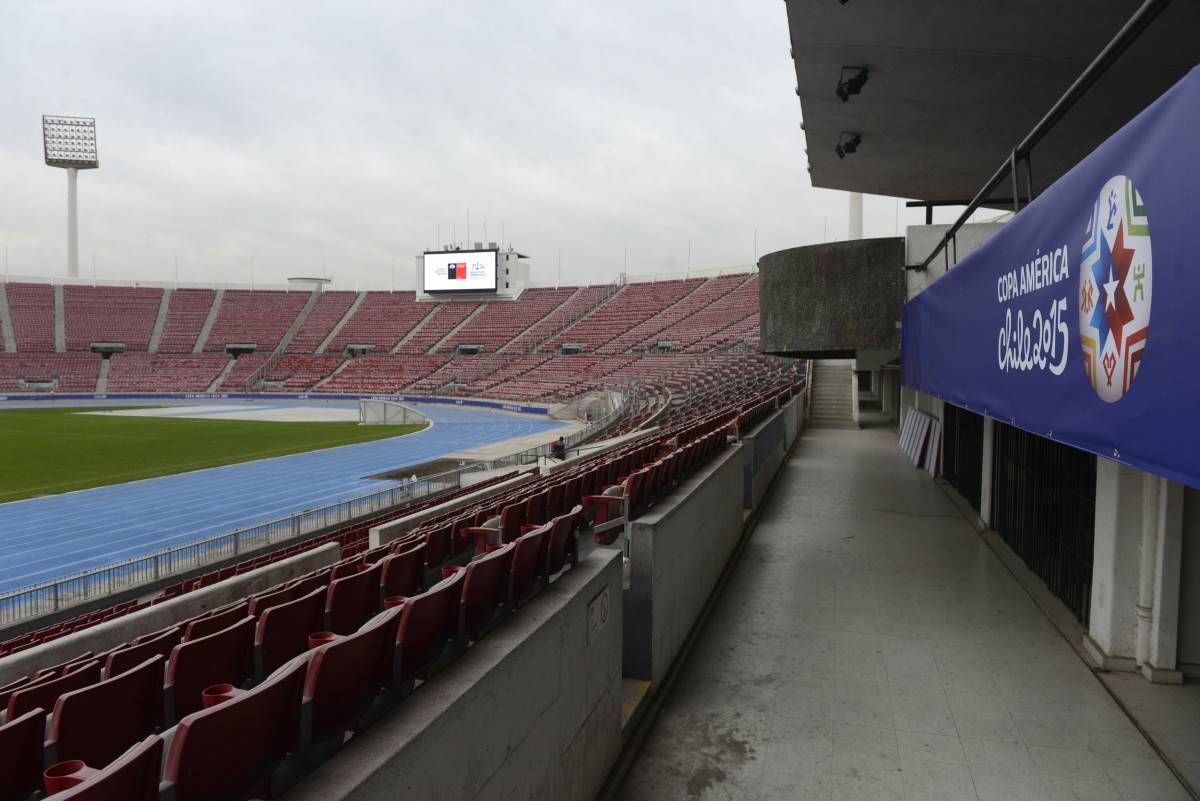 June was a fairly eventful month for Latin America, and not just because of soccer tournament Copa America, although tech companies used it to engage with their users.

For instance, Google made special doodles to celebrate its main highlights, on which fans could keep score with a simple “Okay, Google” voice command, while ridesharing app Yeba.me launched a dedicated page to help them travel from game to game across Chile.

In other tech-related news, some major funding rounds were officially closed, while some interesting new projects were launched. Here’s a roundup of announcements you should know about:

Venezuela and Peru are two of the handful of countries where Facebook Messenger no longer requires a Facebook account. All it takes for new users to sign up is a full name and phone number. In addition, Facebook also released a lightweight Android app called Facebook Lite, which is targeted at emerging markets. While it first rolled out in Asia, it is coming to Latin America and other markets in the near future.

With a similar concern for slow mobile Internet connections, Google announced that it would soon bring to Brazil an experiment it has been conducting in Indonesia. “If you are in Brazil, using an Android phone and a slow mobile network, you will notice that the pages you access from our search result pages will start loading much faster — and using far less data,” two of its employees wrote on its blog (translation ours).

Google also announced $1 million in funding for computer science research in Latin America over the next two to three years. It will fuel the expansion of the Google Research Awards Latin America initiative, which had been rolled out as a pilot program in Brazil as part of Google’s global bet on research. The grants will now be available to full-time faculty members from Argentina, Brazil, Chile, Colombia and Mexico focusing on a series of pre-approved research fields, such as IoT and mapping. Applications are open until July 6, 2015.

Google also made improvements to its maps in Latin America. On one hand, Argentina, Chile, Colombia are among the countries where it rolled out Ground Truth, which brings them better base maps. On the other hand, Google Maps is about to include cycling directions for the Brazilian cities of Rio de Janeiro, São Paulo, Belo Horizonte and Curitiba, celebrated with a bike ride in Rio de Janeiro on July 2.

As for rival service Apple Maps, its updated version for iOS 9 will offer transit directions in various large cities including Mexico City, with other cities and regions to be added later.

Two acquisitions occurred on Argentina’s tech scene, PulsoSocial reported. Postcron was bought by fellow Argentine startup SocialTools, and Sparkflow by US digital advertising company company Undertone. Postcron is a Rockstart Accelerator alum that helps users manage their social media posts, and will now join forces with a 500 Startups and Wayra alum, while Sparkflow focuses on rich media advertising, and had previously raised funding from NXTP Labs and Cygnus VC (disclosure: NXTP Labs is an investor in my startup, MonoLibre).

As for Mexican online classifieds platform Anumex, it was acquired by Schibsted Media Group, which will combine it with its own competing site, Segundamano.mx. According to Schibsted, Anumex is a market leader in some of the 31 Mexican federal states, and had been owned by its founders and financial investors until its acquisition. The deal’s value wasn’t disclosed.

…and more got funded

Movile and Just Eat announced a $50 million investment in their co-owned food delivery service iFood. As we reported last September, Just Eat’s RestauranteWeb and iFood had formed a joint venture owned 50.02 percent by Movile. While UK-based Just Eat participated in this new round, it was led by Movile, which reinforced its position as a majority shareholder, thanks in part to the $40 million round the group itself raised last April. It now expects iFood to double its restaurant base to 10,000 options, expand to 48 additional cities across Brazil and further increase the share of mobile orders, which already rose from 7 percent to 60 percent within the last year.

Language learning service Duolingo raised a $45 million Series D round led by Google Capital at a $470 million valuation, TechCrunch reported. On its Facebook page, the company also announced a partnership with Colombia’s education ministry to teach and certify the English level of participants in the official “40K First Jobs” program.

Brazil-based fintech startup Nubank raised $30 million in a new funding round led by Tiger Global Management, DealBook reported. As you may remember, it was founded by the former head of Sequoia Capital’s defunct office in Brazil, David Velez. Sequoia took part in this new round with a follow-on investment, alongside previous backer Kaszek Ventures and QED Investors. According to TechCrunch, the company is looking at launching more savings and credit products to expand beyond its initial offering, which consists of a Platinum MasterCard that users can manage from their smartphone.

Brazilian beauty e-commerce company BelezaNaWeb also raised a $30 million round, this time from an undisclosed New York City private equity firm. This brings its total funding to $45 million, based on expectations that online cosmetics sales will account for a growing share of Brazil’s huge beauty market.

Local services marketplace GetNinjas raised a R$40 million funding round ($12.8 million USD). According to Exame, it was led by Tiger Global with participation from Monashees Capital and Kaszek Ventures. As you may remember, GetNinjas was elected as Brazil’s startup of the year in 2012 as part of TNW Startup Awards.

Photo and video branding startup Olapic raised a $15 million Series B round, Novobrief and Bizjournals reported. In the words of Bizjournals, Olapic “offers a visual marketing engine to take photos and videos taken by consumers and turn them into brand assets.” While it is headquartered in New York City, its three founders are Spanish and it has development-focused offices in Cordoba, Argentina. The round was led by Felix Capital, which is based in London, where Olapic also has an office. Unilever Ventures, Fung Capital, Longworth Venture Partners, Michael Lazerow, Fabrice Grinda and Jose Marin Investments also participated.

Brazilian edtech startup Descomplica received a $7 million investment, Startupi reported. The round was led by Amadeus Capital Partners, with follow-on participation from previous backers such as Social+Capital Partnership and Grupo Valor Capital.

Online security startup Auth0 raised a Series A round of $6.875 million led by Bessemer Venture Partners, with participation by K9 Ventures and others. In a press release, the company said that it would use the funding to “support the high subscriber growth of its identity-as-a-service platform for developers, specifically focusing on expanding its marketing and customer success staff and developing additional product features.” This new round follows the $2.4 million in seed funding it had raised last year from Bessemer Venture Partners, K9 Ventures, Portland Seed Fund, NXTP Labs and individual investors.  While it is headquartered in Bellevue, WA, USA, it has ties to Argentina, from where many of its team members hail.

B2B order management service Meus Pedidos received an undisclosed amount of funding from Monashees Capital and Qualcomm Ventures. It is based in the Southern Brazilian city of Joinville and previously participated in Sebrae Santa Catarina’s training program Startup SC.

Start-Up Chile launched The S Factory, a pre-accelerator specifically for women that are starting and leading a startup for the first time.  Selected startups will receive 10 million Chilean pesos (about $16,000 USD) in equity-free funding, as well as courses, mentorship and pitch training. Like with Start-Up Chile’s main program, founders from outside of Chile are welcome to apply and will be granted a one-year working visa to come to Chile.

VoiceBunny’s parent company Bunny Inc expanded beyond voice acting by creating ArticleBunny, a content marketing marketplace that connects companies with bloggers. Its official launch took place on Product Hunt, a bet that paid off, according to chief growth officer Jun Loayza: “In a span of two days, we drove over 5,000 highly targeted site visitors and over 100 projects posted,” he wrote in a blog post.

Another project with Latin American roots is making noise on Product Hunt: Roomino, which helps teams manage their travel plans without leaving their favorite collaboration tool, A.K.A. Slack. Led by the former founding team of travel startup LastRoom, it is part of a growing numbers of startups that are built on top of Slack. However, it also has bigger ambitions: “Someday, I’ll be an amazing API which will unify the fragmented scenario of travel services, getting data from them and synchronizing all this information in one place,” the company explained in a Medium post in the voice of its mascot.

Paris-based HiMedia Group and Miami-based Orange Advertising Americas’ former CEO Giuliano Stiglitz announced the creation of Latam Digital Ventures, a holding of adtech companies targeted at the Latin American region and the Hispanic US market. Its first move was to acquire Orange Advertising Americas, whose assets will be used to build its first portfolio company, Primia.Digital. “In addition to Primia.Digital, we plan to launch two more companies this year,” Stiglitz said.

WordPress’s parent company Automattic is giving its blogging service an online marketing push in Brazil. According to online influencer Edney Souza, who will be a weekly contributor to its new official blog in Brazilian Portuguese, this is the beginning of a series of initiatives aimed at Brazilian users, which also includes the launch of a new Facebook page.

Read next: Hands-on with Parrot's newest range of minidrones designed for air, land and water