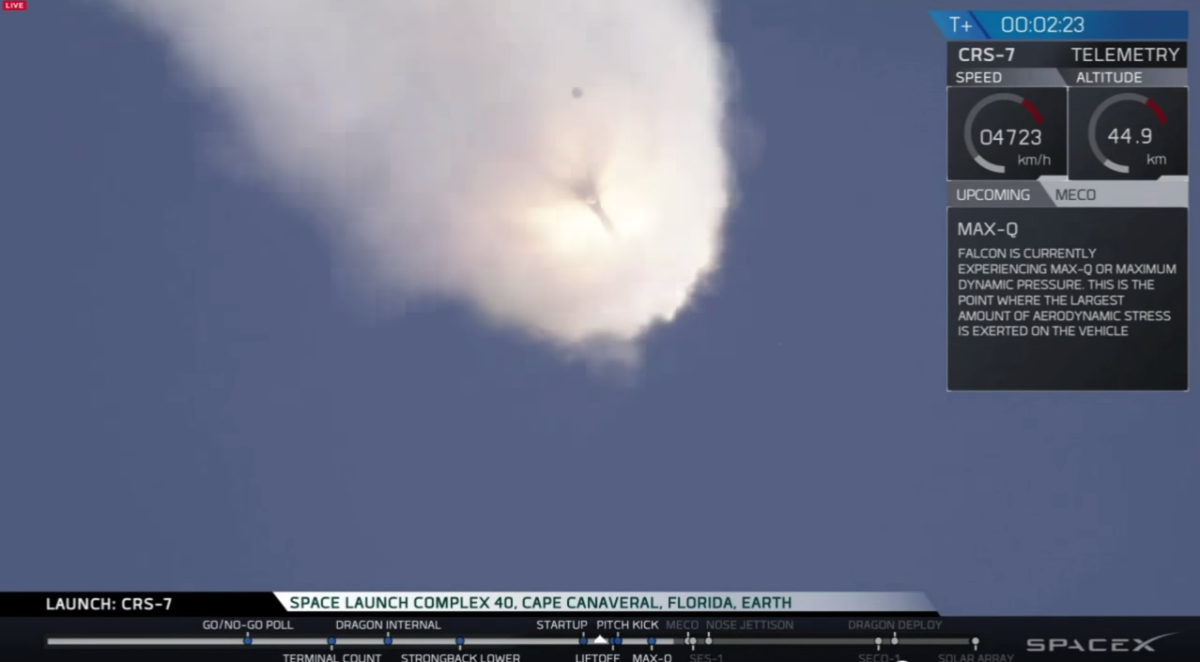 SpaceX just had another unfortunate failure: its Falcon 9 rocket headed towards the International Space Station (ISS) disintegrated approximately 2 minutes into its launch at 10:21 AM ET from Cape Canaveral, Florida.

Thankfully, nobody was on board, so there are no reported injuries.

The range confirmed that the vehicle has broken up. @SpaceX is putting together their anomaly team. Live updates: http://t.co/KX5g7yYnYG

Although SpaceX has had other failures before, this one is notable for a couple of reasons: it’s the first time a Falcon 9 model has failed at launch (after 18 successful missions), and this time the rocket was carrying 4,000 pounds in cargo for the ISS.

It was also carrying some units of Microsoft’s HoloLens headset for ISS astronauts, where the augmented reality device was to help them complete certain tasks – such as performing equipment repairs with the help of an expert from the ground or instructional animations.

Had the launch and resupply mission gone to plan, the Falcon 9 rocket was to try to land itself on a drone ship in the Atlantic Ocean. It’s a complicated but crucial step in Space X’s goal of creating a reusable rocket, but so far both attempts have ended in failure.

SpaceX’s next reusable rocket trial is scheduled for August 9, though there’s currently no word on whether today’s failure will affect the upcoming flight’s timing.

Update: Here’s a full video of the failed launch. Skip to about 3:17 if you just want to get to the explosion.

CEO Elon Musk also tweeted out to explain the cause of the failure: an overpressurization of one of its oxygen tanks.

That's all we can say with confidence right now. Will have more to say following a thorough fault tree analysis.

CNN reports that SpaceX’s president and chief operating officer, Gwynne Shotwell indicated that subsequent Falcon 9 rocket launches would be suspended until the Federal Aviation Administration signs off on the company’s investigation of the failed launch.

Shotwell believes it will probably take “a number of months”, but perhaps less than a year. Three payloads are scheduled for Falcon 9 launches soon, including the Jason 3 ocean-observing satellite and the SES 9 and Orbcomm OG2 telecom satellites.

Read next: OneWeb strikes a $500 million deal to provide internet globally via satellite

Read next: How much am I worth as a freelancer?