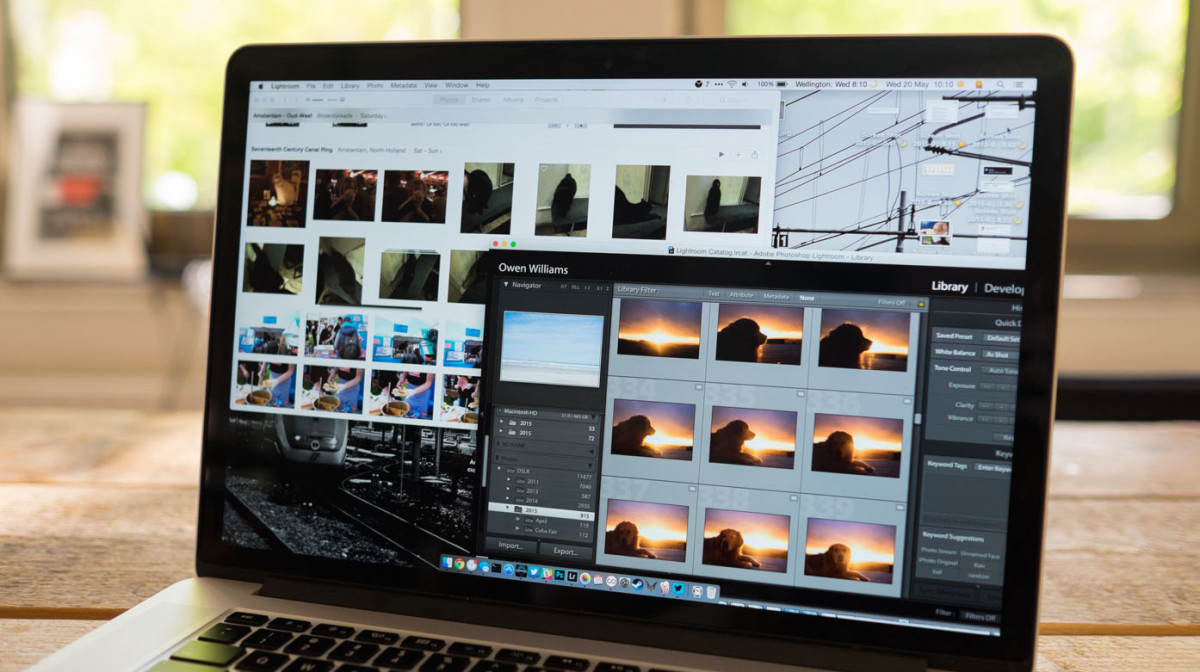 This year is the year of the cloud-based photo library, with Apple, Google and Facebook all now pushing to be the place you choose as home for your photos.

Now that there are so many great places to keep your photos safe, it was about time to compare them and look at where the best place to put your precious shots.

Google launched its new photo service to much fanfare at its developer conference, Google I/O.

Google Photos will backup an ‘unlimited’ amount of images for free, provided you don’t mind them being downsized to 16 megapixels. If you do, you can pay for storage starting at $10 per month for 1TB and it will store uncompressed and RAW files.

Its standout feature is a powerful search feature that makes finding photos easy. Enter “pizza” or “blue” and it reliably shows related images.

My favorite feature, ‘assistant,’ digs up your shots at random and turns them into GIFs, adds filters or creates stories about trips you took. It’s a great way of surfacing photos you haven’t seen in a long time to make you browse your library occasionally.

Google Photos has Windows/Mac apps for uploading your photos and iOS/Android apps for both backing up and browsing photos.

I do have concerns about what Google’s ultimate goal is with taking my photos for free, and if a service that I’m not paying for is eventually going to be monetized via advertising, however the features it offers are a cut above the competition.

For the low price of free, with unlimited photo backup, well designed apps and interesting ways of re-discovering your photo library, Google Photos is a great option for most people.

The first company to offer a sizable amount of cloud photo storage, Flickr offers 1TB to users for no charge.

Flickr started as a home for professional photographers, but over the last two years moved to offer backups of your photos from any device.

The company offers well-designed iOS and Android apps for automatically backing up your photos from your phone. They’re also great for managing and editing your photos.

Flickr’s mobile apps feature number of editing options, so you can tweak photo exposure, contrast, brightness and other settings. It also offers a number of Instagram-esque filters you can add to your shots.

Like Google, Flickr uses machine learning to deduce what’s in your photos. That means you can search for “cat” and you should get pictures of cats back, however Flickr’s version has come under fire for mislabeling things.

Released in late 2014, iCloud Photo Library is Apple’s way of keeping your photos in sync across devices, provided you own its hardware.

The free version only gives you a measly 5GB of storage, shared across iCloud. After that you’ll need to pay for extra, starting at $0.99 per month for 20GB.

iCloud Photo Library’s best feature is that it’s aware of how much space it’s taking on your iPhone, iPad or Mac and automatically tidies up older photos to save space, while still making them accessible if you want to view them. It keeps everything in sync in full resolution, with very little hassle.

There’s also a desktop app for you Mac called ‘Photos.’ It allows you to browse your library, organize shots and back everything up.

It’s the best cloud-connected option I’ve found for organizing photos as it’s fast, easy to use and keeps all the changes in sync with your phone.

I love the ability to cram my huge amounts of photos from my other cameras into iCloud Photo Library and get them synced with my phone without them actually taking up space on the device. Being able to scroll through years of shots right on the go is incredibly useful.

If you’re using mostly Apple devices, iCloud Photo Library is likely your best option. It doesn’t match any of Google Photos’ nifty discovery features, but it’s a solid way to keep your image library backed up.

The newest app on the block, Facebook Moments is the social network’s attempt to get you to share your photos there instead, but it’s a very different spin on storing your shots.

Facebook Moments is a way to “get all the photos of yourself trapped on your friends’ phones” and uses facial recognition to automatically recognize the people in your camera rolls.

The app automatically recognizes photos of your friends. It then syncs them to the friends it detects, with your permission

From there, it automatically builds a collection of photo albums of you and your tagged friends. It’s a little creepy, but the idea of being able to get all the photos that everyone else took of you onto your own phone is cool.

You can use Moments to back up your photos — it doesn’t keep track of how many images are stored in your account — but they also aren’t saved at full quality, nor is that the primary reason the app exists.

I didn’t spend long testing Moments, as few of my friends were using it, but if you’ve got a number of people you know onboard it could be a powerful option.

If you’re an Amazon Prime subscriber, you might not have know that you also get free, unlimited photo storage.

Amazon Photos has been around for a while but removed its storage limits late last year for Prime members. It doesn’t impose any file limits or downsizing on your photos, so you can guarantee they won’t be compressed in any way.

You can view photos in a timeline style format, share them to social media or simply use it for backups. There are apps available for iOS, Android, Windows and Mac, along with a Web interface for browsing your library.

It’s fairly simple, but a solid choice if you’re already a Prime subscriber and don’t want to pay for extra storage somewhere else.

If you want a no-frills way to back up photos from your phone, Dropbox’s Carousel app is a set and forget option.

It uses your Dropbox account as storage, which is free up to 2GB and costs $9 per month for 1TB of storage.

One handy feature is that Carousel detects screenshots and removes them from your photo stream.

The app is available for both iOS and Android devices. Photos are synced back to your other computers that use Dropbox too. However there’s no desktop app available for browsing them.

There aren’t many extra features, but if you’re already using Dropbox and have the spare space, Carousel is a good option to make sure your photos are backed up somewhere else.

Eye-Fi tries to improve the workflow of serious photographers and synchronizes your images across devices.

The company’s cloud offering is great, but to get the most of it you’ll need to buy one of the company’s wireless SD cards. The card, once in your camera synchronizes your photos to your phone or computer whenever you’re within Wi-Fi range.

Its cloud service, which costs $49 per year (free for the first year with a card), synchronizes all your photos in full resolution (including RAW images) without any limitations on storage space.

You’re also able to synchronize shots from your iPhone or Android device’s camera roll and upload photos from your computer. The wireless card isn’t required to use Eye-Fi’s service, but rounds out the company’s service and makes it more compelling.

There’s no desktop app for browsing your library but Eye-Fi’s Web interface presents photos in an attractive way with some interesting features for discovering photos. You can browse your library by device or drill down into the most common settings, like what ISO or f-stop you usually use.

There are iOS and Android apps for browsing your library on the go, which act as a staging synchronizing point for your card if it’s nearby. As you use your camera, it is backing up your photos as you shoot them, so even if you lose it, you have a copy.

I like Eye-Fi’s service because it’s an easy way to back up both my DSLR and iPhone photos in one place.

Not sold on the idea of giving your photos away to someone else to look after? We have good news — you can roll your own solution, but it’ll cost you.

There are a number of ways to build your own “private cloud” for backing up your photos and we’ve got a comprehensive guide to the alternatives, right here.

Read next: The 18 best blogging and publishing platforms on the internet today