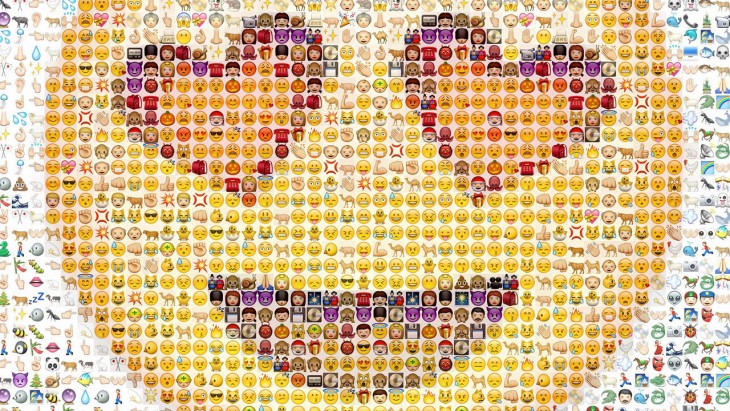 I have a confession to make: I’m a grown woman who peppers pretty much every text and social media post I send with smileys, hearts, stars and various other decorations.

Emojis have taken over my communication—and I’m far from alone. According to Swyft Media, 74 percent of people in the U.S. regularly use stickers, emoticons or emojis in their online communication, sending an average of 96 emojis or stickers per day.

All this adds up to a total of six billion emoticons or stickers flying around the world every day on mobile messaging apps.

In a recent post, I had a lot of fun learning about the psychology of emoticons and chronicling a few reasons to use emoticons in your writing and social media.

As emojis grow more and more popular with social media users and marketers, they’re a phenomenon all their own. Here’s a look at what emojis trigger in us, how they’re changing our language and how to try using emojis in your social media and marketing.

The psychology of emojis

Though we go through life mostly unaware of it, humans mimic each others expressions and emotions when we’re talking in person. This emotional contagion is a big part of how we show empathy and build relationships.

But online, we’re missing that crucial element of empathy and emotion. Or, we were—until emoticons and emojis.

Scientists have discovered that when we look at a smiley face online, the same parts of the brain are activated as when we look at a real human face. Our mood changes, and we might even alter our facial expressions to match the emotion of the emoticon.

What’s really interesting is that this is not something we’re born with as babies. It’s something our brains have developed in the last few years with the emergence of emoticons and emojis. Essentially, social media culture has created a new brain pattern within us.

Both emoticons and emojis are recognized and processed by the brain as nonverbal information, which mean we read them as emotional communication, not words.

And emotional communication can just as important as words in conveying a message clearly. For example, in spoken communication, researchers now know that if speakers aren’t allowed to use gestures, they becomes less fluent.

Essentially, emojis are doing what the tone of voice does on the telephone and what expressions and gestures do in face-to-face communication.

There’s even evidence that emojis are actually shifting our vocabulary.Instagram discovered that as emoji use goes up, Internet slang like “rofl,” “bae,” etc., goes down as users choose their emoji counterparts instead.

On Instagram, emoji are becoming a near-universal method of expression—Instagram reports that nearly 50 percent of all captions and comments on Instagram now have an emoji or two.

The app recently added the ability to use emoji as hashtags, opening up the first chance to gather real data on how people use emojis and what they use them to signify.

These are the some of most popular emoji hashtags on Instagram, along with the words used alongside them in captions or comments:

It’s clear from the top emojis that Instagram is where we go to laugh, encourage, be inspired and share beautiful images.

In another Instagram emoji study, faces account for six of the top ten, pointing toward the idea that people are using emoji to convey something that text alone can lack: emotion. It’s no surprise that the hearts and hand gestures round out the top 10.

As for who’s using them, emoji use varies quite a bit from country to country but is steadily on the rise pretty much everywhere:

Now that we know how emojis work within us emotionally and psychologically, let’s take a look at how brands have been using them to show more fun and personality. Here’s a look at five cool emoji marketing examples.

GE has created a full emoji table of experiments, with a cool science fact or video that corresponds to each symbol.

PETA created a quick but cutting emoji-focused video campaign that tapped into the emotions that emoji can trigger.

CNN has created emojis for all the 2016 U.S. presidential election contenders, so you can tweet, text and more with your favorite candidate’s visage.

In fact, creating brand-specific emojis has been a choice of quite a few companies including Burger King, Mentos, Ikea and more.

Swyft Media co-founder Evan Wray, interviewed at AdWeek,  said make-your-own emoji campaigns can work for some brands because they don’t really feel like marketing at all.

“When we offer mobile app users the imagery of their favorite brands, they don’t see it as advertising. They see it as self-expression.”

Normally I might feel a tiny bit skeptical about this assessment, but I am an avid user of Comedy Central’s “Broad City” emoji keyboard for these exact reasons.

A smaller-scale way to incorporate emojis could be to follow the example of Bud Light, who posted an American flag emoji tweet last American Independence Day that got more than 150,000 retweets and more than 112,000 favorites.

3 basic tips for incorporating emojis into your marketing

Before we go emoji crazy, it might be handy to get an understanding of what some of the most common emojis mean and the situations in which they’re used.

Some are a bit more obscure than others, as Instagram shows with its breakdown of words that tend to accompany various colors of hearts:

Genius has a full, annotated list of each emoji by its official description (i.e., Face With Stuck-Out Tongue And Winking Eye), and Hubspot has a helpful guide to some of the more obscure emoji choices.

2. Know how your audience speaks

That means how people use emojis and what they use them to signify often varies by your age, gender, location and even social class.

In order to know how emojis could fit into your communication, think about your audience and how they speak to one another and to you. Are they quick and to the point, or are they chatty? Do they use slang or any distinct vernacular? Having a detailed set of personas can be really helpful here!

3. Know how emojis fit your voice and tone

We all want authentic communication from those we speak to both online and off.

Defining your social media voice and tone—then staying true to it no matter what communication changes come and go—can help keep that authenticity strong.

Once you have that, you can determine where the playfulness and emotion of emoji communication might fit into your existing voice and tone.

Maybe it’s a fun way to chat back-and-forth with your audience on social media. Or you could try adding an emoji to a email subject line—here are the 15 most popular ones from Mailchimp:

If it feels organic to your voice and tone, experiment and see how your community responds. Emoji probably won’t be a perfect fit for all brands, and that’s OK! Some cool, even newer communication method is probably just around the bend.

How are you using emojis?

The creativity of this new form of communication is only limited by our imaginations. I’d love to hear how you’ve used or might be planning on using emojis in your conversations and marketing. Tell me all about it in the comments!

And just for fun, I used Bitmoji, available on iOS and Android, to create my own custom emoji likeness I’ll leave you with. Would love to see yours, too!

Read next: How to make magically transforming Twitter images