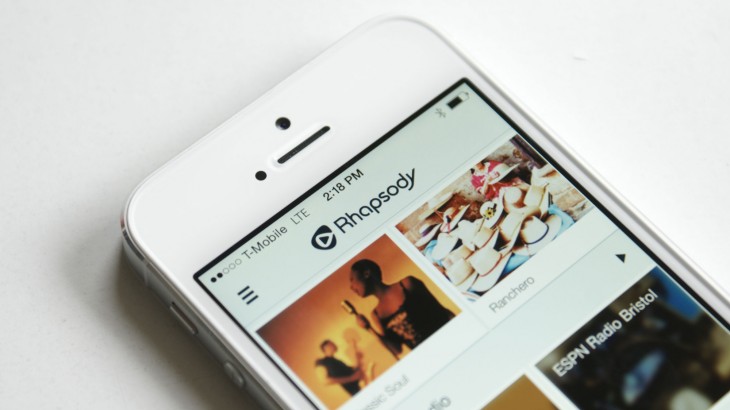 As WWDC approaches, many are looking forward to Apple’s rumored new streaming music service. Some think Apple’s new service will come over the top and quickly dominate the competition.

Rhapsody isn’t worried, though. In fact, the company is happy Apple is entering the streaming music realm.

“We’re really excited” says Rhapsody CFO Ethan Rudin. In fact, Rhapsody is hoping Apple — which could ditch freemium in favor of a paid service — will open our eyes to real value.

I think once you’re forced to go beyond a free experience, that’s when [customers] start to shop around and think about other apps that are out there.

Rhapsody offers two options for music fans — UnRadio at $4.99 per month, or Premier for $9.99 per month. Each comes with a 14-day trial, but there is no freemium offering from Rhapsody.

Apple’s new service is also said to forgo the freemium model others like Spotify offer.

When I asked if Rudin thought an Apple streaming service would affect Rhapsody negatively, he said it would “provide a moment of clarity” for the industry.

To help create foster a more personal connection, Rhapsody recently partnered with BandPage to give fans more info on bands and artists they like, even telling them when those artists are coming to their town.

In the dynamic world of streaming audio, Rhapsody’s pragmatism didn’t always make sense. As freemium became the fashionable way to consume music, Rhapsody held steady with affordably options. “We were methodical in our approach” Rudin says.

When I asked why Rhapsody never did go freemium like Spotify, Rudin said freemium was a short-term win.

While a clever idea, it’s [free streaming] certainly not converting free users to paid subscribers as fast as the record industry would like. Over time, you will see that added value that the record labels are going to allow freemium services to give away will dwindle over time.

Though we’ve only got the word of mysterious insiders to rely on, sources report Apple was interested in a free tier to its new streaming service early on, but pressure from various record labels forced Apple to drop that option. A $7.99 price point was also reportedly on the table, and shelved over concerns from within the music industry as well.

All current indications point to an Apple streaming service that’s a lot more like Rhapsody than Spotify. Apple is even late to the streaming game — a pragmatic page pulled from Rhapsody’s “anti-freemium” playbook.

Apple’s new service may be the watershed moment streaming music needs. While Spotify is convinced its freemium members will someday pay up, Rhapsody is proudly charging all comers.

What Apple ends up doing with its streaming option may dictate momentum for the entire music industry. Again.

Read next: New job posting at Google points to the revival of Glass