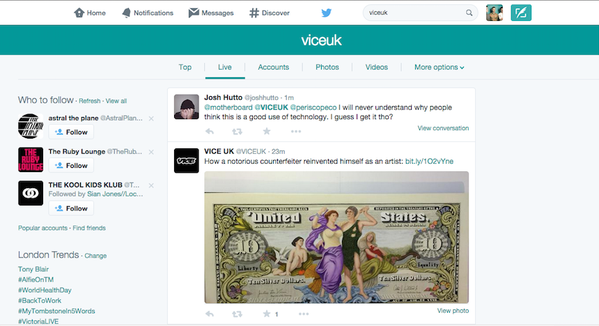 Twitter might be gearing up to change its search layout. Yesterday we spotted some users had noticed strange new UI when searching within Twitter.com. Today WebProNews confirmed Twitter is running a test with the new design.

For reference, here’s what the regular search interface looks like.

Comparing the two interfaces, the new design is simpler and much less cluttered. It reduces the default mess of options on the current layout to just a few tabs covering search categories at the top, while also matching your account’s theme color.

There’s been some renaming too; the ‘Live’ tab also seems to replace the “All” function atop the old search UI, so that you can easily look through tweets in chronological order (the default ‘Top’ view prioritizes trending tweets instead). The ‘People’ option has also been renamed to ‘Accounts.’

If you’re wondering where the options are to limit searches to people you follow or tweets near you, those are now tucked under the ‘More options’ tab, along with saving and embedding searches.

New Twitter search UI rolled out to Safari (not on Chrome yet) is much better. Hope better search results are next. pic.twitter.com/btGT5yQiYi

Twitter routinely runs tests on small subsets of its users, so we can’t say whether the new UI will end up being a permanent fixture. That said, we hope it does – it’s a lot cleaner and appears easier to use without reducing functionality.

Read next: Amazon Echo can now turn appliances on and off thanks to WeMo and Hue integrations