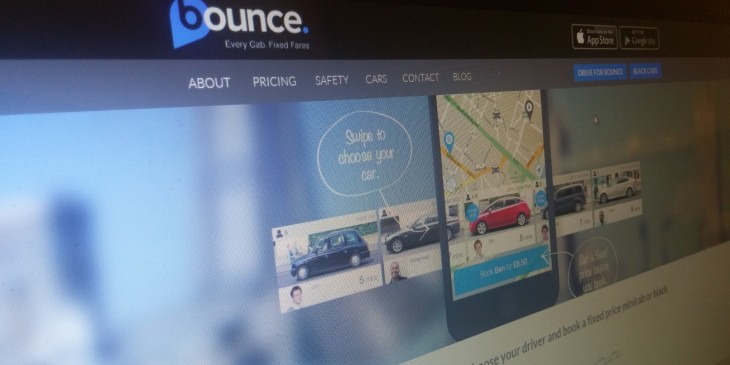 With Uber, GetTaxi, Hailo, UbiCabs, Kabbee, Addison Lee and other services already offering Londoners the option of booking a car in just a few presses, the question of whether the capital needs another taxi booking app is a fair one.

Bounce Cars thinks it does.

Its unique selling point, the company’s spokesperson informed me, is that it’s the first service that allows drivers to set their own rates, and therefore compete for business. It’s also the first that allows London’s iconic black taxis to join and offer fixed-fare rides, rather than going by the meter.

Somewhat dubiously, I agreed to test the service out with in-app credit provided by Bounce.

The Bounce Cars app is available for iOS and Android devices, and rides are automatically charged to your card (once you’ve added your details as part of the set-up process) unless you have credit.

Like many other taxi booking apps, you’re presented with a map of your immediate location and two boxes for you to enter a pick-up point and destination. Enter those and then you can choose between the selection of drivers competing for your fare. Or that’s how it goes in theory.

In reality, the service is so new and small right now that it just can’t fulfill much demand. Not that there is much demand, according to the few drivers I spoke to. Two of the three did also go out of their way to say how supportive the company was to drivers too, though.

I attempted to use Bounce about six or seven times, but only actually got a car on three of those occasions. All successful and failed attempts were made within Central London, or thereabouts.

The drivers and journeys themselves were fine – largely unremarkable, which is also what I’d want most of the time when rushing between things.

Chicken or egg. Drivers or riders.

It’s hard to entice drivers to join your fledgling car-booking platform without a worthwhile volume of customers, and without drivers to fulfill the occasional inquisitive user that does decide to test it out, there’s no way of retaining customers.

Unfortunately, this means that the company’s USP of allowing the drivers to set their own fares can ultimately work against the passenger – with few other cars on the road, what would be the incentive to offer a relatively cheap fare?

In my experience, some journeys were quoted as somewhere between 50 – 100 percent more expensive than rival options. Had it been my money, I wouldn’t have booked a single Bounce car.

The other major problem caused by the shortage of cars is the arrival time. People love Uber or GetTaxi because they know that there’s a good chance of getting a car to your door in just a few minutes – in my testing of bounce, a wait of 12 minutes or more wasn’t uncommon. Perhaps that’s fine for some people, but I wouldn’t wait 12 minutes if I had the option of using a cheaper service in less time.

If you look at the times shown in the screenshots used to illustrate booking a single journey (below then above), while the initial arrival time said 5 minutes and then ten minutes, it actually took pretty much 15 minutes before we got going.

Unfortunately, to finish off a trifecta of complaints, I never saw a single black cab option on the app – literally never, even at times when I wasn’t looking to book a cab but was just checking it out anyway, which negates Bounce’s other USP.

Any other problems I saw looked like growing pains – arrival times are inaccurate and can jump around, and for one journey the only available driver declined my first booking request at his offered price and then would only offer the same job at a higher rate (shown above). Drivers are perfectly within their rights to do this with Bounce, but once a fare is confirmed, the price is locked in.

It’d be easy to write Bounce Cars off as another contender that wanted to muscle in on the London taxi scene, but that hadn’t quite gotten the magic formula right. However, the service has a sound grounding and potential if it can deliver on its promises of competitively priced rides in your own choice of car. It just didn’t for me.

Bounce’s problem is one of scale, and one that many startups – taxi or otherwise – will recognize. How do you entice operators and customers to use your platform and maintain a perfect delivery of service for both parties? It’s a tricky balance, but one where the company perhaps needs to look more closely at its base fare algorithm to allow drivers to price rides more reasonably – without that, customers will never flock to Bounce in volume.

Customer experience has to come first, as most people won’t give new services a second chance if the first impression isn’t good. With shorter arrival times and cheaper fares, I’d consider booking a Bounce car again, but as it stands right now, I’ll probably wait a while first…