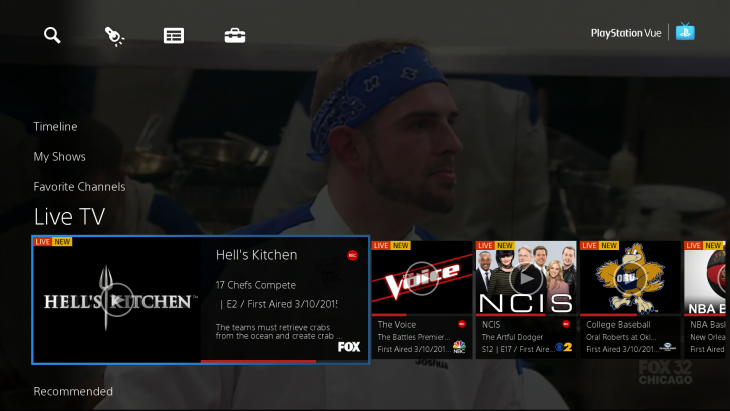 The TV world is evolving at an alarming rate. What began with Netflix streaming videos to your home has become an all-out war between companies and networks ready to stream content into your home while cable and satellite providers try to reverse plateauing and declining user numbers. Now Sony is ready with its own streaming TV service, PlayStaion Vue.

Launching today in New York, Chicago and Philadelphia, PlayStation Vue brings the typical cable TV channel bundles to the PS3 and PS4. Unlike Sling TV and other streaming video offerings, PlayStation Vue is a live TV service with cloud-based DVR and the ability to rewind up to three days on networks.

With the rise of DVRs, on-demand and streaming services like Netflix, viewers are more interested in individual shows than the network those show appears on. The Live TV portion of Vue takes that into consideration, and its UI highlights shows in a line-up grid rather than a list view (although that’s still available if you miss it).

When you’re watching a show you can see what’s coming up and what’s already played. Depending on the licensing, you can got back up to three days on a network to watch a show. If you missed the premier of a hot new TV series and forgot to add it to My Shows (Vue’s version of a TiVo season Pass), you can scroll back in time to watch it.

It take just a single button push on a PlayStation controller to add a series to My Shows. Your selections are saved in the cloud for up to 28 days, so there’s no need to worry about filling up your DVR.

During a demo, the system seemed easy to navigate with the PlayStation controller. Sony did say that it would work with PlayStation remotes, but stressed that it had optimized the experience for the controller.

The search functionality surfaced popular shows while spelling out a title. Even More impressive was the Explore feature’s ability to find content by type, genre, length, age appropriateness and other sections. If you’re stuck wondering what to watch, it’s a quick way to see what’s hot within a given time frame and your mood.

However, missing Disney-owned ABC and ESPN could result in sports fanatics and fans of the house-of-mouse not signing up — especially when the bundle prices don’t differ that much from what their local pay-TV operator already offers. In some cases, operators’ deals for a year-long contract might even be cheaper.

While the cost may not differ much from traditional offerings, it also doesn’t require viewers to sign a contract. You can sign up for a month, cancel and sign up again a few months later. More importantly, it offers an alternative in a market that’s long been regional monopoly in some areas.

While satellite TV has offered an alternative to regions where there’s only a single cable provider, the actual satellite dish might not make your landlord happy if you live in an apartment.

Sony’s PlayStation Vue needs a minimum 5Mbps connection to bring TV into homes that have a PS3 or PS4. No need for an additional cable box or the charges that viewers may incur when they want to add DVR functionality. Plus, if you’ve ever had a cable subscription you know that eventually your bill will creep up without your provider telling you. Sony and other streaming services are in the spotlight and any change they make will result in news.

Is Sony’s Vue the magical streaming TV service we’ve been waiting for? Not really. But that service where you get to pick and choose your networks and pay less than your cable doesn’t exist and probably never will. Major content creators like Disney still want to bundle all their channels together to sell to TV distributors like Comcast and now Sony. They’re not going to change their business model if it’s making them money.

However, PlayStation Vue is a solid alternative to traditional pay-TV.  It’ll be much better if it can get ABC and ESPN. But unlike other streaming options, it actually has live and local TV and in markets where there’s only one pay traditional pay-TV provider, it could create incentive for that provider to compete on price so it doesn’t lose customers. Competition is good. Competition can save you money.

Sony says that PlayStation Vue will be rolling out to other large cities later this year and plans to roll the service to as many markets as possible in the future. An iPad version of the service is in the works. We’ll have a full review of the service in the coming weeks.

Read next: Get on a conference call in seconds by copying in this email address