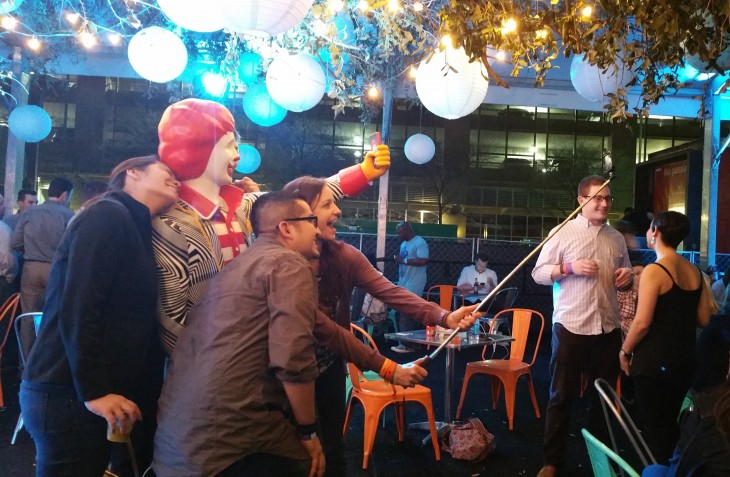 It didn’t take much for the first SXSW poster to stop me in my tracks and reroute my entire day’s journey to accommodate the advertised event. That’s because this past weekend in downtown Austin, packs of Saint Bernards were roaming about, accompanied by battery packs to help charge attendees’ dying cellphone batteries.

Everyone wanted to a piece of them. Despite the myriad of lounges with free chargers and air-conditioning, people were purposely letting their phones die for a chance to meet these dogs in real life.

Unable to kill my battery that quickly, I stopped by the epicenter of where the poster said the dogs will be. Shortly after playing with the 10-week-old pups, I realized I was 10 minutes late for the tech panel I’d originally been walking toward.

There have been talks for years about how SXSW is “over” – that the festival is no longer about big ideas and innovation but rather which brands can out-gimmick others. But looking around the lot full of people cuddling up with the oversized critters, it was clear that people didn’t really care.

Raining cats and dogs in Austin

The Saint Bernards weren’t the only animal-centric marketing ploy that took place this year. You can even adopt puppies and take them home as your Austin parting gift, if you were at Bar 96 on Saturday between noon to 6 p.m.

It is puppies central up in Austin right now #SXSW

For those more into the feline family of friends, you could find all the “famous” ones in attendance: Grumpy Cat, Lil Bub, Nala – to name a few. On media preview night at the Haus of Bacon, crowds flocked toward Grumpy Cat for selfies, completely ignoring the other cats sitting just across the room.

Next to Grumpy was a portrait of her majesty, made mostly out of bacon. If it wasn’t for the open bar in the back of the space, everyone would have missed the glass case filled with a new line of canned cat food – the core reason this event even took place.

And it’s not just brands – SXSW has even gotten in on appropriating animals as means of marketing. Pet-related panels this year include “GIS Mapping: Using Technology to Save the Lives of Dogs and Cats,” “VodkaforDogPeople: Matchmaking a Business Heart” and “CAT”astrophe: Good, Bad and Ugly of Internet Cats.”

By now you may have noticed I never mentioned the brands behind the smartphone-rescuing Saint Bernards or cat-tastic church of bacon. That’s because it doesn’t really matter (it’s Mophie and Friskies, respectively.)

Although SXSW estimates that more than 30,000 badge holders will attend SXSW Interactive, just about 300 or so of those folks remembered to hashtag #mophierescue in their Instagrams. Of the hundreds of tweets asking to meet the Mophie rescue dogs, only a handful walked away with a Mophie case.

SXSW isn’t exactly about promoting a product, it’s about companies engaging with potential customers by any means necessary – even if they don’t remember your brand once they board their planes home.

That’s the essence of why long-time SXSW attendees are complaining about the shift. These viral gimmicks are stealing the attention away from the next big tech disruptions.

In 2013, the notoriously defunct Bang With Friends launched via guerrilla marketing, with posters all over Austin encouraging Facebook users to use the app to find some fuck buddies. The posters were marked for removal shortly after, and the app got itself banned from the festival. Controversial? Sure. So classically SXSW? Absolutely.

As more brands infiltrate the-conference-formerly-known-as-geek-spring break, larger and unlikely companies also find themselves at the center of downtown Austin. Among them are TD Bank and 7-Eleven (they’ve turned the convenience store into a bill pay center), Swarovski (now that fashion tech is in full swing) and McDonald’s (because there are not enough greasy eats in Texas).

McDonald’s was one of the more controversial brands to appear at SXSW. News broke weeks prior to the festival and it wouldn’t pay its live musical acts (then reverted the decision), and gave away free fries and sandwiches at its giant open-air lot. It’s all pretty anti-Austin – and although the fries were tasty, we still saw much larger lines at local food trucks elsewhere.

Mr. Ronald McDonald himself even hosted an invite-only event on Saturday night, armed with a stance all millennials have come to perfect: the selfie pose.

Meanwhile, this month’s hottest app Meerkat just got cut off from Twitter’s social graph and hardly anyone gave a hoot. It was more likely that they saw a Hootsuite party bike roll down East 5th than Google’s announcement of an upcoming open Google Now API. Priorities.

But there’s still hope for an authentic SXSW experience, if you’re willing to abstain from the cute puppies for just a moment. Panels like DARPA’s thirst for innovation and how Google is aiding Native American’s cultural preservation remind us that geek spring break isn’t all about beers, tacos and memes.

Still, you can’t fault SXSW for its evolution. Like tech, all things must adapt to fit the needs and interests of our current society – and that need is social media affirmation in the forms of Likes and retweets.

Maybe instead of considering SXSW as a place where startups are born, we should think of it as where creative agencies find their big breaks.

Let’s face it: even if you do remember the brands behind your favorite gimmick at SXSW, we never see much credit given to those behind those projects. If you got yourself an awesome Game of Thrones-style selfie this weekend, that’s great. But did you really think HBO had the tech capacity to suddenly create motion-sensor swords?

Social innovation may just be hiding in plain sight if you can see beyond the kitties and flashy photo booths. And maybe that’s what this event will redefine the next year it bills SXSWi as a thought-provoking space for “emerging technology.”