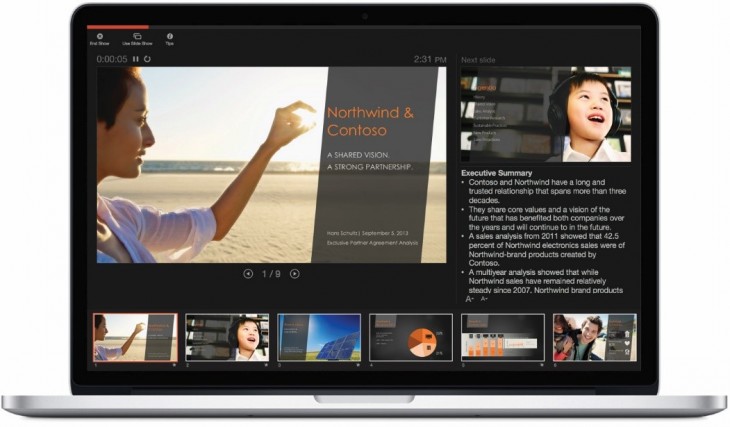 Microsoft’s Office team has been on a roll. In the few past months, it’s been busy creating the upcoming Office 2016 for Windows, as well as new universal apps for Windows 10 that work on mobile devices just as well as the desktop. It turns out Mac users, however, will be the first to see what the team has up its sleeve this year.

Microsoft has just released a preview of Office 2016 for Mac, which includes updated versions of Word, Excel PowerPoint, OneNote and Outlook. All of these are now optimized for retina displays, support full-screen views and have revamped ribbon interfaces.

As you’d expect, they’re also connected to the cloud for accessing your files anywhere. Curiously, there’s only support for Microsoft services at the moment: OneDrive, OneDrive for Business and SharePoint.

Microsoft announced a partnership with Dropbox on its mobile Office apps last month, and recently began adding support for other platforms too, so we wouldn’t be surprised if these made their way into Office for Mac by the time the full product is released.

Of course, there are a ton of new app-specific features as well.

Word’s design tab helps manage layouts, colors and fonts throughout a document, while a navigation pane similar to the one in PowerPoint makes it easy to find the pages you’re looking for. Comments are now threaded too, which should make editing sessions a lot less of a pain.

Excel features improvements to charts, graphs, keyboard shortcuts and data entry, including a formula builder and autocomplete. New functions added in Excel 2013 for Windows helps make the app more powerful, while assuring your calculations will work across platforms.

PowerPoint is introducing a nifty ‘Presenter View’ feature, which basically works as a hub only the speaker can see; it can display your next slides, a timer and notes, while your audience only sees the current slide. There’s also a new animation pane and slide transitions to add some pizzazz.

The new Outlook is basically an update to what Microsoft introduced back in October, which isn’t a bad thing. There’s an improved conversation view that automatically threads your conversations, and message previews now show you the first sentence of an email in addition to the subject line.

Finally, Microsoft has also been pushing out updates to OneNote recently, all of which are included in Office 2016. You can now organize your notes more effectively with tags, and use optical character recognition (OCR) to parse text from images and handwriting.

Although Microsoft pushes out small updates to its Office for Mac intermittently, the last time the apps saw a full revamp was 2011. There isn’t an exact launch date for the final version of the productivity suite, but the company says to expect it sometime this summer.

If you want to give it a try, head on over to Microsoft’s Office for Mac page – you can install it alongside your older version of Office if you want. Just keep in mind you’ll have to be running OS X Yosemite to get it installed.