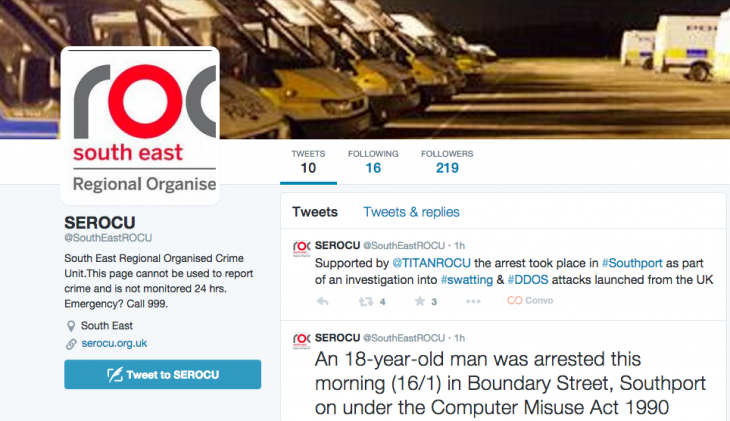 Lizard Squad, the group that claimed responsibility for taking down the PlayStation Network and Xbox Live over Christmas, have been pursued relentlessly by law enforcement authorities ever since. UK police have made their latest arrest of a man they claim is a member of the group today.

The South East Regional Organised Crime Unit (SEROCU) announced the arrest on its newly-created Twitter account. It cooperated with the FBI in the arrest of an 18-year-old man in Southport, related to “the denial of service attack of Sony PlayStation and Xbox systems in 2014 and swatting offences.”

The unnamed individual faces two charges under the Computer Misuse Act 1990 and Section 16 of the Offences against the person Act 1861. The second charge covers the ‘swatting’ incidents, which involved false reports via Skype that sent armed police to a target’s home in the US.

Read next: LizardSquad’s DDoS Tool Is Powered By Home Routers

Read next: UK telecom regulator mulls 6GHz spectrum use for 5G services by around 2020