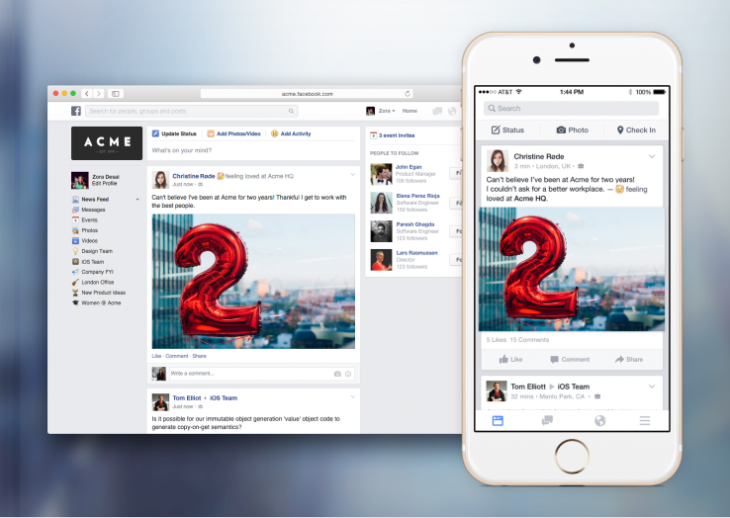 Opening up your social media accounts at work is generally taboo, but Facebook is now fighting against that notion.

The company is today launching a new product dubbed Facebook at Work, reports TechCrunch, which would allow businesses to create their own self-contained social network among their employees. Users can access these networks through Facebook’s site and via new Android and iOS apps (simply named ‘Work’).

The platform is meant to mimic Facebook’s familiar appearance and behavior – News Feed, profiles and all. The ‘Groups’ feature becomes particularly important for communication in the workplace iteration; Facebook believes it could effectively replace email within a company.

Users have the option to either create a separate work login or connect through their existing Facebook accounts; actions performed on Facebook for Work won’t show up on an employee’s regular profile.

That said, Facebook at Work has two key differences from the standard product: it won’t be feeding you ads and tracking your data. This also means it’s not yet clear how the company will make money – the app is currently being offered free for pilot testers – but an eventual subscription service is most likely.

Of course, other tools like Slack and Yammer have already gained traction in replacing email for internal company communications. Slack in particular has seen tremendous growth in the short period of time its been available. And though Facebook says it won’t be tracking your data, this will likely not overcome some users’ doubts over the company’s handling of privacy issues.

On the other hand, Facebook for Work’s main advantage is familiarity; employees wouldn’t have to learn their way around a new interface to use the tool. Smaller businesses looking for a simple and intuitive way to encourage communication among employees could find a lot to like in a platform they’re already used to.

We first reported on rumors about Facebook at Work back in November, when we noted the company had likely been working on the product for at least a year. You probably won’t be able to try it out yet though; the company is releasing the product to app stores today, but it will only be available to a small group of partners.

Read next: New Nintendo 3DS and 3DS XL launching in the US and Europe on February 13