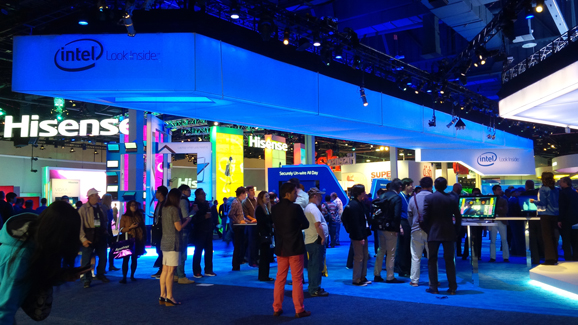 Insert joke about how quickly the week flew by like drones at CES.

Napier, Robbie and I had a great time covering CES this year! As we look back at the week that was CES 2015, here’s some of biggest news to come out of Vegas, along with the silliest things off the show floors.

For those who missed our daily recap, check them out below:

US-based TV watchers were excited by this week’s announcement of Dish’s Sling TV — a $20 per month subscription service to select cable channels. It’s got a great mix of channels for everyone — kids, sports lovers, foodies — but the service aims to please one general demographic: cordcutters.

Will you be making the move to canceling your cable service for Sling TV?

We also got a glimpse at Mercedes-Benz’s vision for the autonomous car of the future, the F 015. With a Jetson-like seating cabin, LED front and back lights, and self-parking and self-driving mode, the concept car of future looks incredibly luxurious. Which begs the question: When cars become autonomous, will racing games and VR headsets be the only instances of driving we’ll get to perform?

One of the our most popular CES posts was about a product that wasn’t even on display at the show. An Audi representative was spotted wearing a custom Audi and LG smartwatch running WebOS. Not much is known about the watch other than what it looks like, but we think it’s one of the most beautiful smartwatches out there today.

Drones were all the rage at CES 2015. You can hardly turn a corner without fearing one will fly into your face.

If you’re Intel, however, this is not quite the issue as it is developing a smarter technology to ensure safety around these flying robots. It’s also using RealSense tech to power beautiful 3D displays and holographic interfaces.

Some of the drones we found also had unique use cases, such as the Parrot eXom by SenseFLY. Built to help monitor and inspect construction sites, the drone is designed to not only help make the world more fun, but more secure.

Of course, we couldn’t mention CES 2015 drones without revisiting the Nixie, Intel’s selfie-taking drone. Which brings us to the next topic…

I take it back — drones were kind of the bee’s knees at CES 2015, but selfies were 100 percent of the rage. Many conference attendees came armed with selfie sticks ready to photograph themselves with the year’s latest and greatest in tech.

For us, we stuck with various companies’ photobooths to help snap the perfect pic. From 3D selfies (a bit scary) to 360-degree action shots (amazing), the future of self-portraiture is no longer just for teenagers and celebrities.

While CES is a great place to discover cool new gadgets, it has always been the place where companies announce the latest in television tech. This year was no different — with Sony, LG and Samsung all showcasing their latest 4K TVs, some with impressive curved displays.

Gone from the show floors? 3D TVs and their silly overpriced glasses. I think I speak for most of us when I say we won’t miss it when it goes. Instead, we’re looking forward to seeing more affordable 4K TV and HDR content headed our way in the coming months.

There were many things we would’ve like to cover at CES but didn’t get the opportunity. For anything you may have missed, check out our social channels on Facebook, Twitter, Vine, Instagram and Pinterest. Thanks for following along, and we look forward to a very techy 2015!

Read next: Twitter is reportedly planning to spread its ads to third-party sites