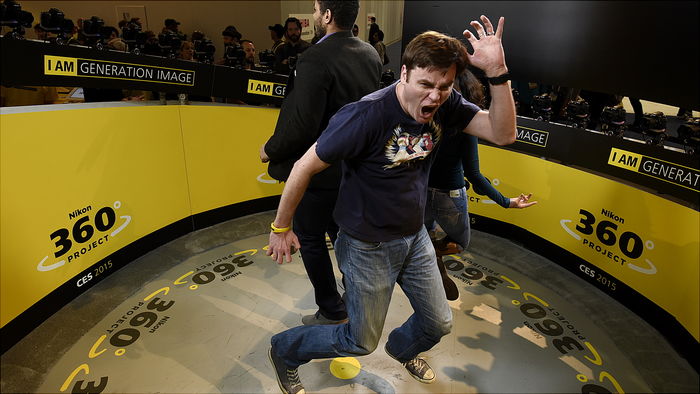 We didn’t plan it this way, but it just happens that we spent most of today checking out photography-related topics – from GoPro accessories to 3D cameras and a super cool team selfie with Nikon.

GoPro cameras can produce some of the internet’s most fascinating clips, but they are hard to use if you’ve got a case of the shaky hands. Tiffen aims to remedy this with its Stedicam Curve handle to keep your camera focused on the subjects being shot, producing professional-quality clips. Or as Robbie puts it, perfect for when you’ve had one too many Red Bulls.

Meanwhile, Napier checked out interesting use cases for Intel’s 3D camera technology, RealSense. In one instance, the camera is used as an interactive holographic display, with an unintended haptic feedback that gets you feeling like you’re truly touching the images. Check out more from RealSense here!

Lastly, Robbie went hands-on with Samsung’s Milk VR service, designed to work with its Gear VR headset. Previously, Gear VR offerings are limited to a few short gaming demos. With Milk VR, you can immerse yourself in a virtual situation, like skydiving or getting a 360-degree view inside of a music video.

I’d missed the 10:30 AM cutoff time for a free shuttle to the convention center. Thankfully, BMW came to the rescue – and in the most luxurious manner possible. The team offered me a free test drive of the BMW i8 – recently launched in September 2014 – for a ride down the Vegas strip. Definitely beats waiting in line for a taxi!

Before we depart Vegas tomorrow, we took the opportunity for a unique team selfie at the Nikon 360 Project. Using 48 cameras that fire simultaneously, Nikon stitched the photos together to create an awesome 360-view of a single action shot. Check them out!

Read next: Google is donating nearly $300,000 to Charlie Hebdo