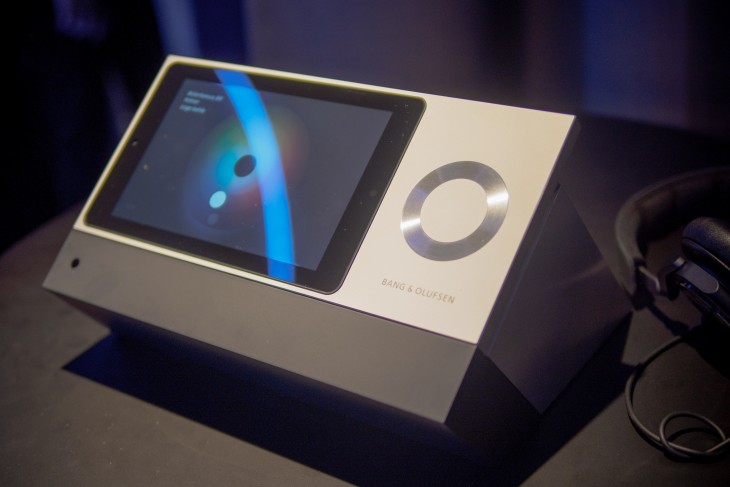 Something as simple as picking what song to play should be easy, but I often find myself spending too much time deliberating on my music choices when hosting friends or wanting some ambiance.

Bang and Olufsen recognizes this issue and wants to streamline the “domestic music experience” with its new BeoSound Moment streaming device. On its default configuration, the device is a minimalist wooden panel that rests on a base and lets you start playing music with just a tap; a circular portion of the the wood is touch sensitive. Fancy.

The Moment will then use something called ‘Pattern Play’ to learn your listening habits based on the music you play at different times of the day and week. It’s a similar idea to Nest‘s thermostat regulation, and it will likewise get better the more you use it. You can also use the touch sensitive part to control volume or skip tracks.

It’s a dead simple streamer that just tries its best to play music based on your habits while blending into the background of your home. No screens, no distractions.

On the flip side – literally, you flip the device over – you have a metallic face and touchscreen that resembles a giant iPod nano. Here you are able to control music stored on either your local network or outside sources to let you browse through the standard classifications of genre, album and artists. B&O says it will be curating music suggestions to make your choices easier, however.

The system pulls its music from Deezer (12 months of the service are included), and you can listen to Internet radio via TuneIn or access your stored music with iTunes. You can also use the device for Bluetooth playback from your phone so you can stream Spotify or Pandora, or plug in your device for a direct line to your sound system.

My favorite feature, however, iss something B&O calls the MoodWheel. It’s a colorful circular interface that lets you tap around the displayed spectrum to play music based on your mood. Tap around the blue side, for instance, and the device tended to play something at a slower tempo, like classical or smooth jazz. Touch the opposite side, and you’ll get something much more aggressive or fast paced.

Additionally, you can tap near the center to play music your more familiar with, or tap around the edges if you’re feeling more adventurous. It worked quickly and seemlessly throughout my hands-on.

Of course, I couldn’t really try out the Moment’s intelligent playlists in such a short session, but there are some cool ideas at play here. It’s able to maintain a spartan interface while giving the user plenty of choices. You could could get home, tap the wooden side, and let the device work its magic. Or you can get more in depth with the MoodWheel or specific song choices if you want.

Also nify: you can pass around the tablet during a party to let your friends have a go at DJing, instead of having them borrow your phone and see that embarrassing text from your mom.

B&O also says there will be new features pushed to the device with firmware updates; multi-room music streaming with B&O devices is in the pipeline, for instance. Sales start from B&O stores on January 30, but the Moment won’t come cheap: it will retail for $2,795 in the US, £1795 in the UK and €2195 in the rest of Europe.

➤ BeoSound Moment, the intelligent and playful music system that matches your mood [B&O]