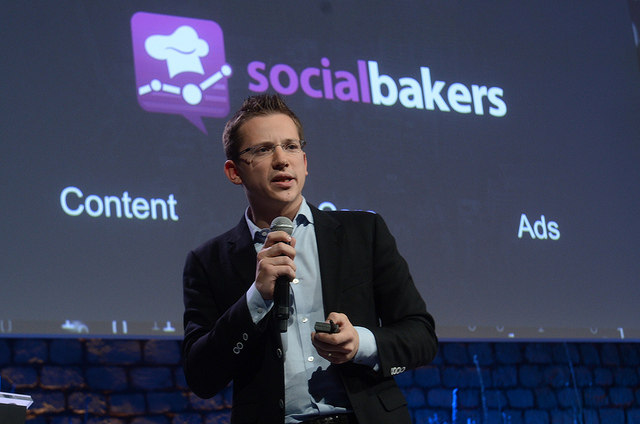 With social media taking an increasing role in the modern world, social analytics services are seeing a significant boost in demand and, therefore, revenues. A good example is Socialbakers, a six-year old Prague-based company that has raised $34 million in funding to date and has grown to over 300 employees in 13 offices all over the world.

Despite the significant amount of money poured in, its founders and employees still own “a little over half” of the company, Socialbakers CEO and co-founder Jan Rezab told The Next Web during the Web Summit 2014 in Dublin. With more than 2,500 clients ranging from small firms to international giants, the company is gearing up towards conquering the US market and is considering the possibility of going public next year.

For a company whose main business is looking as deep as possible into the ‘virtual worlds’ of social networks, Socialbakers has quite a lot of physical offices. As of November, it’s headquartered in Prague with major offices in London, New York, Mexico, Sao Paolo, and Singapore, as well as smaller ones in San Francisco, Dubai, Istanbul, Sydney, Melbourne, Munich, and Paris.

“It’s because our business is marketing, and marketing is based on a human touch, everywhere,” said Rezab, who was only 21 years old when he co-founded Socialbakers. “And I think technology is moving in the direction where you have to have small local hubs with client relationships people for your enterprise clientele to talk to.”

Among the clients that the company tries so hard to be closer to Rezab named the giants like Nestle, LVMH and Danone, as well as NHL and the Australian Ministry of tourism. Most customers, however, are middle to large enterprises, with an example of “middle” defined as a coffee shop chain with 30 locations.

What really has radically changed since the company was launched is that today its new prospective clients already use social analytics tools, while a few years ago the necessity to have such a thing often had to be explained.

About a third of Socialbakers’ employees are engineers working on analytics tasks, which often involve quite serious mathematics algorithms. One of them is the so-called predictive engine, a tool that, as Rezab said back in 2012, was able to predict the results of presidential elections in the US.

“We knew the outcome [of 2012 US presidential elections] two weeks before. We knew it would be close as well,” said Rezab. “The only thing that has changed is that predictions got more accurate. I’m very much looking forward to the next elections.”

The same predictive engine was used in a recently developed algorithm that can determine if a certain post on Facebook was promoted, which can’t be plainly seen through the API. In Rezab’s opinion, the engine is a universal tool to predict anything for companies with significant social presence, but there are few customers at the moment that can really use it.

“I could build a predictions engine in three months from now — the market is not ready for it,” he said. “We believe that the path to predictive analytics starts with basic measurement […], and then the real-time component gets thrown into the market. But when only 5-to-10 percent of companies use real-time analysis, we can’t really talk about predictive analytics. As a subset of the real-time analysis, it’s not a viable market as of yet. It will be — maybe in one year, maybe in two years.”

Among other plans that Socialbakers has for the observable future is to become “the flagship startup” of Eastern Europe in the same way as Skype was the star of the Baltics.

“Hungary has Prezi, Slovakia has its flying car now, there’s a lot of interesting things going on in CEE,” Rezab said. “But CEE needs its flagship startup, its spokesperson in a way, “the exit.” We have security companies, but it’s boring; AVG, Eset, Avast are all billion dollar companies but it’s kind of like the old world, and we need the new world.”

At the same time, Rezab says the company “doesn’t say no” to the perspective of an IPO.

“We’ve been doubling the company’s size every year for a while now. [Let’s] do that one more time — and [we will] make that decision.”

But before going public, assuming the IPO is to be held in the US, the company has to gain some traction on the American market, which so far has not been too welcoming. Now the US seems to have become a priority for Socialbakers, which also bought Chicago-based EdgeRank Checker in June.

“All the car makers in Europe and most of them in Asia are our clients, but only half or even third of them in the US are,” Rezab explained. “They deal with dealerships independently, it becomes another ballgame.

“We underestimated the market [in the US], said we’re going to [treat it] as any other market, enter it like Singapore or Mexico. But we don’t do that anymore, we’re putting the money, the budgets, the people on the ground, and that’ll work.

While taking care of his own business, Rezab admits to closely following the tech startup scene in Eastern Europe. Being a social media aficionado, he teased a $600,000 investment he made recently in an unnamed Prague-based social network that is supposed to launch before the end of January.

“You will smile when you see it,” he concluded without explaining further.

This article was edited on December 4, 2014 to remove one Socialbakers client listed, following clarification from the company about its client list.

Read next: Windows Phone gets a BBC Sport app, but no sign of BBC News yet